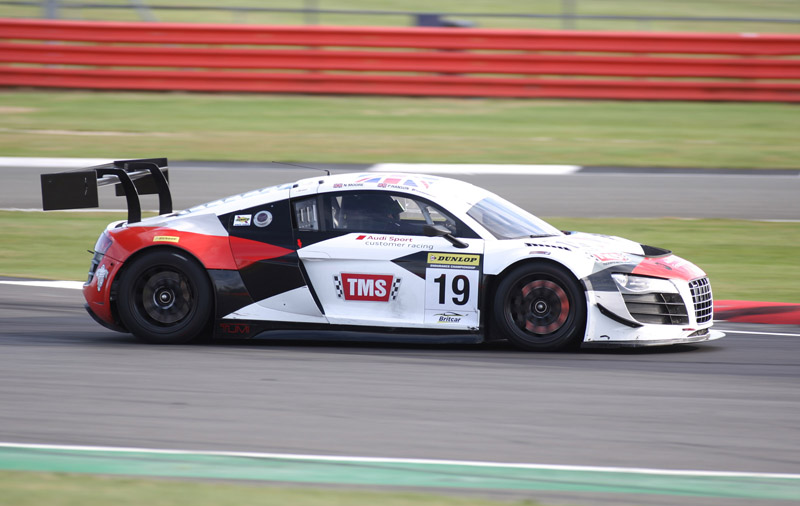 If this season has proved anything, it’s proved that winning these races is all about matched pairs, consistent lap times, and of course, speed, preparation, and playing the strategy. Tockwith Motorsport tick all of these boxes, and once again Phil Hanson and Nigel Moore took the Audi R8 LMS to a convincing win in the 150 minute race.

Qualifying
That’s not to say they were the quickest out there for this event, though; that claim must go to Calum Lockie. Having let co-driver David Mason take the lion’s share of the Free Practice session in the FF Corse Ferrari 458 GT3, he was unassailable in the 30-minute qualifying session, the best part of half a second quicker than more’s quickest lap in the Audi. The Scot had also paved the way for Mason to take a close-shave win in the day’s earlier GT & Production race, so was fired-up for the endurance encounter. FF Corse headed the Class 2 contingent too, novice Bonamy Grimes returning with pro-driver Charlie Hollings in the red and white Ferrari 458 GT3, ahead of the midnight-blue version of Leyton Clarke and Simon Atkinson, while the similar yellow machine of Mike Anthony Wilds would be starting from the back row of the grid, after an electrical gremlin caused them to miss all of the official sessions, though they had satisfied the officials with some out-of-session laps.
The third row of the grid was multi-class – the MacG Racing Taranis next to the SG Racing Porsche 997, newly-elevated to Class 2, then it was the front-runners of the Class 3 contingent – arch-rivals Century Motorsport (Ginetta G55) less than half a second ahead of Whitebridge Motorsport (Aston Martin Vantage), with the Bespoke Racing Porsche and the WDC Racing BMW M3 GT4, both with three-handed driving squads, sharing the fifth row. Mike Moss’s Class 4 BMW M3, another three-hander, headed row six, alongside the Class 5 Synchro Honda Civic Type R, then the last of the timed runners, the Hoffmans of Henley Lotus Europa, which was no more than running in an engine newly rebuilt by Fabio Randaccio himself, with newly-appointed co-driver Ben Salmon getting acclimatised.

Race
Nigel Moore got the jump on Lockie at the rolling start, and the Audi led for the first 15 laps, at first eking out a lead of around five seconds, before the red Ferrari started to claw back, Lockie punching in a fastest lap as he regained territory, then seized the lead.  Behind the two leaders, Leyton Clarke’s 458 Jonny MacGregor’s Taranis and Mark Cunningham’s Porsche, while the Ferraris of Charlie Hollings and Anthony Wilds were making rapid progress through the field, Wilds from his back-row start, and Hollings from the pit lane, after the FF Corse squad needed to fix an electrical glitch discovered in the closely-preceding  GT & Production  race.

The Class 3 lead battle was once again raging – Jonny Cocker in the Aston Martin had led Jacob Mathiassen’s Ginetta G55 from the start, and the two were separated by a slender margin when Cocker pitted early, just 35 minutes into the race, a planned strategic move to give Chris Murphy the maximum allowed stint time. “I jumped the Ginetta at the start, but this circuit is long straights and technical sections, and each car has it strengths of various sections. I had a clean stint and looked after the tyres” said Cocker as he cooled down after his stint.

It wasn’t long before some of the heavy-hitters starting pitting either – just 45 or so minutes in, and Charlie Hollings brought in the #5 Ferrari for Bonamy Grimes to take over, them Nigel Moore gave way to Phil Hanson to take his stint in the Audi, which by this point trailed Lockie’s leading car by around a quarter of a minute. Then it was the Taranis, MacGregor handing over to new recruit Ben Sharich, and Anthony Wilds, the yellow Ferrari being taken over by a somewhat disgruntled dad Mike. The atypical 150-minute duration of this race led to some unusual strategies, with some runners making their first mandatory stops well within the fuel range – Jacob Mathiassen was in well before the first hour had elapsed, relieved by Steve Fresle in the Ginetta G55, Rob Young let Neil Garnham take his stint in the WDC Racing BMW GT4, and Leyton Clarke was the last of the FF Corse Class 2 458s to stop, Simon Atkinson Taking over.

Not leader Lockie though – he was making the most of the competition being strung-out around the track, and building as big a lead as possible for David Mason to inherit. It was dead-on the 60-minute mark when he pitted, leaving Mason a clear hour behind the wheel before the Scottish pro-driver climbed back in for a final half-hour blast. Following him in were Mark Cunningham’s Porsche, David Cooper, who had enjoyed an impressive opening stint in Mike Moss’s BMW M3, and Ben Salmon, handing the Lotus Europa to Fabio Randaccio. The little Lotus wasn’t out on track for long, though, straight back into the garage with a gearbox issue that the small team fixed fairly quickly.

Mason has resumed in the lead, but Phil Hanson was making short work of the 55-second gap between the Ferrari and the Audi, taking out six seconds a lap, and within 10 minutes had seized the lead, and started to build a buffer. Mike Wilds had the bit between his teeth, and was catching stablemates Grimes and Atkinson, a task made easier when Grimes’ challenging day was compounded by a puncture for the 458. Mason was Wilds’ next target, and the yellow Ferrari was in second place by lap 77.

A sheared hub left Ben Sharich’s Taranis stranded out on the circuit, causing the Safety Car to be deployed with exactly an hour of the race left to run. It picked up Dave Benett’s Porsche to head the crocodile, which was waved past at the earliest safe opportunity, and immediately pitted, an opportune moment for Marcus Fothergill to take over for a final stint, since Adam Dawson had completed to opening session. Middle-stinter Mike Moss also pitted, ace spannerman Ashley Bird taking a turn in the Moss Motorsport BMW M3.

The caution was lifted after five laps, but within 15 minutes the SC boards were out again. Peter Cunningham’s Porsche had been blocked-out in an overtaking move and spun at Vale, and,  broadside across the track, was struck by Dan Ludlow, who had taken over the Synchro Honda Civic from Martin Byford. Both eventually limped back to the pits, leaking fluid, but their race was over.

Cue for pit stops, then. Grime’ Ferrari was first in, though this wasn’t particularly planned that way; “We pitted as planned, but it was just as the Safety Car came out, so we could only take on 25 litres  of fuel, and had to go round and come in again for more” he said. Also double-stopping was the Audi, and the Wilds Ferrari, both cars handing over to their original first-stint drivers for the final period. David Mason was constrained by his stint-length though, and didn’t come in till the track went green again, with just half an hour of the race left. Jonny Cocker got back into the Aston Martin at this point too, his nemesis now rescinded since the Century Ginetta had by now retired with propshaft failure. He would have to work though, for in the middle period the Bespoke Cars Porsche had jumped ahead to the Class 3 lead.

So, a run to the flag now – Nigel Moore had a lap over Leyton Clarke, who had taken over the #4 Ferrari from middle-stinter Atkinson, but he had Anthony Wilds similar car bearing down on him, the audacious move for second position taking place at Abbey with 20 minutes left. Nobody could match Lockie’s pace today though, even Nigel Moore having no answer and waving the flying Scot past to unlap himself from the Audi. .

It was another textbook victory for Tockwith Motorsport after 121 laps, well strategised by the team and perfectly executed by Nigel Moore and Phil Hanson. Mike and Anthony Wilds day had started disastrously (they were in their civvies by early afternoon and ready to go home), but they more than salvaged the day with a fired-up performance that earned them second overall and the Class 2 victory in the DSM Motorsport with FF Corse Ferrari 458, with stablemates Leyton Clarke and Simon Atkinson trailing by just over six seconds at the flag, and classmates Bonamy Grimes/Charlie Hollings having a fuel issue right and the end, dropping them to third in class. Despite his final thrash, which earned him the fastest lap of the race, Calum Lockie was fourth overall, and second in Class 1, the final step of that class podium being filled by Jonny MacGregor and Ben Sharich, who had done enough to be classified after a second wheel failure put paid to their race 10 minutes from the end.

Class 3 – now there’s a turn up for the book! The Bespoke Cars Porsche took the honours, Adam Dawson, Dave Benett and Marcus Fothergill using all of their resources in a fine victory. “It was the Safety Car that did it – we were at the front of the train and got waved past, which more or less gave us a free pit stop” admitted Benett. Jonny Cocker excelled in his final pursuit after Chris Murphy’s long middle stint, and the Whitebridge Aston was just over 30 seconds adrift of the class win at the finish, with the BMW M3 GT4 of Rob Young, Neil Garnham and Matt Le Bretton coming home third; it’s coming good for the WDC team after a shaky start earlier in the season. And – at last – the Hoffmans of Henley Lotus Europa made the finish after a supreme effort to get the car to the grid, a solid stint by new-boy Ben Salmon, and the usual close-to-the-edge antics of Fabio Randaccio.

It was a busy day for Moss Motorsport – a class and an overall victory in the two GT/Production races, and a fine opening stint by single-seater refugee David Cooper set the scene for the Class 4 win, eighth overall, in the BMW M3, while Synchro Motorsport’s Honda Civic was classified as the Class 5 winner, despite that late race clash.