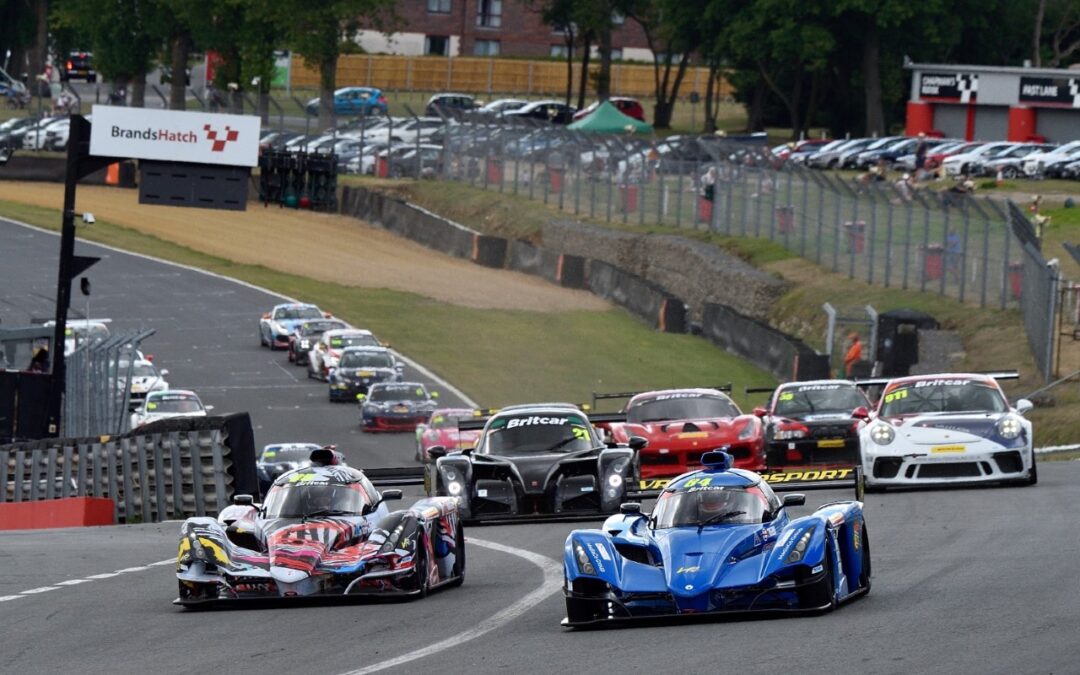 The turbocharged Pragas had locked out the front row of the grid, and Jem Hepworth led the pack into Paddock as the red lights went out, with Garry Townsend behind, and some fast starts beIng made by Mark Cunningham’s Porsche and Martin Byford’s SEAT TCR. Hepworth eked out an early lead worth a couple of seconds, though Townsend was tenuously holding off Ben Dimmack’s Radical RXC and the Valluga Porsche 911 of Adam Hatfield. The Radical was soon in the pits to retire though, a bearing in the gearbox having collapsed and thrown a shaft through the transmission casing. Mike Moss didn’t get the best of starts in his BMW 1M, but was carving through the pack, seizing the Class 2 lead from a no-heroics Paul Bailey in the SBR Ferrari 488, then interrupting a Class 4 battle between Byford’s SEAT and Sean Doyle in the CJJ/Valluga Porsche Cayman 718, as the black and green BMW moved up to fifth overall.

Dave Scaramanga had a quick spin at Graham Hill in his Motus One Ginetta G55, and rejoined, while an early pit stop was made by Adam Thompson’s Newbarn Racing Jaguar F-Type. The totally new race team with a unique car finally diagnosed nothing more than a blown fuse, but much time was lost, and, though taking the flag, they had done too little running to be classified.

So, a quarter of an hour into the race, and Hepworth had a lead over Townsend which fluctuated around three or four seconds, depending on traffic, while Hatfield led Mark Cunningham, third and fourth and disputing the Class 3 lead, with, and – here’s a surprise – fifth overall, Class 4 leader Luke Davenport in thew new-to-UK Ligier JS-2-R, what was up to now an unknown quantity now very firmly being known. Behind Moss’s BMW and the Doyle / Byford skirmish, Paul Bailey’s 488 led a close-coupled train of Jonathan Evans’ rapid BMW GTR, Marcus Fothergill’s Porsche and Warren McKinley’s Praga R1, which had made amazing progress from a pit-lane start after missing qualifying due to a small fire.

Once the pIt window opened, Jem Hepworth and Paul Bailey were the first in, followed a lap later by second-placed Townsend, and Will Casswell, who would hand over the Corton & Millar SEAT to Marc Kemp, followed on consecutive laps by a number of others. Staying out, though, were the faster drivers of their pairings – Mark Cunningham’s Porsche, Luke Davenport’s Ligier, Mike Moss, Sean Doyle, Marcus Fothergill, Martin Byford were now in the leading positions, followed by Bobby Trundley’s Team BRIT Aston Martin, Nathan Wells’ BMW GTR and lone-driver Tim Docker’s Golf TCR.

The simplest of electrical issues ruined the #88 Jaguar’s race

Moss and Trundley left it until the bitter end, sneaking in through a small gap as the pit window closed, and once the field settled, we had Danny Harrison re-establishing the lead that Jem Hepworth had built over the blue Praga, now driven by Jack Fabby, with Benji Hetherington, now in the Valluga 911 Porsche third, followed by the Class 2 battle between Andy Schulz’s Ferrari and Charles Lamb in the Moss BMW 1M, while cutting through the field now were Tom Bradshaw, in the BMW GTR started by Jonathan Evans, and Jonny MagGregor, who had relieved Ben Sharich in the MacG Racing Taranis. Bradshaw made very short work of his task – Aaron Morgan’s Aston, Ash Woodman’s SEAT, and the Ligier now driven by Marcus Vivian were picked-off almost on a lap-by-lap basis, to attain the Class 4 lead, while Ollie Hancock, having taken over the Digiplat BMW from Nathan Wells, was also moving up the order.

There was drama for Andy Schulz, pitting the SBR Ferrari started by Paul Bailey from the Class 2 lead with a sheared front left track rod arm with just 20 minutes of the race to run. Stuart Bitmead’s team fixed the issue in around five minutes, and Schulz rejoined to salvage what he could of the race – third in Class 2 when the flag fell.

Tom Bradshaw, not content with class honours in the BMW, was now chasing overall positions, and was on the tail of Peter Cunningham’s Porsche 997. They came up to lap Dave Benett’s 991 at Paddock, and there was a melee as Cunningham, alongside the BMW, and with little room to manoeuvre, tagged Benett’s Porsche, which spun onto the grass down the hill on the inside of the circuit, causing Colin Sowter, watching the confusion unfold in front of him, to take to the gravel in his Ferrari 458. All cars were on their way again, Benett slightly later than the others, and Bradshaw was now seventh overall.

So Danny Harrison took the win over Jack Fabby, the two Pragas finishing just over nine seconds apart, and two laps over the rest of the field, which was headed by Benji Hetherington, capitalising on Adam Hatfield’s excellent opening stint in the Valluga Porsche 911, claiming the Class 3 victory. Fourth, and bagging Class 2 honours, was the VR Motorsport naturally-aspirated Praga after a storming final stint by Martyn Compton, taking over after Warren McKinlay’s equally stirring drive from a pit-lane start. This was a popular victory, particularly as Compton was celebrating what he termed his "bangaversary", 14 years to the day that he sustained serious injuries whilst on active service in Afghanistan, and with the Praga liveried in a camouflage theme. Class 2 runner-up Charles Lamb was half a minute adrift in the Moss BMW 1M, with Jonny MacGregor claiming the final Class 1 podium place in the Taranis. 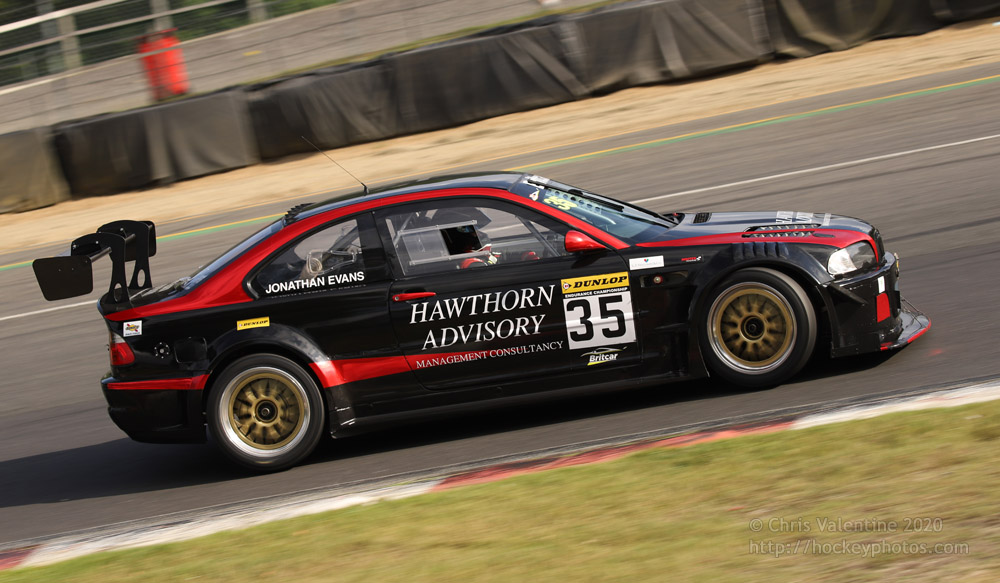 Jonathan Evans and Tom Bradshaw punched above their weight to secure the Class 4 win in the CRH Racing BMW GTR, ahead of the similar machine of Nathan Wells and Ollie Hancock, the pair sandwiching Class 3 runners-up Mark and Peter Cunningham, who claimed the class top points as the first registered runner home. Marcus Vivian, in the Ligier, was staving off a storming effort by Ash Woodman in the SEAT in the closing laps, just half a second separating them when the flag fell – one more lap and it may have been different for the last step on the Class 4 podium.

Aaron Morgan and Bobby Trundley did well in their debut in the Team BRIT Aston Martin, finishing fifth in Class 4 ahead of Tim Docker’s VW Golf, while Nicole Drought was getting to grips with tight UK circuits in the Cayman 718 shared with Sean Doyle, finishing seventh, in front of the 781 version of lone-driver Peter Erceg, the Ginetta G55 of Dave Scaramanga and Will Powell, and the Will Casswell/Marc Kemp SEAT. Colin Sowter, in his newly-acquired Ferrari 488, was third in Class 3, ahead of Nick Scott-Dickeson, a courageous effort whilst rehabilitating from surgery, in the Team Hard Porsche shared with Eric Boulton, while Marcus Fothergill and Dave Benett were denied a good result after the late-race punt in their Bespoke Cars Porsche 991.