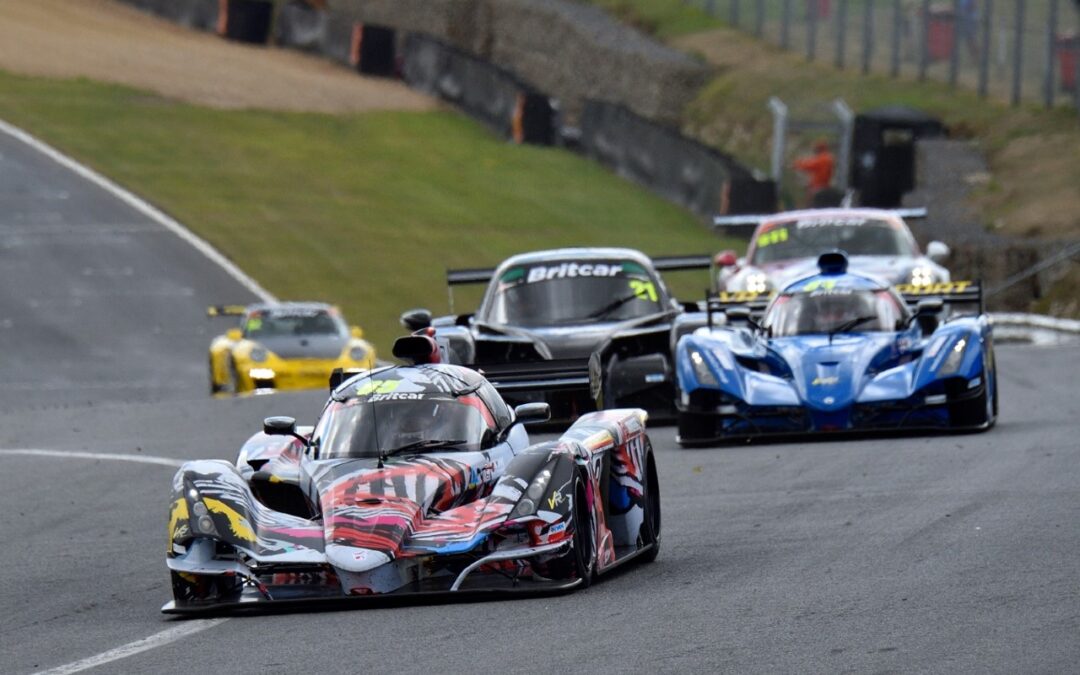 It was noted by a veteran motorsport journalist on Saturday evening, that never before has a car that was central in a red-flag incident rejoined a re-started race, let alone to go on to win. But that happened in Race 2, where the VR Motorsport Pragas once again staged a convincing 1-2 victory.

The MacG Racing Taranis was at first withdrawn from Race 2, then re-instated minutes before the start; Low oil pressure at the end of Race 1 caused Jonny MacGregor to close the door, but the team’s spannermen were having none of it, and were able to fix the concern and get the car to the grid, albeit on an old set of slicks. Additionally, Charles Lamb’s Moss Motorsport BMW 1M and Sean Doyle’s Cayman both started from the pitlane, and Nathan Wells’ BMW GTR joined the race six laps in after engine repairs.

The grid was decided by the result of Race 1, and this time it was Jack Fabby that led the pack away, followed by Jem Hepworth, and Martyn Compton, making it a Praga 1-2-3 up the hill to Druids. Fast starts – again – by Mark Cunningham’s Porsche and Martin Byford’s SEAT saw them well-placed, and there was a spin by Marcus Vivian’s Ligier that the pack managed to avoid. Mark Cunningham took the fight to the Valluga 911 this time, a few laps of harrying, and some side-by-side action, and he was free, relieving Compton’s Praga of third place too. Adam Hatfield wasn’t giving up on the Class 3 fight though, he soon took the Valluga 911 past Compton too, and was back on the tail of Cunningham’s 997, and Paul Bailey had quickly worked the Ferrari 488 from the back of the grid, and passed Ben Sharich in the Taranis for ninth place, while in the midfield, Aaron Morgan’s Aston, Colin Sowter’s Ferrari, the Porsche’s of Eric Boulton and Marcus Fothergill, and Tim Docker’s Golf were all together.

There was a clash on lap 13, that saw Charles Lamb’s BMW 1M in the pit wall and the second-placed Praga of Jem Hepworth broadside across the track, causing the red flags to be thrown immediately, and, whilst multiple ambulances and rescue vehicles attended, there were thankfully no injuries to the drivers, and in the case of the Praga, very little damage.

The race was re-started with 30 minutes on the clock, reduced from what should have been 40 minutes due to curfew restrictions, with the laps counting-up as a new race, and as soon as the pack was let loose, the pit window was thrown open., with, amazingly the #85 Praga emerging from the pit lane to rejoin the race, with Danny Harrison now at the wheel.

There were a glut of pit stops straight away, but staying out were Mark Cunningham, Jack Fabby, Adam Hatfield, Martyn Compton, Martin Byford and Sean Doyle. 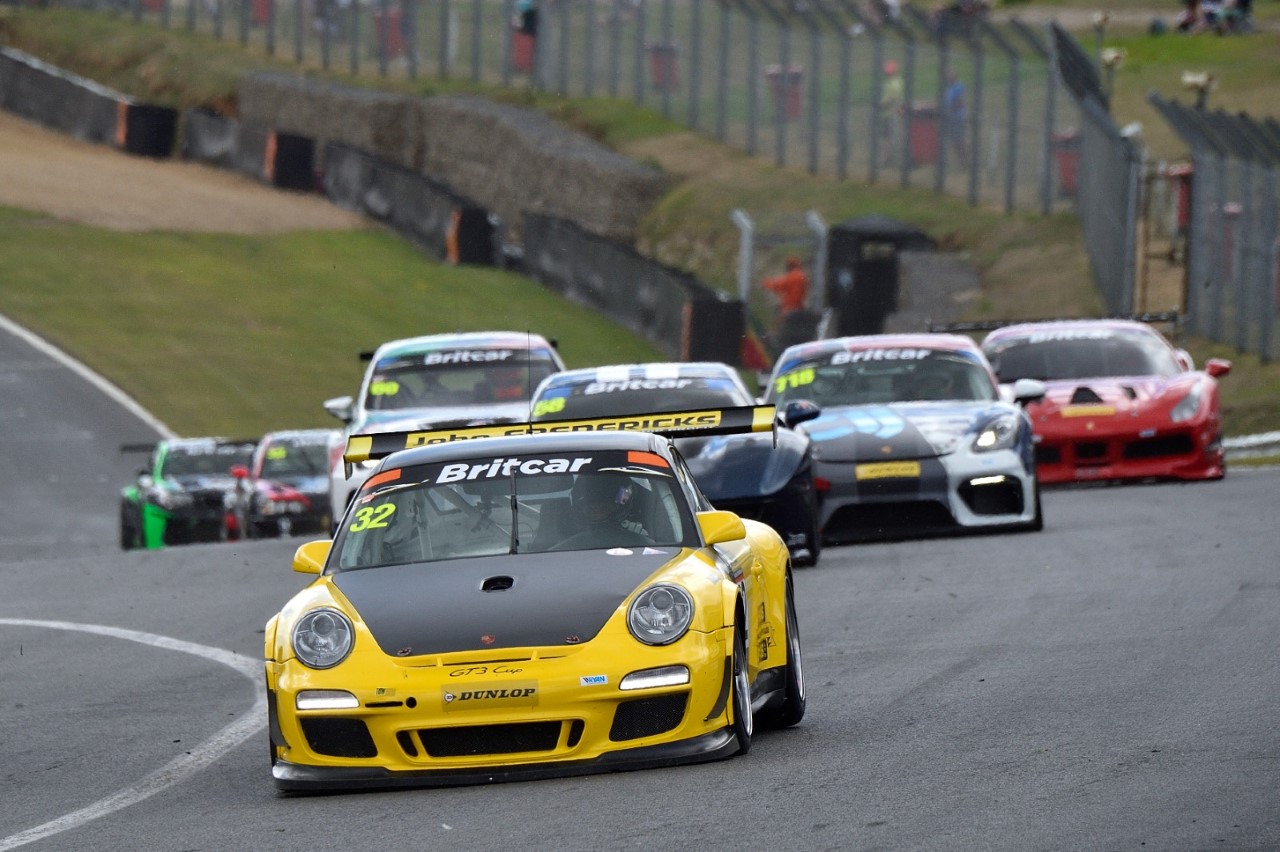 Fabby and Cunningham were late stoppers, but Byford was the very last, and once the field settled, Garry Townsend, who had taken over from Fabby, had a 10-second lead over Andy Schulz’s Ferrari, while Danny Harrison had sliced through the field to third place, eight seconds further back. With 10 minutes to go, Harrison took his Praga "art car" past Andy Schulz’s Ferrari, and four minutes later took the lead from Townsend down the inside at Paddock, cruising to take the flag by a margin of nearly 16 seconds over Townsend, with Schulz a similar distance back in third, the only cars on the lead lap. A massive result for Harrison after what had happened, and seemingly plain sailing for the top three, but plenty of action behind them. Benji Hetherington, in the Valluga 911, clashed with Dave Benett’s 991 in a lapping incident which saw both cars pit, Benett terminally, though Hetherington rejoined to salvage a result.

Ollie Hancock was the man on the move towards the end – with the race re-starting after the red flag, the six-lap deficit that Nathan Wells had initially accrued was wiped out, so the Digiplat BMW GTR was on an even keel with the rest of the runners, and he picked-off the Class 4 opposition, and even the Class 1 third-placed Taranis of Jonny MacGregor, who’d probably seen the best of his tyres by that point, plus the Compton/McKinlay Praga R1, to claim fourth overall, and the Class 4 win. Ash Woodman slipped down the order towards the end in the EDF-run SEAT; Luke Davenport took the Ligier to the class runner-up spot, and a sensational effort by Bobby Trundley in the Team BRIT Aston Martin Vantage started by Aaron Morgan earned a class podium in their GT-racing debut weekend, and the Driver of the Day award for Trundley, who races with autism. In a packed Class 4, on a tight twisty circuit, you will find some unexpected results. Tim Docker, normally in the front-running pack, was sixth in his Golf, followed by Nicole Drought and Sean Doyle’s Cayman 718, which finished only half a second ahead of Marc Kemp’s SEAT TCR, that had been started by Will Caswell. Will Powell was next up in the Motus One Ginetta G55 started by Dave Scaramanga, then Peter Erceg’s Cayman 981, with newly-formed Newbarn Racing’s Jaguar F-type completing the race in the hands of Adam and Callum Thompson, fulfilling their initial ambition of getting the car past the flag.

Colin Sowter was a surprise winner of Class 3 in his Ferrari 458, usual class-toppers Mark and Peter Cunningham finishing 12th overall and the Class 3 runners-up, ahead of the Invitation entries, the recovering Hatfield / Hetherington Porsche 911 and the similar Team Hard machine of Nick Scott-Dickeson and Eric Boulton.

Summing up his race, winner Danny Harrison said: "The damage from the crash was cosmetic, just a few scrapes, and I drove every lap like a qualifying lap. I just don’t know how it happened really!"