You wouldn’t have been able to call this result – well, the win, maybe, but not what happened behind. True, the Brands Indy circuit is short and twisty, perhaps favouring more nimble machines, and diminished competition in the top classes aided Class 3 favourably. With Ross Wylie committed elsewhere, Witt Gamski had lined-up old friend from the South London supercar cohort Joe Macari – who hadn’t raced for a while and not sat in the car before – to share the MJC Furlonger Ferrari 458 GTE, and with the known disparity between Calum Lockie and David Mason in the GT3-spec 458, the smart money was on FF Corse stablemates Bonamy Grimes and Johnny Mowlem to take the win in the Class 2 Ferrari 458 Challenge in the opening 50-minute encounter. And so it was, but not before Lockie has streaked away, as usual, from pole at the rolling start, and built a commanding lead, and by dint of others taking earlier pit stops, the gap over the rest of the field was over two laps by the time he made his mandatory stop on the cusp of the pit window closing. It was a virtual gap though, and along with the other Ferraris, the 150-second pit stop levelled things out, so that Mason returned the car to the track with just a 37-second lead, with world-renowned sportscar ace Johnny Mowlem behind, taking over the 458 Challenge after a solid stint by Grimes.

But we’re getting to the end too quickly here – there’s much more to this race.

Mark Cunningham had surprised himself by bagging Class 3 pole in the SG Racing Porsche 997; "I’m nervous, there’s not a decent straight here to use our power – this is a Ginetta circuit and they’ll be all over us, and were still working round the tyre degradation". Nevertheless, he headed the Class 3 pack well into the race ahead of the squabbling Team Hard Ginetta G55s, and young Ed Moore pushing the Tockwith G50 through their ranks, before things got a bit hot in the 9-year old lower-powered car, and he sensibly adopted a different strategy. Tom Barley was the initial Team Hard leader, after a mercy dash to the team’s base in Strood to collect some new suspension parts, but in the second phase it was the Tom Knight/Darron Lewis 285 car that came good. And that was in no small part down to the residual effect of a late Safety Car period. 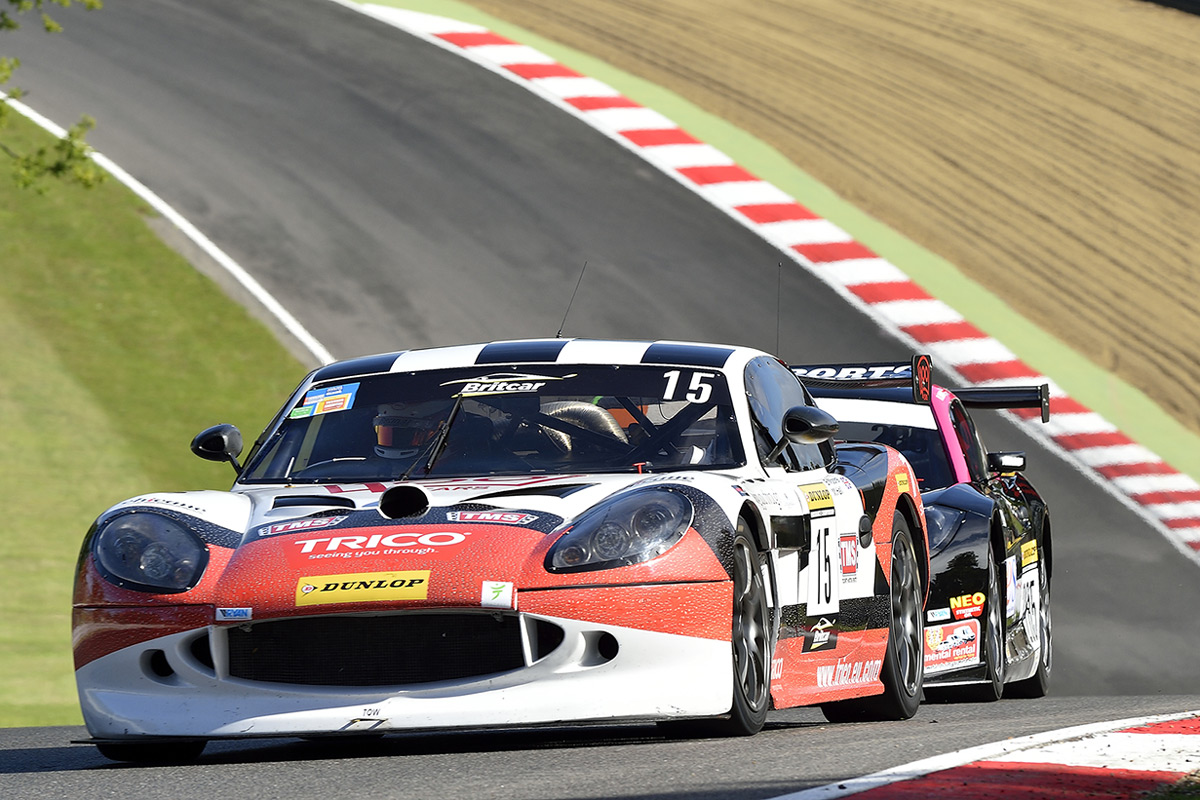 Adriano Medeiros (Eureka BMW E46) and Simon Baker (Moss Motorsport BMW E36) had enjoyed dicing on the track during their opening stints, the former contending with an untried set-up after replacing a damper with one from a "dead" racing E36 in the paddock. Kristian Prosser had taken over the Moss BMW, but in his first outing in a touring car, the regular Formula Jedi pilot misjudged the turn-in at Paddock, and ended up in the gravel, necessitating the deployment of the Safety Car. With 15 minutes left to run, there were no strategic opportunities to be exploited, so, depending on where you were on track, this was going to be a help or hindrance. The Safety Car picked up leader Mason, who had Macari, fifth in the MJC Furlonger 458, behind him and anxious to get back on the lead lap, and into the squabbling pack of Class 3 cars between him and the other Ferraris. The caution was lifted with barely 10 minutes to go – Macari was past Mason as they crossed the line, and Mowlem took the lead on the run down to Graham Hill, then it seemed like just about every other car in the race was ganging-up on Mason’s Ferrari, a swarming mass on his tail through the bends. Simon Rudd’s Ginetta was the gang leader, but slight contact saw the Ferrari tipped into a half-spin onto the grass inside Clearways, the melee leaving a gap on the outside which Tom Knight exploited, and brought the black Team Hard G55 home in second place, on the same lap as the winning Ferrari. Peter Cunningham was a lap down in third in the SG Racing Porsche, completing the unusual but welcome sight of two Class 3 teams on the overall podium.

"The Safety Car did us – we could have been on the podium" rued Witt Gamski after Macari’s fourth place finish (and Class 1 win), and David Mason recovered to finish fifth, and claim the Sprint category victory.

A change of fortune with the Team Hard trio of Ginettas saw the usually-dominant Rudd/Barley car sixth overall, and teenage sensations Angus Dudley/Callum Hawkins-Row seventh, the group this time split by the Cunningham’s Porsche, and causing Aaron, the lead engineer on the 285 Ginetta , to cockily proclaim "this car is running sweetly, this is the leading Ginetta now, you just watch"

The Whitebridge Aston Martin of Chris Murphy/Matty George was fifth in a packed and competitive Endurance-category Class 3, ahead of occasional racer Steve Tomkins and absolute beginner Glebs Stepanovs in the Newbridge Porsche Cayman, whilst in Class 4 of Endurance, a change to the usual stint pattern saw Rob Hudson take the flag for the class win in the Eureka BMW E46, ahead of the Cuda Drinks Ginetta G50 of Richard Burrows/Patrick Watts, which had a run-in along the way with the Class 5-winning Synchro Honda Civic of Alyn James and Martin Byford. 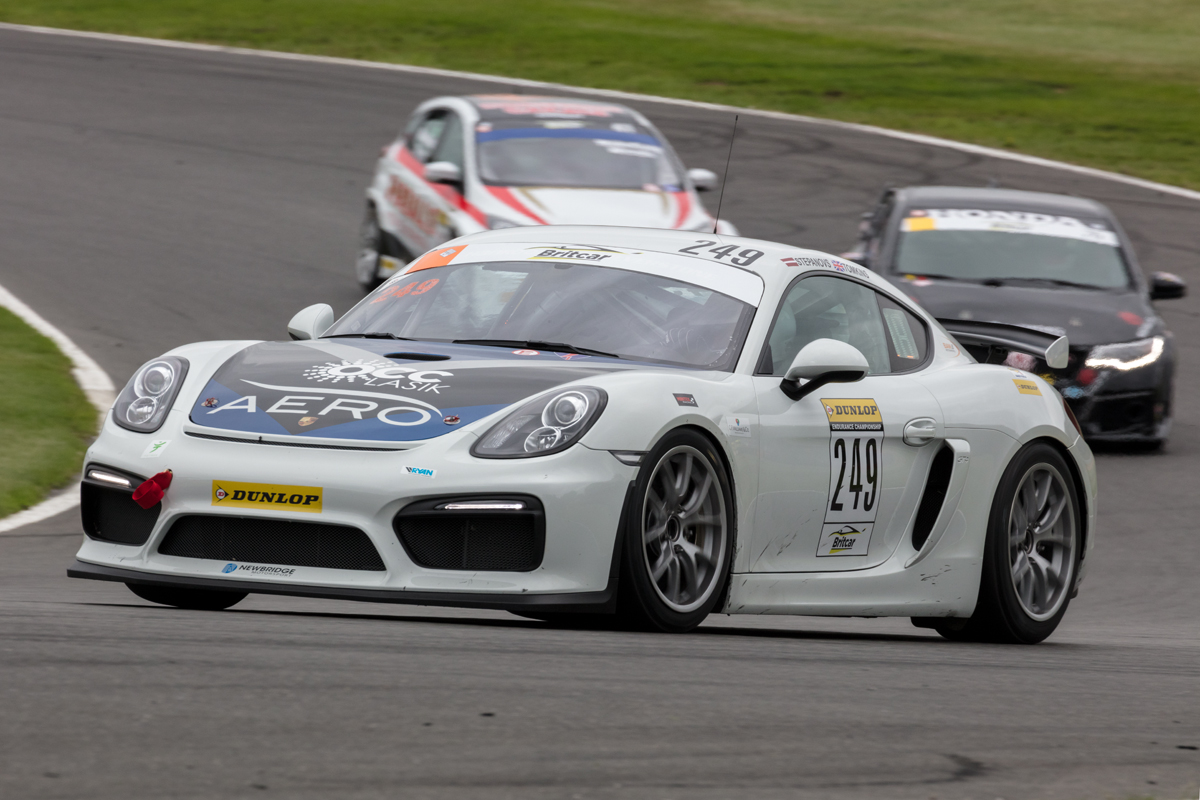 In the Sprint category, best of the rest behind the winning Mason/Lockie Ferrari was the Class 4-winning Tockwith Ginetta G50 of Ed Moore/Marmaduke Hall, its new Trico-sponsored livery proclaiming the famed windscreen wiper company’s commitment to nurturing young driver talent through the Tockwith team and the Britcar Dunlop Championship. The was a Tockwith association with the Class 3 winners too, old hands Marcus Fothergill and Dave Benett taking the spoils in the Bespoke Racing Porsche 997, ahead of lone driver Sean Cooper’s Track Focused Porsche Cayman, whilst in Class 5 post-race penalties for short pit stops didn’t alter the fine win for newcomers Richard Woods and Mark Wakefield’s Ford Focus, but did demote the Roland Hopkins/Matthew Sleigh VW Golf to third, behind lone driver Rob Baker’s Smart 4/2.