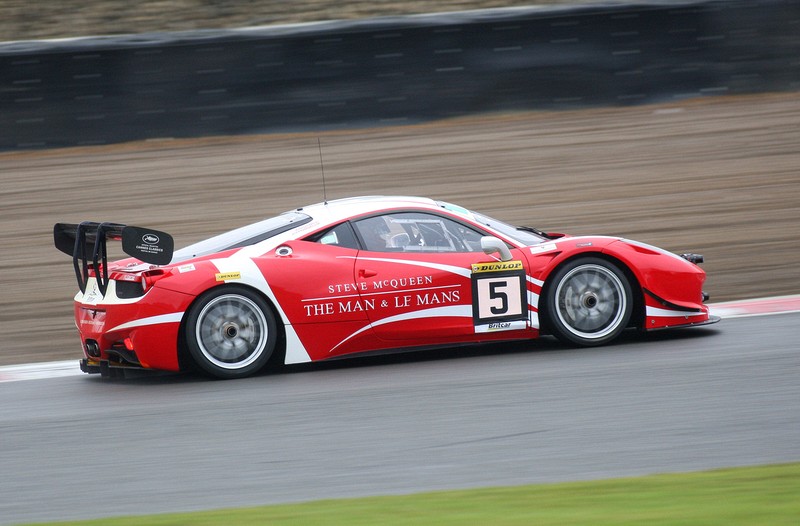 Exceptional circumstances on a rainy evening prevailed here, with Bonamy Grimes and Jonny Mowlem taking the FF Corse Ferrari 458 Challenge to another overall win in the 50-minute race, while series returnees Tom Howard and Adam Hayes were surprise winners of the Sprint category in the Moss Motorsport BMW M3.

This turned out to be a race of two halves, of which only the latter portion would be of any significance, and there were no surprises as the red lights went out for the first time, with Rob Wheldon’s pole-sitting Radical RX, Calum Lockie’s Ferrari 458, Javier Morcillo’s Mosler, and Bon Grimes, headed off into the rainy night, while Witt Gamski tamed the beast of a 458 GTE on cold tyres amongst the squabbling Ginettas. It stayed much like this until the first Safety Car period – the crowded track and tricky conditions saw Adam Hayes’ BMW off-track after contact. It was too early for mandatory pit stops, though, and Witt Gamski, traditionally the first to stop in 50-minute races, had to wait until the field went green again to make his mandatory stop, handing the 458 GTE over to Ross Wylie. The green period was short-lived, though – just one further lap and the Safety Car was deployed again, and this time, half the field dived for the pits.

Always popular with the drivers, the 2017 season-ender proved no exception – despite the weather

Tom Barley had executed a textbook move at Paddock, going down the inside of two slower cars, but got tagged, sending his Ginetta G55 into the tyre wall at 100mph, necessitating a heavy lift, which would be unsafe under a full-course caution, so the red flags were thrown. Unfortunately, the timing screens were wiped too, and with many cars taking their mandatory stops at that point, and some on track in random positions, the decision was taken to maximise the race duration before the circuit curfew and restart the crocodile behind the Safety Car. With the first part of the race discarded, it was a New Dawn on Wet Night, and a 25-minute dash to the flag from an atypical starting point for many runners.

So, Jonny Mowlem made the best of the situation and went on to the win, just five seconds ahead of a charging Ross Wylie, with a surprise third place for Kevin Clarke in the Moss Motorsport BMW 1M, heading the Class 3 contingent. A surprise overall podium, but not the Class win – Kevin Clarke’s inspirational presence saw The Moss Motorsport team leap into contention – Tom Howard took the M3 to the Sprint category victory even after the car was punted off in Adam Haye’s stint – throwing a challenge to Endurance title contenders Darron Lewis and Tommy Knight, who were class runners-up in their Ginetta G55.

The Radical Coupe, a potential race winner, could manage only fourth place in the revised race format, and losing-out big time were the Morcillo/Cintrano Mosler, and potential Sprint winners Mason and Lockie, who both pitted as per their strategy, and lost out big time as a consequence, finishing 19th and 22nd respectively.

The Sprint title remained open after this race, and would go down to the wire. The Track Focused Porsche Cayman of Brad Nevinson and Sean Cooper maintained the slender lead over the Hopkins/Boyce VW Golf, which had completed the race on limited set-up data, having been heftily repaired after body and suspension damage incurred in free practice.