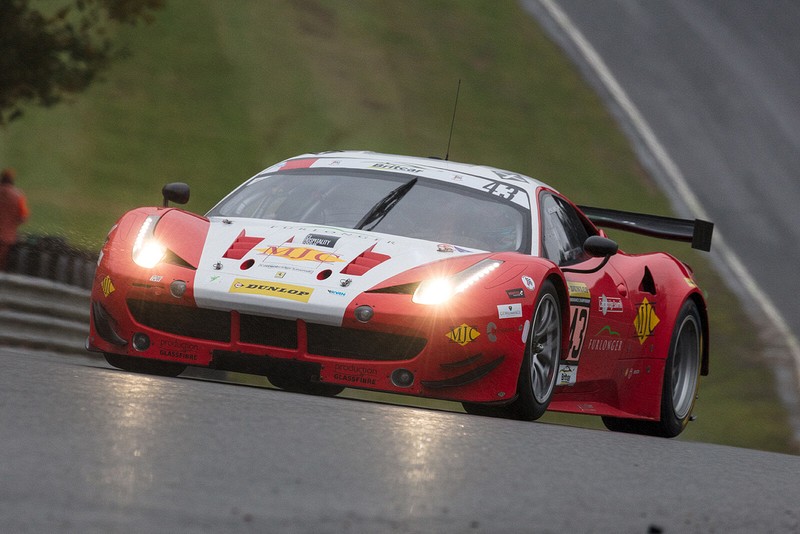 After threatening for several races, the RAW Motorsport Radical RXC of Rob Wheldon and Stefano Leaney finally tasted victory in the crisp Kentish darkness, while David Mason and Calum Lockie ended the season on a high, taking the Sprint category win in the FF Corse Ferrari 458 GTE. A mixture of good judgement, and the misfortune of others, helped Witt Gamski and Ross Wylie to the coveted overall Britcar Endrance title, while canny driving by Brad Nevinson and Sean Cooper led to Track Focused Porsche Cayman to bag the Sprint Championship honours.

With the grid for the two-hour Grand Finale set by the result of Saturday’s race, it was a topsy-turvy line up that approached the red lights in the gathering gloom of a Sunday afternoon, and Mike Moss made the most of his second-row grid slot, thrusting the BMW 1M down the inside through Paddock, and hanging onto the tail of leader Bon Grimes’s Ferrari. "I was able to warm my tyres better than the GT cars" said Moss later, and this was true, since Stefano Leaney’s Radical had no answer for the flying BMW early on, and we saw Tom Howard’s M3, Tommy Knight’s title-chasing Ginetta, and Olly Taylor, in Stewart Lines’ SEAT Cupra as front-runners, whilst Witt Gamski, knowing what he had to do in his title aspirations, dropped back midfield. Carving through from the back, though, were men on a mission – Calum Lockie and Javier Morcillo, starting way back in the order, were making short work of the saloons. Sadly not making the start at all was the Ginetta G55 of Callum Hawkins-Row, coming to a halt at the bottom of Paddock and going no further.

Clint Bardwell took and early pit stop in the Geoff Steel-run BMW M3 GTR, a trip over the kerbs having damaged a power steering hose, and was on his way again once repaired, though a good deal of laps down. The Class 1 order was restored at the front by about 15 minutes in, Morcillo’s Mosler dicing nose to tail and side-by-side with Leaney’s Radical for a number of laps before seizing an opportunity and establishing a lead that would stretch to the best part of a lap before the mandatory stops started to be taken. Gamski was now getting hold of the 458 GTE, the fuel tank emptying and the Dunlops kicking-in, and now moving back up the order, as was Jayde Kruger’s Ginetta, on the tail of sprint runner Tom Howard’s M3. As expected, Witt Gamski was the first to pit, right on the cusp of the window, leaving Ross Wylie to do what he does best.

The Sprint contenders were called off 50 minutes in, and David Mason had held on to the lead handed to him by Calum Lockie, the FF Corse Ferrari 458 GTE claiming the win by 25 seconds over the Tockwith Ginetta G50 of Ed Moore and Marmaduke Hall, who bagged the Class 4 win, a great effort after the team had worked tirelessly to fix the car following it incurring considerable rear-end damage in the Saturday race, with a great performance in third from team mates Lucas Nannetti and the rarely-tapped talent of Jacob Jackson in a similar car. Team Hard had taken the unusual step of running a NGTC Toyota Avensis in a night race, and series newcomers Ben Wallace and Jesse Chamberlain completed the Class 4 podium, with returnees Team Synchro taking Class 5 honours, the Honda Civic of Alyn James and Martin Byford – they had been nimbly up with the GT cars early on – finishing nine laps ahead of the Smart 4/4 of Sarah Moore and Rob Baker, which endured gear shift issues, and the title-contending VW Golf of Roland Hopkins and Matt Boyce. The Overall Sprint title went to the Track Focused Porsche Cayman of Class 3 winners Brad Nevinson and Sean Cooper, who have been assisted through the season by Rick Nevinson and Marcus Clutton; they just did it, beating Hopkins/Sleigh to the title by just two points. Marcus Fothergill and Dave Benett, old hands at Britcar, shared the Class 3 podium after another understated run in the Tockwith-maintained Bespoke Racing Porsche 997, and still running but not classified by the timekeepers were the previously front-running Tom Howard/Adam Hayes BMW M3, and lone driver Sam de Haan in the Barwell-run Audi R3, Neil Garnham’s garishly-decorated Ferrari 458 sadly failed to make the finish.

Back in the Endurance race, it was coming up to the halfway mark, and the pit window, was fully open. Tommy Knight had already handed over the #285 Ginetta to Darron Lewis, and fellow Class 3 contender Mike Moss responded by taking an early stop too, with the vastly experienced Kevin Clarke taking over the formerly front-running BMW 1M. Javier Morcillo, though, stayed out and barely nudged through a slightly ajar pit window, pitting from a comfortable lead which allowed Manuel Cintrano to bring the Mosler out still at the front, half a minute to the good of Rob Wheldon, who was now installed in the Radical, and who in turn had several laps over Jonny Mowlem’s Ferrari, and a rapidly recovering Ross Wylie. Mowlem responded to the threat, but there was no way the Challenge-spec 458 could stave off a hard-driven GTE machine, and with 40 minutes left, Wylie was through, and on pursuit of second place, which was now held by Cintrano, as Wheldon had sliced the gap and passed the Mosler.

There was drama as Darron Lewis, who had by now claimed the Class 3 lead from the BMW 1M being nursed by Kevin Clarke, was pitbound with body damage and a puncture, having clashed in the darkness out on the circuit. A new wheel and tyre wasn’t the answer though, and the car was back in straight away, undriveable due to suspension damage: the burly Brummie carried on, but stopped out on the circuit, trashing the title hopes of the likeable Knight/Lewis pairing. Drama for Ross Wylie too, upsetting the officials with a short pit stop and incurring a stop/go penalty, added to which a misfire, which was sorted by the Furlonger engineers with a few taps on a laptop.

A splash and dash for Mowlem’s Ferrari didn’t alter the standings, but what was in contention, as the clock ticked down, was the Class 3 lead. The Black Mamba Ginetta G55 of Andy Demetriou had got ahead of the pack, but had a tenuous lead over Kevin Clarke’s BMW 1M, and the remaining Team Hard Ginetta of Simon Rudd. It all went down to the last lap – Rudd had passed Clarke, and three cars were nose to tail up to Druids and down through Graham Hill. Rudd lost out in the melee through the last set of curves, and finished the race sidelined, still having done enough to retain third place.

So, 142 laps in, Wheldon took the flag in the RAW Motorsport Radical Coupe, the first Britcar win, and this time without a second fuel stop. "We mapped it on a ‘wet’ setting due to the conditions" said a relieved Rob Wheldon. Ross Wylie brought the MJC-Furlonger Ferrari home second, and had done enough to claim the overall Britcar Endurance title for himself and Witt Gamski, a great feat for the dormer champion who has once again selected a hotshoe co-driver, in a formidable machine, backed up by a small but expert team and their "vaaan". The Morcillo/Cintrano Mosler was third, Javier celebrating 25 continuous years of race driving, and his early-race performance earning him Sunoco Driver of the Day.

Bon Grimes and Jonny Mowlem finished the season with another Class 2 win in the FF Corse Ferrari 458 Challenge, seven laps ahead of the nearest class contender, the Invitation entry Porsche 911 of Mike Sellar and Jake Rattenbury, and, behind the squabbling Class 3 leading trio, the peripatetic professional Matty George assisted Chris Murphy to fourth place in the Whitebridge Aston Martin Vantage, with the stunning purple McLaren GT4 of Matt LeBretton and Rob Young, the Newbridge Porsche Cayman of Steve Tomkins and novice Gleb Stepanov, and the whistling EDF Aston Martin (you knew when that was coming down the straight!) of Mal Sandford and Ben Seyfried filling the next class places.

Stewart Lines’ SEAT Cupra, started by Olly Taylor, came home to win Class 4, though BTCC star Lines thought the 50-minute Sprint format might suit the car better, while the never-say-die attitude of the Geoff Steel team allowed Sam Alpass to claim a class podium for the BMW M3 GTR started by Clint Bardwell, after losing a heap of laps in the pits.

What a season, what a finale! In the competitive Class 1 and Class 3 there was never a clear race winner all season – the MJC-Furlonger Ferrari was consistently good, but others dipped in and out to queer the pitch through the year, and the squabbling Team Hard Ginettas gave no favours to each other on the track. It just gets better and better and better.