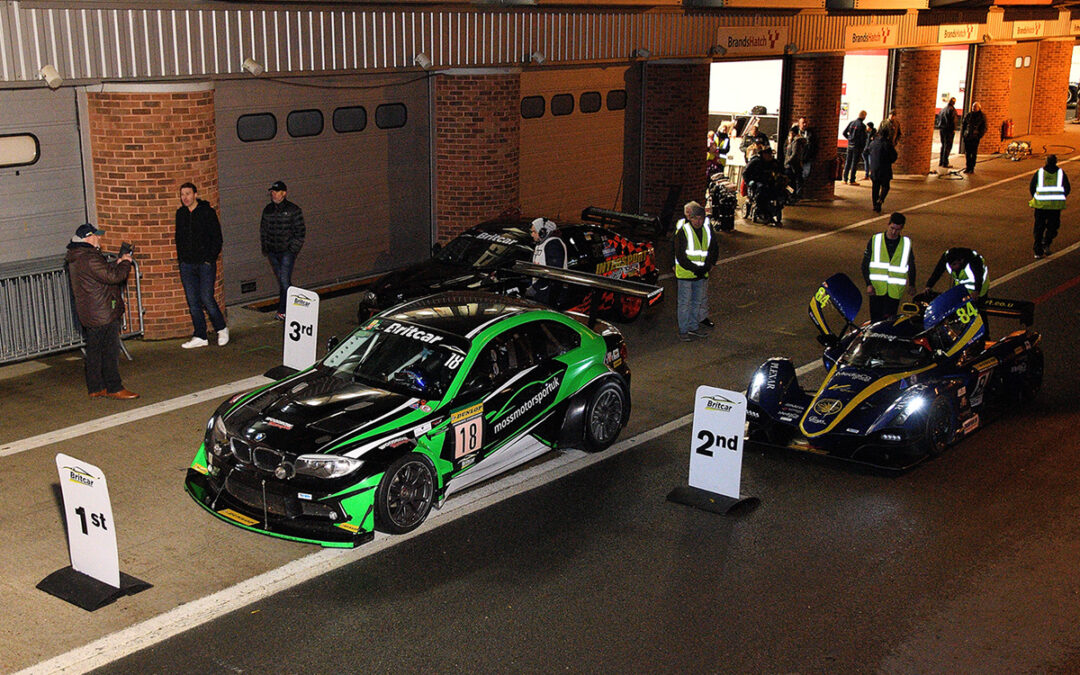 It’s been a while coming, and the last few rounds had seen all-round improvements, so at long last Mike Moss’s dream of piloting a "Ferrari beater" was realised. He and Ollie Jackson consolidated their earlier podium finish with a fine win in the car created with a high level of sophistication and engineering finesse by Ed Platt and Ash Bird of Woodrow Motorsport.

Realistically, it could have been a very different outcome if the Race 1-winning Brabham BT62 had gone the distance, and maybe if Tim Gray’s Praga hadn’t been caught first in the queue behind a late-race Safety Car.

This would be a two-hour race, the only one on the Britcar calendar, and would throw new challenges to the teams.

Will Powell took the Brabham into the lead from pole at the rolling start, and in the first lap melee into Druids, Alan Purbrick’s Saker took a heavy hit from behind from a TCR car, leaving him stranded across the track, the rear end damaged and the wing dislodged and laying on the track. The Safety Car was deployed immediately, the Saker being recovered to the pits and the ALP Racing team worked furiously on the pit apron to attempt to fix, but the damage was too extensive, and the task abandoned.
Also in the pits was the erstwhile leading Brabham, with an alternator problem, and once the Safety Car came in, nine laps into the race, Lucky Khera’s Ferrari 488 led, followed by Mike Moss in the BMW 1M, Tim Gray, Mike Epps, sensationally up from the rear of the grid in the Team Hard Ginetta G55, and title aspirant Paul Bailey’s 488.
Will Powell rejoined in the Brabham, but it wasn’t long before he was back in again, this time for good, the Brabham Automotive squad deciding to analyse data and determine the root cause.

Kevin Clarke had made a storming start, then dropped back into the midfield before mounting a recovery; first on his list was Peter Bassill’s sixth-placed Ginetta, then Paul Bailey’s Ferrari for fifth. Meanwhile, Tim Gray was also on the move in the VR Motorsport Praga, having easily cut through the pack from the blunt end of the grid, he took Moss, then Khera for the lead, and began to sprint away. George Agyeton had finally made it onto the grid after a Saturday of shenanigans, and was up to eighth from stone last in his BMW M3, though his woes were not over – a pit stop for a gearbox issue, a drive through penalty, and an eventual smoky engine failure sealed a dismal weekend for the local man.

At the front, Gray had a 10-second lead over Khera, who couldn’t shake Mike Moss’s BMW off, then Epps, Clarke, and Pete Bassill, who had taken sixth place from Paul Bailey’s Ferrari, continuing with traction issues, so much that he pitted to investigate a possible puncture, which was found not to be, so he was on his way again. Gray had no problem stretching his lead in the Praga, it was nearly three-quarters of a lap by lap 51, and Khera still only had a few tenths of a second over Moss, so as soon as the 40% pit window opened, Khera was in to hand over to Lee Frost, Tyres and fuel were taken on. Fuel, so much fuel, an interminably long pit stop, which saw the pursuing BMW 1M come in, take fuel, and was away with Ollie Jackson installed while the Ferrari was still being dump-churned. "I think we overdid it with the fuel, being new car to us, we went cautious" said team boss Simon Green in hindsight. Indeed, six laps were lost. Pete Bassill pitted too, handing the Hedgehog Ginetta G55 to Emily Linscott. Not Paul Bailey though, normally the first of the stoppers. "55 minutes", he had revealed earlier, and, exactly as planned, he was in, maximising the combination of fuel, tyres, and driving time for Andy Schulz in the hour or so of the race ahead. That’s how you win championships.

Tim Gray pitted from the lead, leaving the amazing Michael Epps to assume the top spot for a few laps in the Team Hard Ginetta G55, before handing over to novice Ben Claydon, while Nick Halstead had atoned for the issues in Race 1, and hauled the Maximum Motorsport SEAT Cupra up to fifth before handing over to pro-driver Jamie Stanley.
Not good news for the other Team Hard Ginetta though; Steven Chandler, having taken over after a solid stint by Nick Scott-Dickeson, had stopped at Surtees with driveshaft failure, and needed recovery. The Safety Car was deployed again, and there are no prizes to guess who it picked up at the front of the queue. Another lap lost for the SB Race Engineering Ferrari 488.

The caution was lifted with just over three quarters of an hour left, and Hancock’s BMW had a one-lap lead over Claydon’s Ginetta, though the novice would have no answer to Gray’s Praga, which was coming up fast from behind. The Praga was soon in touch with the leading BMW too, though a lap adrift, and there was a display of skill and close racing as the pair circulated together for several laps, Gray impatient to unlap himself, and Hancock having none of it.

Another Safety Car – this time for Ben Claydon, who had beached the #37 Ginetta at Paddock. This time the course car picked up Gray’s Praga, numbing his chances to unlap from the BMW. Lee Frost took advantage of the caution to pit the Ferrari 488 – another 25 litres of fuel were added, and Lucky Khera jumped in for a final stint.
The caution was lifted, and almost immediately Hancock was awarded a drive-through penalty for an infringement. The BMW retained the lead, but the Praga was now on the same lap, and Gray was on a charge, setting the fastest lap of the race in the process.

Jamie Stanley held fifth, but a pair of Ferraris were moving towards his SEAT. Lucky Khera took the position as they crossed the line, but Stanley, normally a Ferrari driver himself, was not impressed, and laid some manners on Khera, getting the place back as they rounded Paddock, though the Ferrari’s superior power took it ahead up the hill towards Druids, then Andy Schulz took the SEAT on the penultimate lap.

So, an emotional win for Mike Moss and Ollie Hancock, the Moss Motorsport team’s first win in the "big league" after major successes in previous Britcar Production championships. Tim Gray’s Praga finished 36 seconds adrift at the flag – if he wasn’t stymied by that late Safety Car, we may have had a lead battle down to the wire. Sensationally third was lone driver Kevin Clarke – he’d always been there or thereabouts throughout the race in his self-run BMW M3, and his performance earned him the Britcar Driver of the Day award. "I’ve done lots of two-hour stints in my lifetime, but that was a two-hour sprint" he joked.

Fourth overall, and taking the Class 3 win for the second time in the weekend, were Pete Bassill and Emily Linscott, in the Hedgehog / Century Ginetta G55, a terrific job in their first two-hour race. Bassill was particularly impressive in his opening stint, and Emily displays a maturity beyond her tender years in terms of skill and approach.

The two Ferraris in the race finished fifth and sixth, Khera’s possibly over-fuelled, and Schulz stroking his home to take the overall Championship title for himself and Paul Bailey.

There were no team orders at Maximum Motorsport – the Halstead/Stanley SEAT took maximum Class 4 points, despite stablemate Tim Docker needing to maximise his score to keep his title hopes, alive, though in reality, he was aware that a dropped score would take that out of reach.