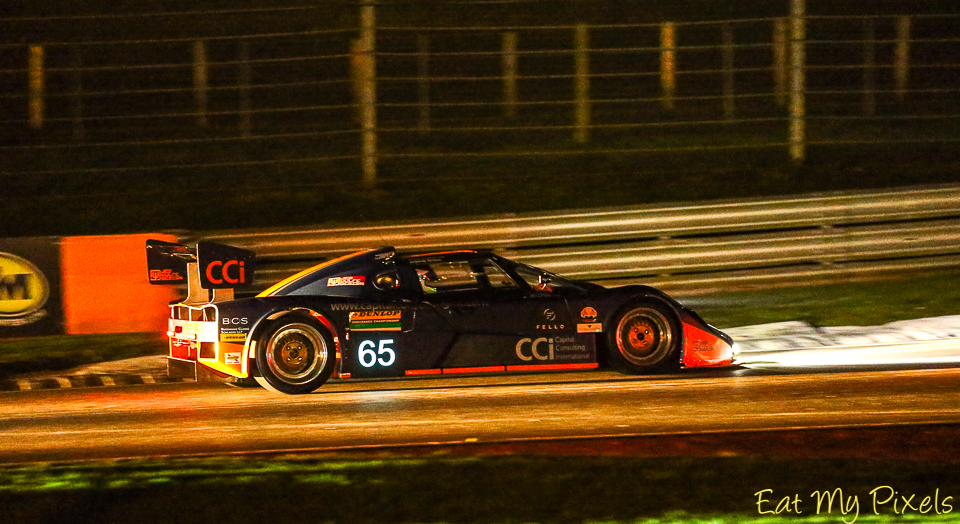 A Britcar night race is always a thriller, and Saturday evening’s 50-minute sprint race encounter was no disappointment. Alan Purbrick and David Brise took a well-deserved win in the ALP Racing Saker RAPX.

It was close though, very close; relative novice Purbrick had been closing on David Mason’s leading Ferrari 458 to the tune of two seconds a lap as the clock ticked down to the 50-minutes, and in what he thought was a last-gasp attempt crossed the line just milli-seconds ahead of the Ferrari. But there was still one lap to go, and Mason stayed in touch, the two cars crossing the line less than a second apart as the flag fell. Mason had mounted a serious and impressive response to the Saker’s threat, as his is wont in these situations, but likewise Purbrick was determined to grasp victory.

These two formidable performances were only half the story though; the pro-drivers in each car – Ross Wylie in the Ferrari and David Brise in the Saker – had taken the opening stints, and Wylie was off like a robber’s dog as the lights went out at the rolling start, and by lap 30 had put a lap over the second-placed Class 2 Saker. The smart money was on a three-lap buffer to enable Mason to take the victory, and while those three laps were shown as the difference during the pit-stop period, it all evened-out into a one-lap deficit to chase as the second stinters settled. Purbrick’s efforts earned him the Britcar Driver of the Day award.

Finishing just three seconds adrift of the leading duo was the Ginetta G55 Superprix of Lucky Khera and Declan Jones, and a betting man, knowing Jones to be the slightly faster of the two Ginetta Supercup regulars, would have laid odds on them taking the win, but despite Jones’ meteoric comeback from the mandatory pitstop – only Wylie’s Ferrari posted a faster lap during the race – it wasn’t to be, though one lap more may have sealed it.

Behind the trio that graced to overall podium, there were tales of joy and disappointment. A bit of rubbing on the opening lap, combined with some errant debris from the carnage in the Ginetta Juniors previous race, saw three cars pit to sort punctures almost immediately the race started, leaving Kevin Clarke’s BMW M3, Nick Scott-Dickeson’s Ginetta G55 and Sarah Moore’s title-chasing Ginetta G50 out of contention for the rest of the race despite the best efforts of second-stinters Ryan Lindsay, Ryan Harper-Ellam and Matt Greenwood, though the G55 duo did bag the third-in -class trophy for their Class 3 efforts, and the Moore/Greenwood partnership had done enough to claim the overall title. Worse though, was the smoke coming from Kristian Prosser’s BMW M3, a sheared gear tooth having shattered the gearbox casing, forcing an early retirement and a threat to Prosser and Jon Watt’s Sprint title aspirations. 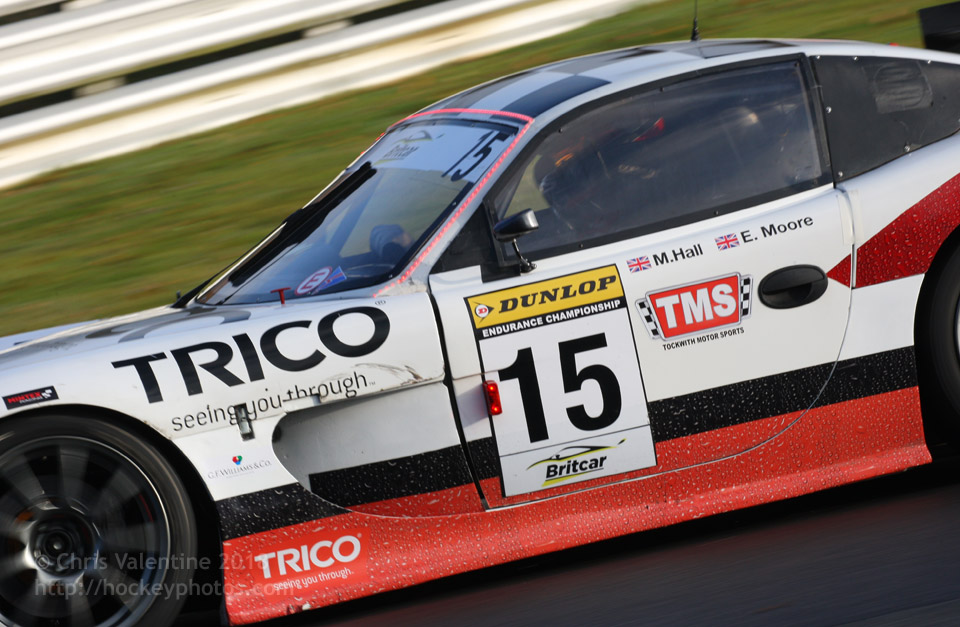 It wasn’t all bad news though – at last teenage duo Ed Moore and Marmaduke Hall got the result they deserved, their Ginetta G50 running at the sharp end of the race thoughout, and claiming fourth overall and the Class 4 victory, ahead of the whole Class 3 contingent. And that Class 3 contingent was headed by the Team Hard Ginetta G55 of Tom Barley and Simon Rudd, with second-stinter Rudd in danger of "doing an Ocon" as he, faster than the leaders in the final laps, embroiled himself in the intense lead battle as he unlapped himself to pursue the G50 ahead, while second in class was the stunning purple Marc Cars McLaren GT4 of Neil Garnham and Rob Young.

Returnee Stewart Lines, partnered by Tom Walker in the Maximum Motorsport SEAT Cupra, headed a large mixed group of Sprint, Endurance and Invitational Class 4 runners, including lone driver Sam Alpass, who had his BMW M3 up to second overall during the mid-race period, and Chris Bentley/John Clonis improved their championship aspirations by claiming the points-paying Class 4 Sprint win in their SEAT Leon, though Tim Docker’s VW Golf got the fastest lap as he chased to finish just 0.657 seconds behind Clonis at the flag.

It was good to see former BTCC ace and current 24-hour specialist James Kaye in the Audi R53 – commuting from the Isle of Wight, he partnered Matt Le Breton to 11th place overall, ahead of fellow 24-hr regulars Dave Cox and Guy Povey’s BMW M3, while in Class 5, Alyn James, back in the old-model Honda Civic of Synchro Motorsport, was the first Class 5 runner home, with Andy Napier’s Lotus Elise and the Rob Baker/Lucas Nanetti Smart 4/4 taking the first and second place points.

Martin Byford had been impressive in the BPM Racing SEAT Cupra in his opening stint, but an errant fire extinguisher issue put paid to Ashley Woodman’s chance to race, and series debutante Michael Crees had gone well in the Team Hard BTCC Toyota Avensis, which sadly expired with mechanical issues during Sam Randon’s stint. Gearbox input shaft failure put paid to Mike Moss’s progress, denying Chris Murphy his first race in the Moss Motorsport BMW 1M, while what could have been a Local Hero story for the #42 BMW M3 – George Agyeton and Dave Coyne driving, with Dave Bartrum also around – turned sour after disqualification for a pit-stop infringement.

While Matt Greenwood and Sarah Moore had now clinched the overall Endurance title, the Sprint trophy, and some of the class titles, were still to play for, and with some fixing to be done before Sunday evening’s finale.