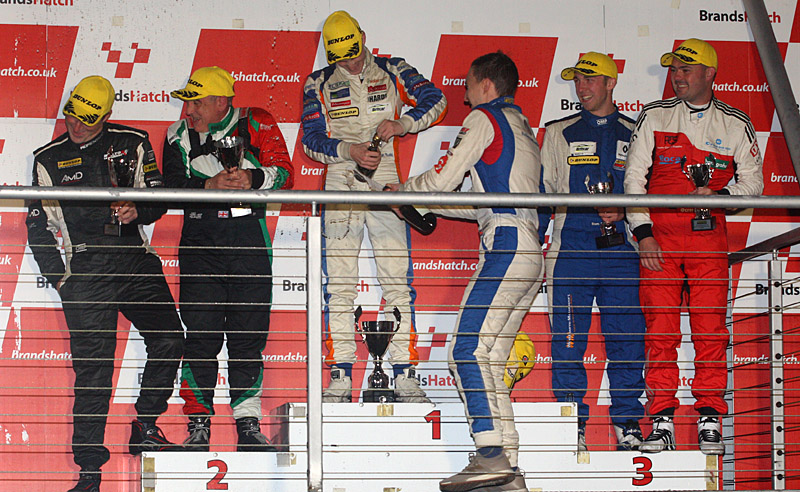 This was a race that, for the Sprint contingent, the Safety Car played a part in the result. The drama started before the race did, with the Team Hard Toyota Avensis visiting the Clearways gravel on the formation lap, and starting the race from the pit lane, while up front it was slightly different story, with Ross Wylie having to fight for the lead with David Brise’s pole-sitting Saker. Side-by-side or nose-to-tail, it wasn’t until going down the hill from Druids on the opening lap that the Ferrari made it stick, and then the pace of the race was slightly faster that the previous evening – Wylie had a put a lap over the whole field by lap 25 this time, five laps earlier than on Saturday evening. Lucky Khera’s Ginetta G55 ran third once again, with a brace of further Ginettas behind – the impressive Marma Hall in the G50, and Tom Barley in the Team Hard G55. Making progress from low down on the grid in the early stages were Martin Byford’s SEAT, Kris Prosser’s BMW, Ryan Lindsay’s BMW, and, after that pre-race off, Sam Randon’s Toyota.

Audacious teenager Marma Hall had been running very close to Lucky Khera’s higher-specced Ginetta – they swapped places a number of times, Marma got past yet again and kept 3rd with Ginetta Supercup driver Lucky pitting soon after, a good few laps after which Marma then pitted under the safety car whilst still holding 3rd overall.

The first pit-stops for the Sprint runners had just started when Rob Baker’s Smart slowed along the Brabham Straight and came to a halt on the grass by the pit exit. The Safety Car was deployed to effect a safe recovery, which prompted all the Sprint runners to make their pit call. Included in this group was Endurance contender Marma Hall, though this wasn’t scheduled, and the G50 was pushed into the garage in a mist of smoke and extinguisher spray. There will be winners and losers in a Safety Car situation, particularly on a short lap like Brands Hatch, and the FF Corse team got it right, Mason taking over the Ferrari from Wylie and rejoining in the Sprint lead, and once the Safety Car had done its job, continued amongst the squabbling Endurance racers (which caused him to take to the gravel in avoidance on several occasions) to finish a comfortable 21 seconds ahead of Alan Purbrick’s Saker, and Lucky Khera, who was not so lucky this time – the Safety Car didn’t fall right for him, and co-driver Declan Jones took the Ginetta G55 to third once again, though a lap down on the leaders after the 50 minutes had expired. 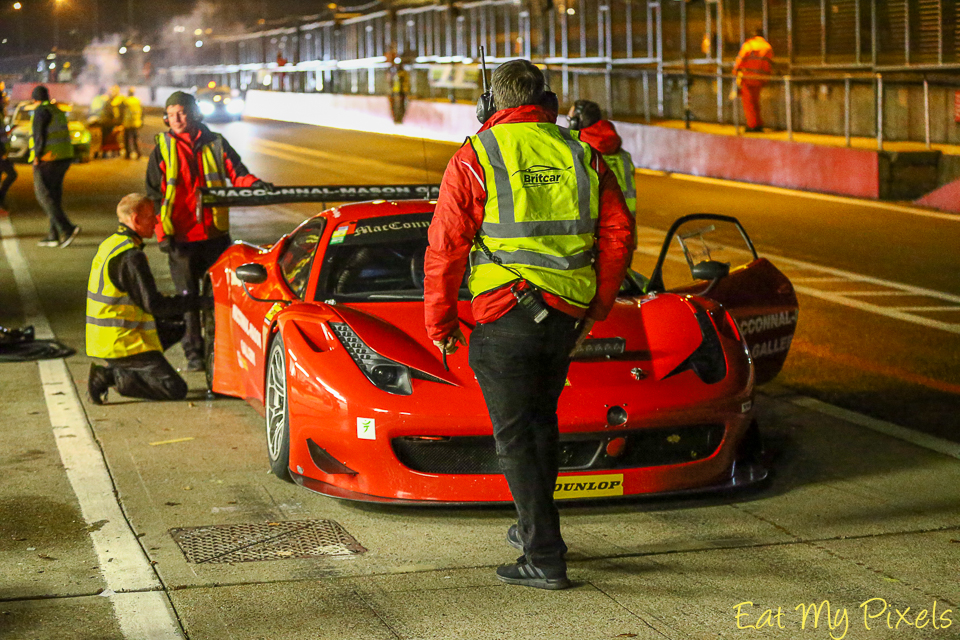 Kristian Prosser had soon risen to the top of Class 4 in the Moss Motorsport BMW M3, and Jon Watt consolidated that position to keep the pair’s title dreams alive, though he threw away the class race victory with a spin on the penultimate lap of the race – "I did my celebratory doughnut a lap too early" he joked later – handing the win to the SEAT of Chris Bentley and John Clonis, making it a double win for the duo, followed by lone driver Tim Docker’s VW Golf. Third place for Prosser/Watt was good enough for them to clinch the overall Sprint title though, ahead of classmates Bentley/Clonis, who started the season in casual "see how we get on" mode and finished as serious title contenders. Chris Murphy got his drive in the Moss Motorsport BMW 1M this time, handing over to Mike Moss, who took it to seventh overall and the Class 2 win, and with the demise of the Rob Baker / Lucas Nanetti Smart, Andy Napier tooled round in his Lotus Elise to take the Class 5 race victory, and the class title too.

There was still the Endurance race running, and during the Sprint runners’ pit stops, this contingent had assumed the leading positions in the race, Ryan Lindsay’s Intersport BMW in the lead, just a whisker ahead of Tom Barley’s Ginetta G55, and Martin Byford in the BPM Racing SEAT. This came to an end rather swiftly when Lindsay avoided a spinner, only to hit another car that was unsighted in the darkness, damaging the radiator on the BMW and finishing a great run that could have resulted in a win. Barley stopped around now to hand the G55 to Simon Rudd, leaving Byford in the lead of the race; he stayed out late, later than late-stoppers Tom Walker (who had been running second, pitting for Stewart Lines), and Ryan Harper-Ellam (for Nick Scott-Dickeson). Ashley Woodman relieved Byford in the SEAT eventually, and almost immediately both Woodman and Lines were awarded drive-through penalties for pit stop infringements. 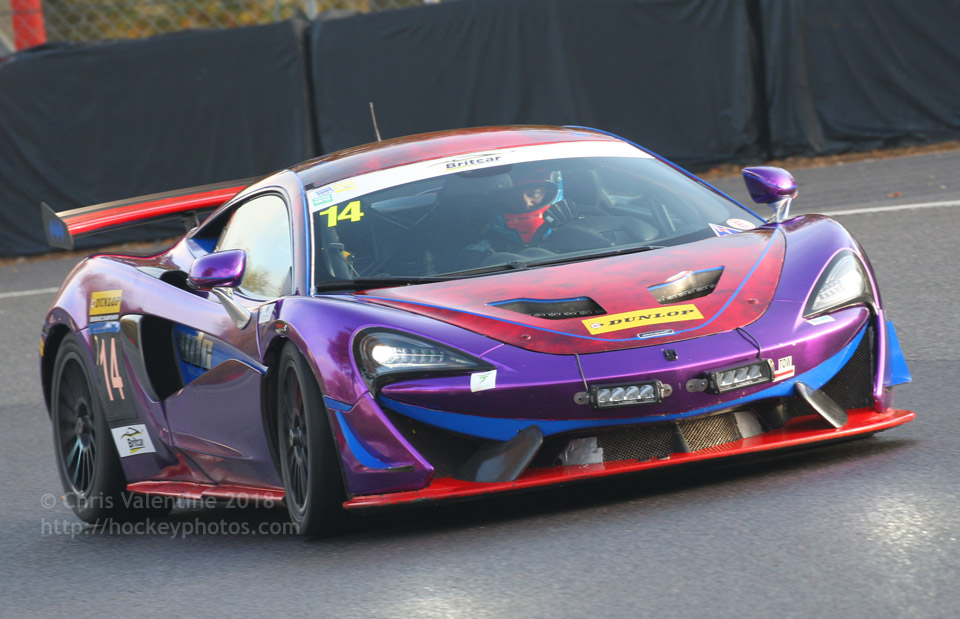 The MARC cars McLaren had already entertained Neil Garnham and Rob Young in the driver’s seat, and now had Mat Le Breton, who had taken the opening stint in the Audi now driven by James Kaye, taking his turn. Lone driver Alyn James, in the Class 5 Honda Civic, was audaciously mounting a pursuit, but Le Breton was able to respond, though he had no answer to his previous mount, which the marauding Kaye was bringing through the order.

BTCC aspirant Michael Crees was getting an early taste of 2019 in the Team Hard Toyota Avensis, and was in a creditable third place when the officials decided the rattling front splitter needed attention. The ensuing rapid pit stop barely remedied the issue, and Crees lost only one place, emerging on the tail of Scott-Dickeson’s Ginetta. The Toyota quickly dealt with the Ginetta, which then did a 180 degree spin at Druids, dropping it down the order.

No problems for Team Hard team mate Simon Rudd though, who took the flag after 132 laps, a full lap ahead of Ash Woodman, who had atoned for the issues in the previous race, and performed magnificently in the SEAT, his efforts earning him the Sunoco Driver of the Day award. Sam Randon has performed well in whatever car team Hard has placed him in this year, and sharing the Toyota Avensis with Michael Crees, third overall was no surprise, given the unknown quantity of a BTCC car in an endurance race. It all came good after a nervous start to the weekend for the MARC Cars team; the Kaye / Le Breton Audi, managed by former Britcar stalwart Tom Gannon, and the team’s stunning McLaren, crewed also by Le Breton in league with Neil Garnham and Rob Young, were fourth and fifth, ahead of lone driver Alyn James who had punched well above his weight in the Synchro Honda Civic, seizing sixth overall from George Haynes’ BMW M3 (with Michael Cox taking the opening stint) and finishing just over a second ahead at the flag. Nick Scott-Dickeson’s late spin dropped the #285 Ginetta to eighth at the finish, a lap ahead of the George Agyeton/Dave Coyne BMW M3, with Stewart Lines coming home tenth in a SEAT Cupra shared with Tom Walker that had been dogged by component failures all weekend – they could have been contenders. In a final show of brio and defiance, Tockwith got the #15 Ginetta G50 running again, and Ed Moore rejoined the race for a sponsor-pleasing five final laps.

So, Simon Rudd and Tom Barley become well-deserved GT4 Class 3 champions. It wasn’t an easy ride, they faced (and welcomed) fierce and respectful opposition from the McCollum/Cooper KTM X-Bow all season, and still raced as they normally would this weekend, despite the late withdrawal of the KTM for the final showdown due to McCollum’s appendicitis.

Conspicuous by their absence in this race were newly-crowned overall champions Sarah Moore and Matt Greenwood, who, with nothing to play for other than dropped score, decided discretion was the better part of valour.