Brands Indy Race 1: A Win for Bailey and Schulz in Difficult Circumstances 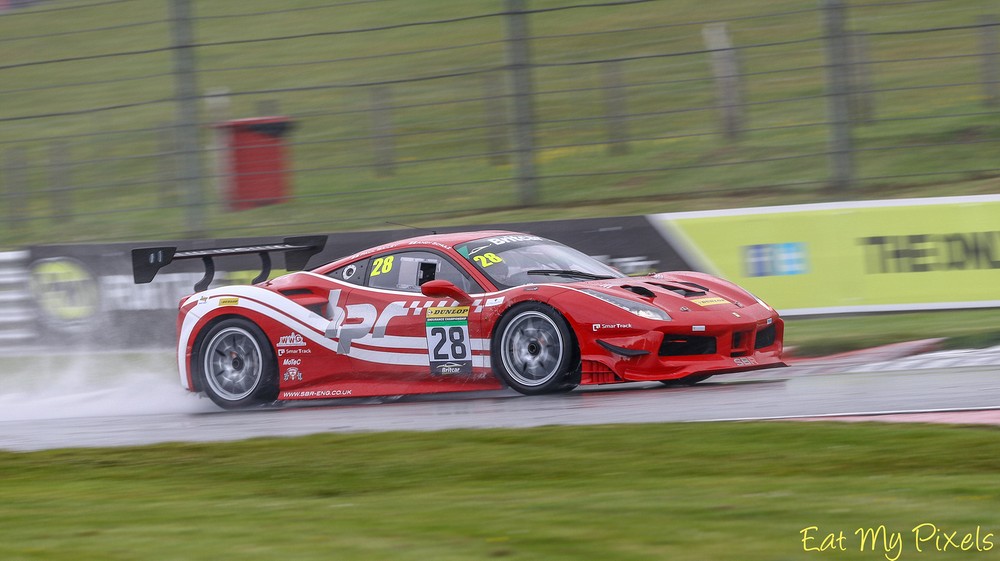 Paul Bailey and Andy Schulz, in the SB Race Engineering Ferrari 488 Challenge, took the win in Saturday lunchtime’s opening race of the day, victorious in a race blighted by attrition, Safety Cars, biblical rain and penalties.

It all started early in the race; Sarah Moore brought the Ginetta G50 in after five laps with a broken diff bracket. The reduced Tockwith crew (Nigel Moore was away on ELMS duty) got to work to fix it, and Moh Ritson rejoined just minutes from the flag to shake-down the repair.

And then it really kicked-off just four laps later – the brand new engine in Mike Moss’s BMW 1M let go at Paddock, causing Mark Cunningham’s Porsche, which had been harrying the Moss for sixth place, to spin violently on the fluid from the BMW’s engine, backwards into the gravel. "The spin was OK, it was the Ginettas coming towards me, out of control, at 100mph, that was the scary bit" said Cunningham later. Those Ginettas were the G55s of Lucky Khera and Steve Burgess, and the G50 of Graham Roberts, all beached in the gravel, while Tim Docker’s VW Golf and Sam Neary’s BMW M3 both had their own moments, but held it together and avoided the carnage. Not so lucky for Lucky, then, but a bit luckier for stablemate Lee Frost, who had missed the cut on the new gridding procedure, started at the rear of the field from the pitlane, and got to the scene of the accident when things were a little quieter, avoiding any drama.

The Safety Car was deployed immediately – too early for a mandatory pit-stop, but not for single drivers, so Tim Docker took advantage and got his out of the way.
Up to this point, Ross Wylie had led away from pole in the FF Corse Ferrari 488, but wasn’t exactly streaking away from David Brise’s Saker, while a fired-up Paul Rose had successfully taken third place from Al Boulton’s VR Motorsport Praga, and Paul Bailey’s 488 was holding firm behind. FF Corse, though, decided that a split-shift on the driver duties might reap benefits, putting David Mason into the leading Ferrari during what was going to be a prolonged Safety Car period, then pitting again for Wylie to resume later, but…

It began to rain. Just ordinary, annoying rain at first, then a real Old Testament Noah’s Ark downpour. Brise pitted from the lead for wets and handed the ALP Saker over to Alan Purbrick – "I’ll have to get out my calculator and see when I have to get back in again" he said, then a lap later, Mason was back in for wets in the 488, as were the majority of the field.

Some toughed it out on slicks, though, oblivious to the full course caution and the deteriorating conditions, hanging on for that two-driver pit window to open. Lee Frost, Sam Neary, Tim Docker, Chris Bentley’s SEAT, and leader Bailey all played the waiting game behind the Safety car until the last possible moment. Which came, ironically, just as the caution was lifted. All then pitted for wets, and for Bentley and Neary, to hand over to Rob Gilham and Richard Neary respectively. Purbrick pitted the ALP Saker once again, Brise having done the maths and decided he could legally take it to the flag.

Through all this, Paul Rose had taken the lead in the JPR Saker, ahead of a tentatively driven Ferrari of Mason and a similarly driven Praga of Goodwood legend Grant Williams, who had taken over from Boulton, though behind them was a fired-up Andy Schulz, who had relieved Bailey in the #28 Ferrari. Rose had already pitted twice, once for his early singleton mandatory stop, the again for a tyre change, and now he was penalised with a drive-through for a pit-lane infringement – this wouldn’t be the only time he’d get his wrist slapped by the men in serious trousers. This gave Schulz the lead, though Rose was soon back on it again, and within four laps was back in the lead, with just 20 minutes of the race left. Around this point it all went wrong for David Brise at Graham Hill Bend, the ALP Saker aquaplaning straight on to the wide grassy run-off; he thought he might be able to recover, but the rear bodywork had been dislodged during the journey, and he was dragging a severely damaged rear-end, so retired.
Ross Wylie got back into the Ferrari which David Mason had looked after during his mid-race stint, and once again the officials meted out punishment on Paul Rose, another drive through for a Safety Car infringement, but before he could take it, a close call with the recovering VR Motorsport Praga at Paddock saw the Czech-built car in the gravel. Rose continued, and took his penalty, but we now had a late Safety Car period to enable recovery of the Praga.

There were just two minutes of the race left after the final caution was lifted, just time for three laps, and Andy Schulz took the flag to mark the return of his and Paul Bailey’s winning ways in Britcar, with Paul Rose in the JPR Saker second, just a few seconds shy on the road, but having 30 seconds added to his time post-race for yet another infringement, now having taken more penalties that a drawn cup final, these two clinching the Class 2 and Class 1 wins respectively. Third overall, despite a late spin, was the Class 4 Team Abba BMW M3 of father-and-son duo Richard and Sam Neary, who finished ahead of classmates Ashley Woodman and Martin Byford in the EDF-run BPM Motorsport SEAT Cupra, with Byford’s "sideways" style being mightily impressive. FF Corse’s strategy earned fifth overall, and second in Class 2 for David Mason and Ross Wylie, whist Lee Frost was the lone classified Class 3 finisher in his Ginetta G55, ahead of the Team Brit Aston Martin of Warren McKinlay and Martyn Compton – these guys have seen more than a bit of rain in their military careers, and a trip to the Class 4 podium was a reward for their solid efforts. Piers Reid, too, held it together in his Butler Motorsport BMW M3, ahead of the Chris Bentley/Rob Gilham SEAT, and, atypically down the order after several pit stops, Tim Docker’s VW Golf. Gamely running at the end, but to far back to be classified, were Moh Ritson’s repaired Ginetta G50, and Peter Cunningham in the de-gravelled SG Racing Porsche.

Would the weather be kinder for Race 2?