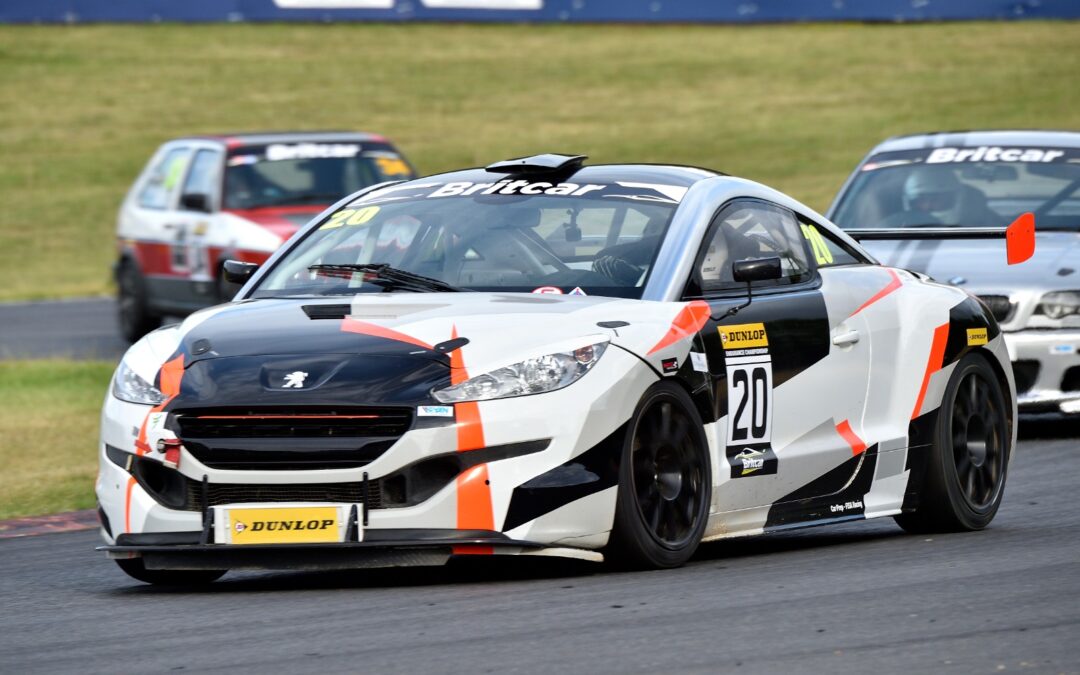 Charlie Campbell and Rob Smith, in the Peugeot RCZ, took the honours in a fraught second race, Smith having to fight through the pack in the final 10 minutes of the race, after Campbell started at the back of the grid following a DNF in Race 1.

It was a scruffy rolling start, the gap left by the absent Smart car leading to a little confusion, and Barry McMahon’s Alfa led the pack through Paddock, with Oliver Smith’s BMW behind, and again a fast-starting Adriano Medeiros, who’s Ginetta was challenging the BMW up the hill to Druids. The Brazilian driver coach was also gamely holding off the more powerful Mazda RX8 of Jonny MacGregor, but had to give way at Paddock three laps in. Richard Bernard was an early casualty, parking his Boxster safely on the infield out of Surtees.

A Clio trio – Ben Colburn, brother James, and Aaron Thompson – were now on the tail of Medeiros, but he was able to hold them off and even extend the gap, while in Class 7 Andrew Tucker’s BMW 116 was dicing with Steve Cook’s Honda Civic, though Alistair Lindsay was recovering from his back row grid slot, and was soon in the class lead in his Golf.

With McMahon pulling away at the front, Oliver Smith’s second place was coming under threat from Jonny MacGregor’s Mazda RX8, and a pass down the inside at Paddock was thwarted as the BMW got back up the hill and through Druids. For three laps, the Mazda tried down the inside at Paddock again, to no avail. When you have been watching racing for a while, you know – you just know – that situations like this are likely to end in tears. And so it was – assisted by traffic through that same corner, the Mazda, later on the brakes, was alongside the BMW, and there was side contact which resulted in spins, leaving the BMW on the edge of the gravel trap and the Mazda nose-in to the tyre wall, causing the Safety Car to be deployed.
Too early for the pit window to be opened, and those that thought it was were ushered on their way to stop again at the appropriate time. Minutes later, the window was opened, and the majority of cars took their stops. Once the field had settled after the stops, Barry McMahon maintained his lead, with now Brad Kaylor’s SEAT second, Charlotte Birch, who had taken over the Vinna Sport Ginetta from Medeiros, third, and Robert Pugsley’s Cayman fourth. Behind them, the Clio trio had switched around, with Steve Thompson, having his first race weekend for 13 years, ahead of Ben and James Colburn.

There now followed a short period of attrition, sadly to the front runners; Brad Kaylor’s SEAT suffered a catastrophic blow-up as it entered the pit lane, and Ben Colburn, in an attempt to wrest the Clio lead from Steve Thompson at Druids, damaged his radiator and pulled off by the ambulance gate at Paddock, then leader Barry McMahon parked his Alfa by the marshals post on the outside of Graham Hill, and finally Rob Austin’s Golf was at the rear entrance to the paddock. 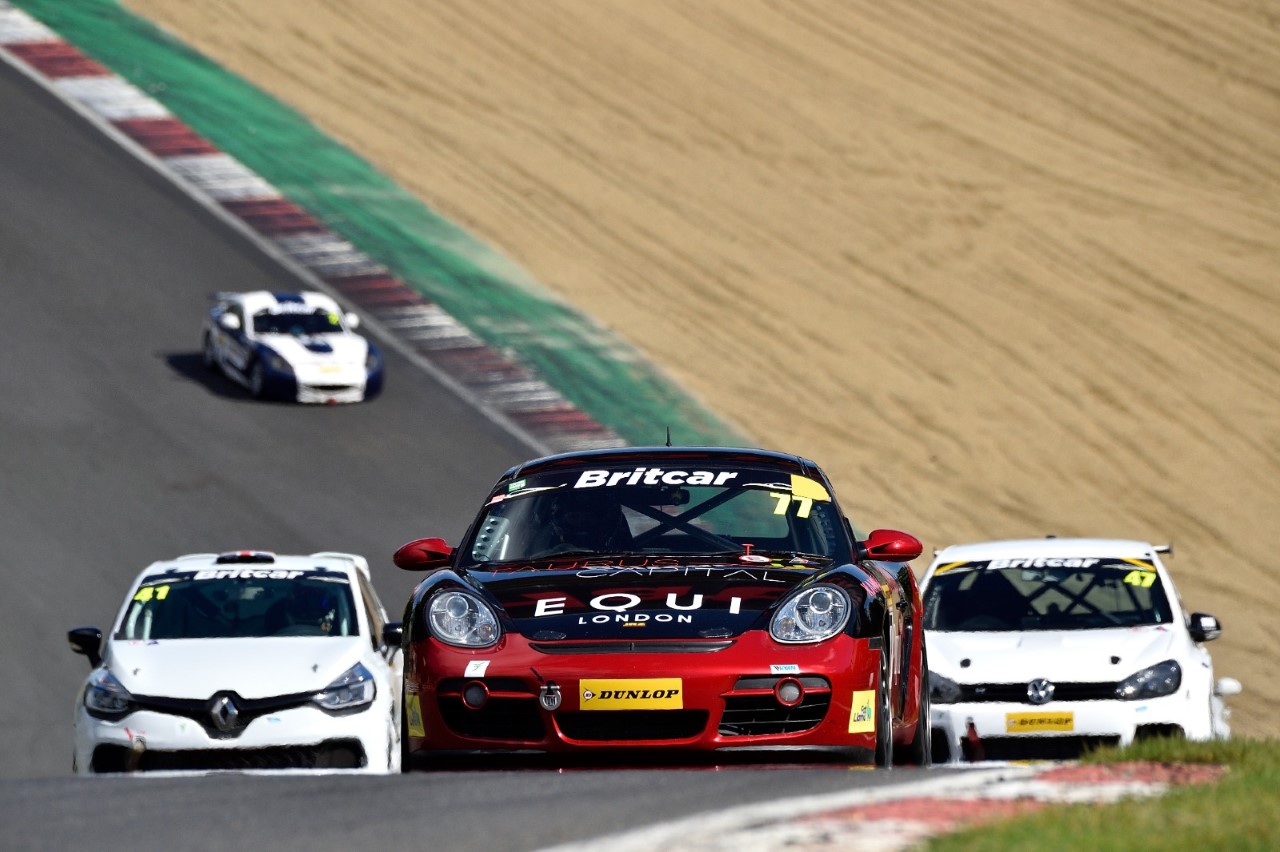 Another of our Britcar debutees, Robert Pugsley put in an excellent performance in the Porsche Cayman S

Time for another Safety Car, and once the caution was lifted, there was just 10 minutes left on the clock. Robert Pugsley’s Cayman held the lead, and just 1.5 seconds covered the top four – Pugsley, James Colburn, Steve Thompson, and Andrew Bentley’s Ginetta G40. Colburn tried once to take the lead, but Pugsley fought back, then next time around, the Clio made it stick.

Charles Campbell’s Peugeot RCZ has barely got a mention so far in this report, but now, with Rob Smith driving, and in fifth place, this was the car to watch, for no matter what the top four were doing – and Bentley was on the move, taking third from Thompson – it was clear that the Peugeot had the legs of those in front, and could take the lead in the time remaining. And he did; there were just two minutes to go when he passed James Colburn’s Clio, to take the flag nearly four seconds to the good. Robert Pugsley showed where he could finish without penalties, third overall, and fourth, heading the Class 6 runners, was the Ginetta of Peter Spano and Andrew Bentley, particularly impressive in those last 10 minutes. Steve Thompson, in the battle-scarred Clio started by son Aaron, was a popular Clio runner up – he had been magnificent, returning after a 13-year lay-off, and his robust defence of the class lead earned the former Eurocar racer and Legends world finalist the Driver of the Day award. Charlotte Birch was again impressive on her way to the second step of the Class 6 podium, aided in no small way by Adriano Medeiros’s opening stint, and local hero Anthony Hutchins was delighted to take the final Class 5 podium spot at his home track, having finished seventh overall in his Boxster. The "dad car" Clio of Richard Colburn and Peter Dorlin, was third in class, while Darren Geeraerts ran his own race to fourth.

Alistair Lindsay cut through from the back to seal the Class 7 win in his Golf, 22 seconds ahead of the promising partnership of Steve and Edward Cook in their Honda Civic, and it was another good result for Team BRIT – Matty Street and Andrew Tucker reinforced they partnership with another class podium, while lone-driver Luke Pound, and the Darren Cook / Charles Graham pairing were split in the results by Jonathan Barrett’s BMW 330.