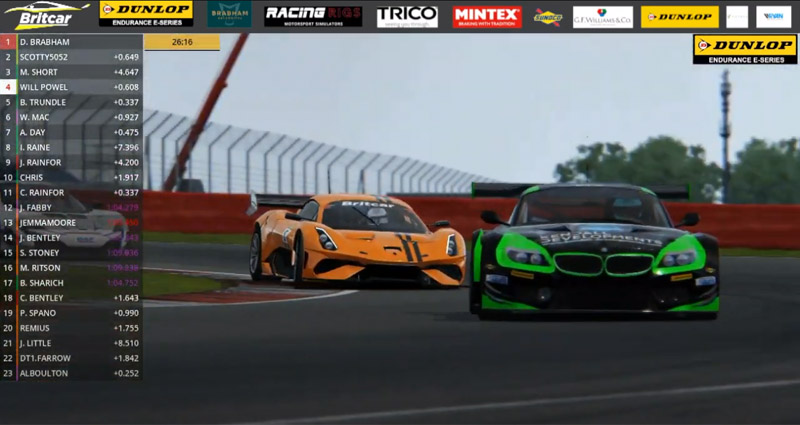 David Brabham
I had to work hard for the result, and I was pleased Bobby spun as I am sure he would have got me at the end as he was much faster.”

Will Powell
“Some great close racing this evening, even though qualifying and race 1 were a bit of a disaster! Got to hold my hands up and admit lack of practice and preparation compared with when we had more time during lockdown to work out a set up. My tyres were shot halfway through Race 1 so I took all the camber off for Race 2 and scored a podium which is as much as I could have hoped for this time out. Great battle with Morgan Short – what a cracking little sim racer he is looking forward to seeing him racing for real later this year – and of course my Brabham colleagues in a Race 2. Hopefully that three-way dice for the podium will be an entertaining watch on YouTube.”

Isaac Raine
“I was just so slow all night, and it wasn’t helped by my brake pedal more or less hanging on by a thread leading to my brakes being applied midway down a straight. With that in mind, I am happy with two sixth places in the races. It was a race of what could’ve been, although I don’t think I’d have been much further up the field in either race as the Pragas were rapid on the straights and I couldn’t keep up, and the BT62s were beasts yet again!”

Morgan Short
“Race one was going really well. I was running P3 and battling with Will, Bobby, Scott and Jack throughout the race, and holding my own even though the Z4 was the slowest of the Class One cars. Unfortunately some lag issues meant that I was spun from P3 towards the end of the race, meaning I finished fifth, which put a sour note on things. Race 2 started well, moving up to fourth at the start, and on the tail of the top three. However, more lag issues plagued my race, and I ended up being spun multiple times through glitches and lag, meaning I ended up finishing third.”