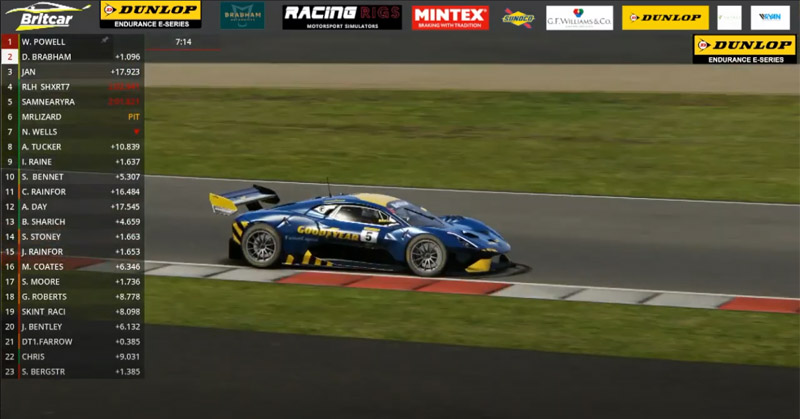 The Britcar eSeries returns to Silverstone, this time on the International configuration, and once again there are a four-car squad of Brabham BT62s. David Brabham heads the Brabham Automotive entries, and, racing from his Brazilian home, former F1 ace and winner of many Grands Prix, Rubens Barrichello. As is often in this series, Brabham have secured a name driver, and David Brabham is relishing the appearance of such an iconic pilot: "We very much look forward to the next Britcar Dunlop Endurance eSeries event at Silverstone, it should be another great event. My friend ex-Formula 1 Grand Prix winner Rubens Barrichello will joining me, and in the Motus One entry, Brabham Automotive’s Mechanical Design Engineer Scott Stephenson will race with Will Powell. It is a real honour to have Rubens join us in the Competition BT62, he is a great addition to the series. The Brabham BT62 has been heavily restricted by BOP, but the car should still be competitive to fight for the win"

Will Powell’s Motus One set-up fields the team boss – a winner last time out here at the team’s "home" circuit -and, after a disappointing no-show at Brands Hatch, is also looking forward to racing alongside a racing hero, and savouring a return to real -life racing: "After managing to have a DNS in a sim race when the brake pedal broke during qualifying in the last round, I’m looking forward to getting back in the action. Racing with a legend like Rubens is a real honour, even if it is virtually, and I’m grateful to David for bringing him into the fold. It’ll also be interesting to see if any rivalries carry over to the real world, now that we’re racing again in real life at Croft during the same week! "

Brands Hatch threw up a few surprises – Team BRITS’s Bobby Trundley cruised to a Race 1 win in the squad’s new McLaren, and Jack Fabby oh-so-nearly took Race 2 in VR Motorsport’s debuting Praga R1T, but for a glitch, and for Silverstone the VR squad is boosted by armed forces veteran Warren McKinley, who joins regular Al Boulton to form a three-car attack. This will keep usual coming-man Morgan Short, normally the most likely driver to keep the Brabhams honest in his Rollcentre BMW Z4, on his toes, and present a challenge for the MacG Racing duo of Isaac Raine and Ben Sharich in the stunning Glickenhaus machines.

Class 2 has seen domination, even from the back of the field, by Charles Rainford in the CCK Ginetta G55, usually being split from twin brother James (SEAT TCR) on the podium by the rapid Shane Stoney in his G55. There is fraught action all through the class, with the TRICO-backed Ginettas of the Moore sisters, Sarah and Jemma, the similar cars of David Farrow, Jake Little and Darren Cook racing nose-to-tail and side-by-side with Milwaukee-based Shields Bergstrom’s SEAT TCR.