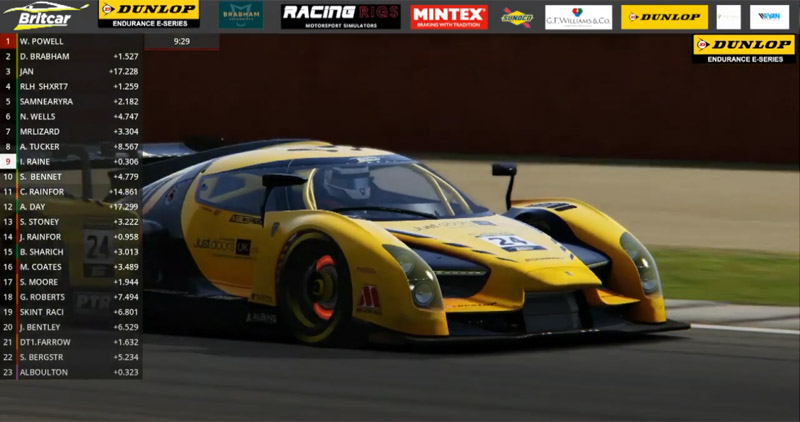 Will Powell did it again in Race 2 on the Silverstone GP circuit, where his Motus One organisation is based. In charge for most of the race, the Brabham BT62 pilot did face a late-race challenge from marque boss David Brabham’s BT62, but crossed the line nearly five seconds to the good after 30 minutes of racing. Powell had led away from pole-position, heading a Brabham 1-2-3, with Jan Magnussen holding second place until around third-distance, when the Dane slipped back, letting David Brabham, and Nathan Wells’ BMW Z4 through. He recovered though, spending the rest of the race as Brabham tail-gunner to the pack behind, though he was then caught up in the last-lap shenanigans that saw the final podium place in doubt until the flag. Brabham kept Powell honest throughout, never letting the lead gap exceed three seconds, but laid some manners on his team mate on the penultimate lap, nudging the nose of the blue BT62 ahead through Village, though Powell got the place back through Stowe, held it into Vale, and entered the last lap back in the lead, which, undeterred by squabbling traffic on that final tour, he held to the end. "It felt like a comfortable lead to manage until the tyres went and David was all over me. We had a fantastic battle over a couple of laps at the end and kept it clean this time. Really enjoyed the race" was Powell’s post-race synopsis.

There was the usual fraught action in the opening laps – a spin for Chris Clarke’s BMW at Copse, and a great start for Shaun Bennett’s Brabham, getting the jump on Morgan Short’s BMW and Sam Neary’s Mercedes, not bad for someone competing from Adelaide, where dawn was still just a rumour on the horizon. Short and Neary did get their positions back though, and Bennett then had Steve Burke’s Team Lizard BMW to contend with; they clashed going into the Loop, both going off, a move that would later earn Bennett a 30-second post-race penalty, and if that wasn’t enough, Bennett was himself collected by Ben Sharich’s Glickenhaus as he rejoined after an off-track excursion, earning the MacG Racing driver his own 30-second penalty.

Charles Rainford, in the CCK Ginetta G55, led Class 2 once again, while a little further back in the class, Sarah Moore and Max Coates were enjoying a side-by-side and nose-to-tail skirmish, and Bobby Trundley was cutting his way through in his Team BRIT SEAT, dicing with Nicole Drought, James Little, and American multi-champion Shields Bergstrom. James Bentley was Trundley’s next target, and there was a little rubbing by the two SEATs, as Trundley, who races with the challenge of autism, picked up another place. The podium places for the class were in dispute too, with Shane Stoney’s Ginetta and James Rainford’s SEAT trading places.

By this time, our Class 1 teenage hotshoes were coming back into contention, with Morgan Short having no issues relieving Nathan Wells of fourth place, while Sam Neary got past the Digiplat Racing BMW too, as the halfway point of the race came around, and Isaac Raine, after a major off due to computer freeze, was recovering in his Glickenhaus, newly-sponsored by Overclockers UK, chasing Andrew Tucker’s Team BRIT Mercedes for eighth place.

Now, in the final five minutes of the race, it all began to kick-off for that final podium place. Short’s BMW and Neary’s Mercedes had been closing in on Magnussen’s Brabham, and had been swapping position for the best part of a lap. Neary was late on the brakes into Club, careering down the inside of Short, and collecting the Ginetta of Nicole Drought, who was taking a wide line, ostensibly keeping out of the way of what was coming up behind her. Undaunted, Short and Neary were soon back on Magnussen’s tail – Short was past cleanly, but Neary’s move punted Magnussen into a spin as they entered the Loop, then there was further contact as the BMW and the Mercedes entered the Wellington Straight, a side swipe saw Neary spear off across the front of Short and into the Armco by the bridge abutment, ending a rapid succession of events which saw the race officials award more penalties than a Sunday League cup final, and sadly led to a post-race disqualification for Sam Neary.

And so it was Morgan Short on the final step of the podium, a place he had duly earned., as he recounts in graphic detail: " I bogged down off the line and stupidly didn’t go defensively into turn 3, allowing me to be overtaken and thrown into the midfield. I avoided the carnage caused by a flying Mercedes at Brooklands and got back to P5 on the tail of Shaun Bennetts in the fourth BT62. I got a great run through Maggotts and Becketts and flew round his outside at Stowe, but he misjudged his braking and ran into the back of me, causing damage to the rear. I soon got past him again, but then got damage to my front as a Ben Sharich’s Glickenhaus lagged into my car – it literally teleported into me, I swear this isn’t one of my Dad’s racing driver excuses! From then on I was attempting to nurse the car home. Neary was catching me pretty quickly, and I defended well for a few laps, until he divebombed up the inside into Vale. On the final lap, Neary was right on the tail of Magnussen, and I had a gut feeling something would happen between the two. Lo and behold, Sam collided with the Brabham, and I was able to swerve past the Dane who was facing the wrong way. I pulled alongside Sam down the Wellington straight. He squeezed me slightly, which gave me even more damage, but subsequently threw him into the wall, meaning all I had to do for a second podium was nurse the car home"

Nathan Wells, in his superbly-liveried BMW Z4, held it together in fourth, ahead of Jan Magnussen’s war-weary Brabham, then Andrew Tucker, atoning for his low-key performance in the first race, followed by Isaac Raine, another fine performance from the young Rolls Royce apprentice; "It was annoying, as I made sure I was cautious at the start but was clipped by Sam Neary going into T1, sending me into the pit lane exit. Didn’t fall too far back though, and was battling with Andrew Tucker for a while. The AMGs were way too quick for us though and a couple of computer freezes sent me off at Brooklands and Maggots/Becketts. Otherwise I’m happy I could come from near the back in both races into the top 10, and was pleased to be close to the pace of the other drivers. Brands Hatch seems like a better track for our Glickenhaus, so we should be able to take it to some other Class 1 cars." Shaun Bennett was a demoted seventh, then Alex Day, who had a steadier race in his Mercedes, well up the order at the start of the race, followed by Steve Burke, who didn’t have the best of races in the Team Lizard BMW: "I got another good start and was fighting with one of the Brabhams and Z4, unfortunately i was hit going into Village and came off worse, and the bad luck didnt stop there – when calculating the fuel the sim told me I had 40 minutes worth but for some reason it only lasted 20 – a splash and dash and finished just outside the top ten. Looking forward to the next race and putting enough fuel in the car!" Ben Sharich, atypically penalised in his Glickenhaus, gave a candid appraisal of his race: "It was a case of trying to stay away from anybody with a bad internet connection as I lost fifth place early on due to lag, and countless spins later in the race, and then to compound it all I slid off avoiding a Ginetta and collected someone in the accident. I’d love an excuse for that one but in that case I just ran out of road and talent… All I can say is on to better things at Brands Hatch!"

In Class 2, Charles Rainford waltzed away with the win once again, beating a crop of Class 1 machines in his Ginetta G55 and finishing around half a minute ahead of the similar machine of Shane Stoney – " Race 2 was a lot calmer really, stayed behind James Rainford for the first part of the race, then managed to slip through around mid-distance and edge away a little. Really happy with two 2nd places but Charles Rainford was on another level all night so I’ve got some testing to do before Brands to try and catch him" said the reigning Radical champion.

James Rainford completed the class podium, and this was a race where some of the real-life Britcar class winners fared better than hitherto – Graham Roberts came home fourth in his EDF Motorsport Ginetta, ahead of team mate David Farrow, then Sarah Moore and Max Coates, who had enjoyed some close racing early on, sandwiched CTR-Alfatune’s James Bentley on the scoresheet, though sadly solid performances by Bobby Trundley, Shields Bergstrom, Alain Remius, James Little and Al Boulton didn’t make it into the top 20.