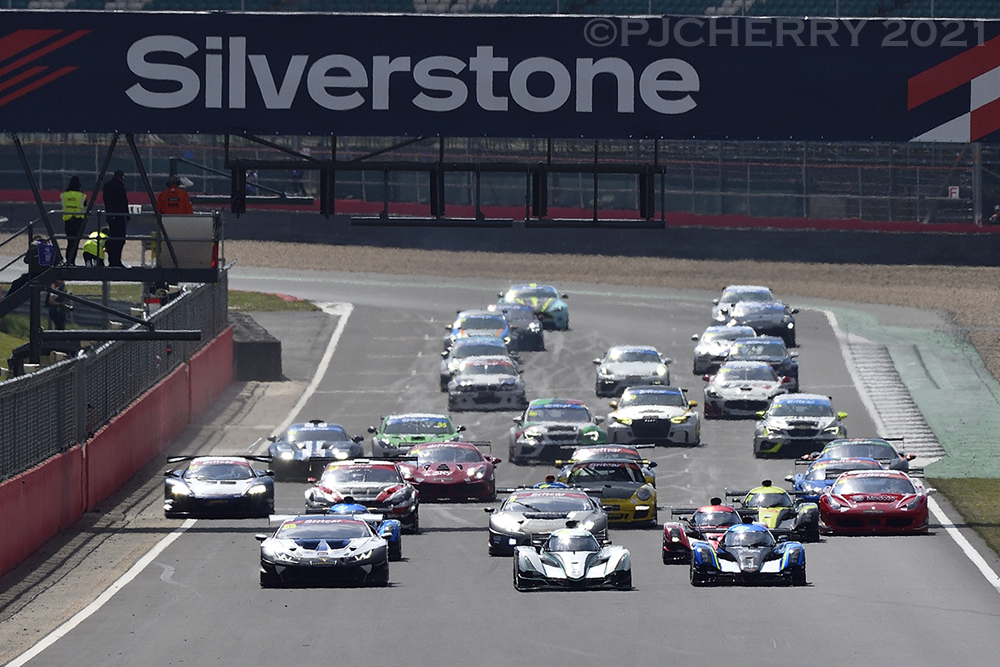 What a start to the 2021 season! Massive grids, exciting racing, and while we have seen some front runners serve notice of intent in our Endurance and Trophy categories – a clear run of class wins in Endurance for the Lamborghini Huracan of John Seale and Jamie Stanley, and the Ferrari 488 of Bon Grimes and Johnny Mowlem place them joint title leaders, while in Trophy it’s been four out of four for the Woodrow Motorsport BMW 1M of Simon Baker, Kevin Clarke and Ollie Reuben – the competitiveness through the classes shows there is a lot to play for, and the varying configurations of the tracks we have yet to visit may favour some different outcomes.

Whilst Richard Morris and "Chippy" Wesemael top the separate Praga category points, a definite leader has yet to emerge, typifying the variables in that Championship, that celebrates diversity and popular culture within the motorsport environment, alongside top-line professional drivers and a strong driver development ethic, supported by a solid and vastly experienced engineering base. The involvement of social media icons such as YouTube star Jimmy Broadbent has raised the profile not just of the Praga marque, but of Britcar, BARC, and the whole national-level motorsport industry, a synergism that should not be ignored.

The success of the Britcar Endurance and Trophy Championships comes from meeting the challenge of giving a diverse array of competitors the many aspects they desire in a championship, and a race weekend, the old adage of "keeping the customer happy", as the following endorsements attest.

Richard Wheeler, long-time sponsor of 2020 Endurance champion Danny Harrison, now sharing the Fox Transport Nissan GT3 with him, and second in the Class 1 points table, remarks: "We chose Britcar because of the ideal blend of track time and the fact it only takes up one weekend day. Having practice, qualifying and two races on the same day means you get a huge amount of time in the car, but you also don’t have the event spread out over the whole weekend with lots of time sitting around. This suits us really well, as after a demanding day of racing we can go home and relax for a day before going back to work, meaning we can balance racing with family time. So when we decided on the Nissan GT3, we decided of all the places we could run it, Britcar was the one for us, and we’ve enjoyed the events we’ve already done, the team that run the events are always on hand and very welcoming, as are the other competitors."

Team BRIT, the burgeoning organisation the focuses on racing as rehabilitation and skill development for the physically disabled and those with Neurodiverse conditions, run front-running cars in both the Endurance and Trophy championships, and comment: "Team BRIT chose Britcar as it offered close competitive racing at the right price point. With different classes across different days it also allowed us to benefit from economies of scale, while offering our drivers a genuine progression path from Britcar Trophy with our BMW’s to Britcar Endurance with our Aston Martin", while the long-established J W Bird team have brought their fleet of VW Sciroccos to the Trophy Championship, team boss Nick Beaumont stating "We were attracted to Britcar after seeing the tracktime that was available over a one-day race meeting. It’s got friendly organisers and drivers, and this year showed big grids in Endurance and Trophy, so we’re always going to be racing on track with other drivers"

So, a good destination for the racer who wants to share their free-time and hone their skills in a friendly, competitive and professionally-run environment, but also a shoo-in for those with aspirations to progress in endurance racing, as Russell Birch, father of Trophy racer Charlotte Birch, and boss of youth-promoting Vinna Sport enthuses: "’ As a young team with aspirations to compete in the world of Endurance Racing, Vinna Sport saw the introduction of the Britcar Trophy category as a perfect first step in this journey. "After a successful inaugural season It soon became apparent that the Britcar paddock was perfect for us. With a fun and professional atmosphere and very well organised events, we couldn’t think of a better championship to run in. Our aims are to soon be running cars in both the Trophy and Endurance Championships in order for us to provide our customers/drivers with the perfect cost effective stepping-stone into the world of Endurance Racing and Britcar is the place to do it. A very big well done to Claire and her friendly professional team for making Britcar such a success, here’s to 2021."

Indeed, 2021 looks to be another step in the success of Britcar and it’s professional partners.