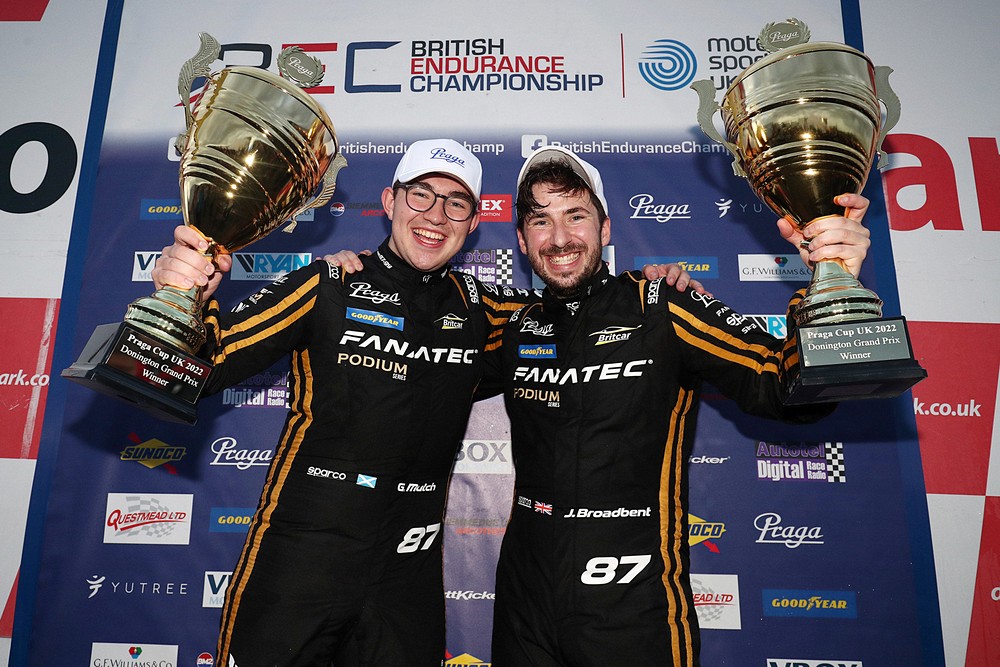 The inaugural Praga Cup UK is now complete and it was once again the driver pairing of Gordie Mutch and Jimmy Broadbent who took top honours with a second win of the weekend, confirming them as Praga Cup Champions. They confirmed this in style as the only driver pairing to have a double win on a race weekend.

For most of the shortened 50 minute race, however, it looked like the Fanatec Praga Team87 car was destined for second place behind the University of Wolverhampton Racing R1 of Shane Kelly, who had taken the lead early on in the opening stint and dominated throughout. But for Kelly his pace would be undone late on as he was handed a two second stop-go penalty for an infringement during his mandatory stop. Despite this, his pace was enough that it was only the win he lost out on and he came home second for the University.

Completing the podium was a return visit of the weekend for Jay Morton and Ben Collins, who had an eventful race as Morton took the Praga twice through the gravel at Redgate. But the pair came back strongly and were there when they needed to be to make it their best weekend of the season.

The race started on a drying track and several drivers were caught out heading into turn one, leaving Jay Morton in the no.85, ‘Chippy’ Wesemael in the no.29 and Dominic Paul in the no.86 all temporarily beached on the edge of the track. Fortunately for Morton he was able to get out and rejoined the safety car queue on the lead lap, whilst Paul and Wesemael both ended up a lap down having been towed out of the gravel. Wesemael was then forced to retire the car several laps into the race.

At the restart, Broadbent led in the no.87. Ed Bridle in the Idola Motorsport no.84 Praga was passed by both the no.4 of RAW Motorsports’ Ben Stone and the no.11 UWR car of Kelly, who also quickly passed Stone into the Melbourne hairpin, then caught and passed Broadbent for the lead a couple of laps later. Kelly increased his lead throughout the opening stint and was on for the win. He managed to maintain the eight second gap to Gordie Mutch in the second stint before the stop-go dropped him behind the Scotsman.

Second place in the championship was still up for grabs between three teams: Mittell Cars’ no.77, RAW Motorsports’ no.4 and Idola Motorsport’s no. 84. All three had a messy race with Charles Hall’s no.77 stuck in fourth gear at the safety car restart, but he and teammate Scott Mittell nursed the car home to classify for points and second place in the Championship. Ben Stone and Rob Wheldon had poor luck on Saturday and it continued on Sunday as Stone came off at Goddards and then, after re-joining, had to retire the car for a second time this weekend.

The third team in the running, the Bridle brothers, were on course to finish third. Chris Bridle had managed to stay in touch with Broadbent during the opening stint and then leapfrogged the no.87 in the pits. Ed Bridle was passed by Mutch early on and then a mechanical gremlin meant a late stop put paid to a fourth consecutive podium and a finish behind title rivals Mittell and Hall. 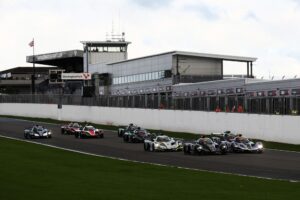 RAW Motorsports’ second car, the no.31 piloted solo by Rod Goodman, enjoyed a steady and consistent race to finish fourth: his best result of the season. The Idola Motorsport no.86 had an unlucky first stint, as Dominic Paul was involved in two no-fault spins but handed the second stint to Alex Fores who held fastest lap until Mutch snatched it on his final lap of the race.

During the podium presentations which followed the race, Shane Kelly was awarded the Driver of the Day Award.

To watch the race in full visit the BARC YouTube channel here: https://www.youtube.com/watch?v=anE7DwhcjhQ