Bumper Grid for the Britcar Endurance Championship at Silverstone 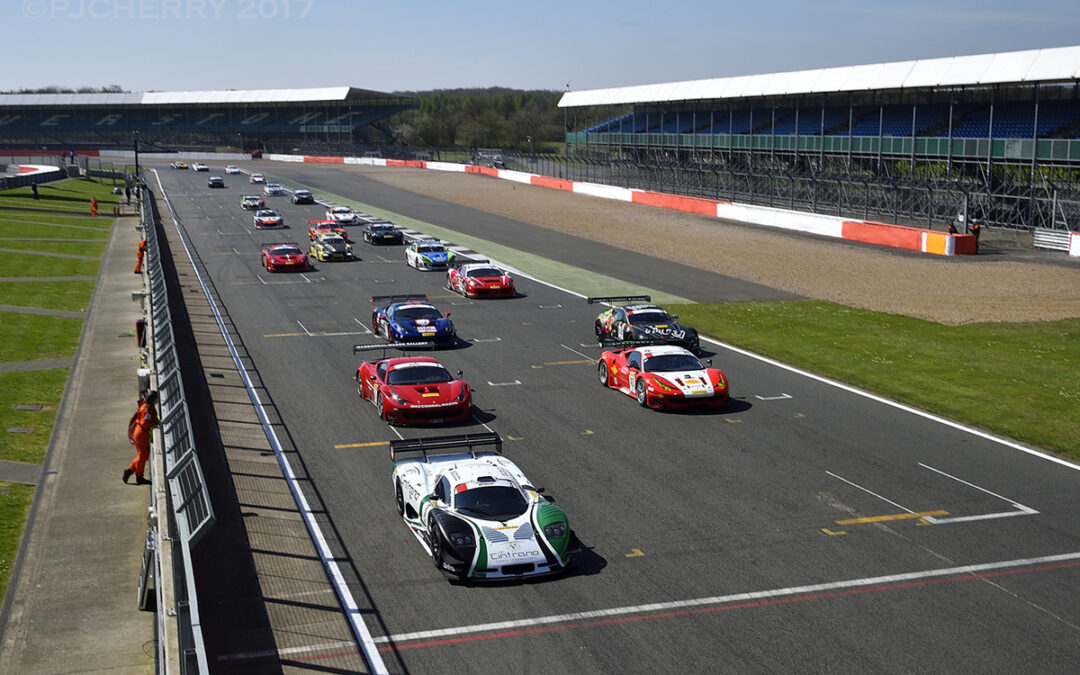 For the "gentleman driver", for the hobbyist, for the garagiste – along with pro-driver coaches, the mainstay of Britcar’s clientele – the chance of racing on the country’s premier track configuration, the glorious Silverstone Grand Prix circuit , is an opportunity not to be missed, and hence the Britcar Endurance Championship and concurrent Britcar Sprint category are looking to a grid of over 40 competitors for the next round of the Championship on June 24th.

And it’s not just the regulars – the draw of this circuit extends to entries from national and international stars taking an additional opportunity to race here. With all five classes subscribed for a full-points scoring round, let’s take a look at who’s coming along.

Class 1 of the Endurance championship features the heavy-hitters – overall wins so far this season for Nigel Hudson/Adam Wilcox (JMH Aston Martin Vantage GT3) and the MJC Ferrari 458 GTE of returning ex-champion Witt Gamski and young hotshoe co-driver Ross Wylie doesn’t necessarily single them out as favourites; returning after a short absence are the Spanish duo of Manuel Cintrano and Javier Morcillo in the venerable but expertly-prepared Mosler MT900, and we shouldn’t discount the power and improving reliability of Jonny MacGregor’s self-built Taranis, run by the family MacG Racing outfit.

Of course, given the right conditions and circumstances, it’s wholly possible that a Class 2 machine can post an overall win, and twice already this season that has happened, both times to a Challenge-spec Ferrari 458 of the crack Silverstone-based FF Corse squad, and Bonamy Grimes, partnered by international ace Johnny Mowlem, will be looking to repeat their winning performance on the venue’s International configuration two months ago, with the team’s chances boosted by stablemates Graham Lucking and Leyton Clarke in a similar machine. Veteran campaigner and erstwhile Britcar race winner Ian Heward retums in his rather special Porsche 911 RSR, and the peripatetic WDC Racing outfit spread themselves over several classes, their entry for this category being a Ferrari 458 for one, two or all of the Neil Garnham/Rob Young/Matt Le Bretton line-up.

Class 3, basically for GT4-spec cars, is ultra-competitive anyway, and will be made more so by the addition of a couple of significant Invitation entries. The class is where the current overall points leader sits – the Team Hard Ginetta G55 of Simon Rudd and Tom Barley, who have enjoyed internecine squabbles with team-mates Toby Bearne/Daniel Wylie, Darron Lewis/Tom Knight and teenage sensations Angus Dudley and Callum Hawkins-Row, though often spoiling the Team Hard clean-sweep of the class podium has been father and son duo Peter and Mark Cunningham, having arguably their best season ever in the SG Racing Porsche 997. Multiple Britcar class champion Mike Moss joins Scot Adam in the Moss Motorsport BMW 1M, a unique and advanced work of genius prepared by Woodrow Racing, and 2016 Rookie of the Year Chris Murphy is partnered in the Whitebridge Aston Martin Vantage by Dean Gibbs, but some new points-scoring entries, plus the Invitees, will be looking to upset the applecart- Britcar’s very own media guru, renowned Porsche protagonist Chris Valentine makes a welcome appearance alongside Canadian Fareed Ali in the Newbridge Motorsport Porsche Cayman, and Brent Millage has also entered a Ginetta G55, but attention may be turned to Chris Headlam’s very special Lotus Exige, and the Beechdean Aston Martin Vantage of TV personality, Aston Martin fanatic and quite handy racer Paul Hollywood, partnered by team boss, Le Mans racer, former BGT champion, football club owner and the world’s fastest ice cream man, Andrew Howard.

The Sprint category – a race within a race – will have two 50-minute counters at Silverstone, and Class 1 is age and experience in equal measure, with the FF Corse Ferrari 458 GT3 OF David Mason and Calum Lockie up against Kevin Rilley’s National Motorsport Academy Mosler. The cars in this category will be racing within the Endurance runners, and being identically classified, thee won’t be much difference in their relative pace. Therefore, for 50 minutes, Class 3 in particular will be crowded; WDC Racing turn up again here, fielding either their Porsche 911 or BMW E92 GT4 for the Garnham/Young duo, and with class stalwarts Rick and Brad Nevinson’s Track Focused Porsche Cayman to the fore. Fox Motorsport will also be entering a Cayman for Mark Murfitt/Michael Broadhurst, and a Lotus Exige from Rob Boston Racing will also be on the grid.

The polarisation of Aussie V8 Supercar fandom is brought to Silverstone in Class 4, where Andy Robinson pitches his Ford Falcon against Alex Sidwell’s Holden. Jags Bhamra, in his BMW M3, will be a bit of an unknown quantity, though well-known is the success so far of lone-driver Ed Moore, who will be joined from this meeting onwards by fellow teenager Marmaduke Hall in the Tockwith Ginetta G50. Both singleton pilot Marcus Vivian (Reflex Racing Ginetta G40)and the VW Golf of Roland Hopkins/Matthew Sleigh have tasted Class 5 success this season, and will be joined at Silverstone by Richard Woods’ Ford Focus.

Has there ever been such a grid, in quantity, quality and diversity, in recent times? From supercars through to saloons, from International pro-drivers through to weekend warriors, some of whom have raced at the very top-level of endurance competition, and some that are on their way there in the very near future. Who wouldn’t want to be part of this?