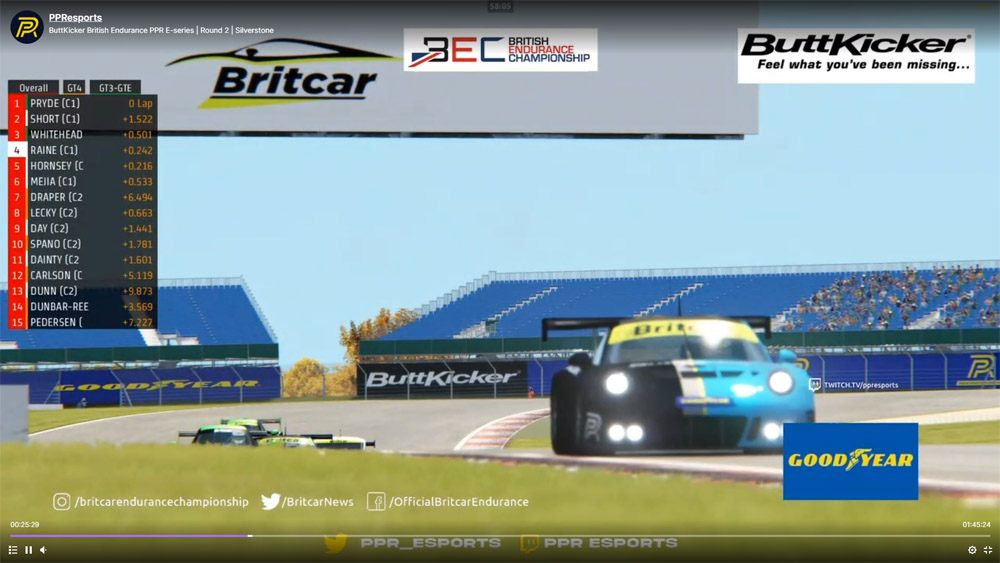 The second round of the Britcar Buttkicker E-series was held at Silverstone on Saturday. Cody Pryde won a brilliant race where in a lot of cases, battles went down to the final corner. Tony Draper drove another dominant race, winning his class convincingly.

Morgan Short in the Radical RXC Turbo started on pole but was overtaken by both PPR Porches at the start of the race, with Pryde claiming first. Short made a place back at Maggots’ getting past Whitehead, while Isaac Raine spun into Abbey losing out to David Hornsey and Nester Mejia, who was racing from Ecuador.

In Class Two, Draper stormed off into the lead followed by Alasdair Lecky who drove a quiet race on his was to second. Archie Dunbar-Rees, Denny Dunn and Ole Pedersen all had issues at the start and started effectively from the pitlane. Dunbar-Rees passed Dunn early on and then began moving up the field, passing Landon Carlson and Ash Dainty almost at the same time through The Loop. Not wanting to be out done, Dunn then got past Carlson and Dainty through Stowe and Vale.

Still charging, Dunbar-Rees caught up with Peter Spano and Alex Day but had a bit of trouble passing Day through Copse with the pair colliding. His next attempt at getting past Day was far more successful as he produced a brilliant switchback move through Stowe. Dunn also had slight issues on his first attempt at passing Day who had good pace in his TCR Cupra but was very loose through the corners. So when Dunn went around the outside at Stowe, Day understeered into Dunn who went wide. Shortly after, Dunn then had an issue and had to retire his car from the race.

The Class One runners had been running their own management in the first stint. Short pitted first followed by Raine while Pryde then pitted a couple laps later. Whitehead and Hornsey then came in on the next lap and Hornsey had a faster stop in his Morgan and passed Whitehead in the pitlane, coming out behind Short who had closed a gap to Pryde but lost out when lapping traffic. Short fell back towards Hornsey who tried a bold move into The Loop but tagged Short’s Radical spinning it around. Whitehead then got past both machines while Raine tucked in behind Hornsey. For Short it would go from bad to worse as his pedals failed and he pulled out of the race later on in the lap.
Hornsey, followed by Raine caught back up to Whitehead and it looked like he had pace to pass the Porsche but a mistake through Abbey put the his Morgan on the grass and let Raine past. This off let Whitehead stretch out a couple more tenths and kept his second place.

While things were changing behind, Cody Pryde had run a great race after he took the lead on lap one, and even a slight bump with Ole Pedersen’s out of fuel Maserati coming into the final complex of corners couldn’t stop young Pryde from taking his first win of the season.

In Class Two Draper completed his dominant drive with the win while Lecky had done enough for second despite being caught by the charging Dunbar-Rees, who spun his Ginetta at Club trying to get a better drive behind the Cayman. Despite the spin, Dunbar-Rees came home third, Day fended off Spano for fourth, the latter of which had put a bold dive into Stowe on the Cupra driver in what turned out to be a crazy final lap.

After-race quotes:
Pryde: "really enjoyed the race" "looking forward to it [Oulton]"
Whitehead: "I kept out of trouble" "took a different strategy to Cody"
Raine: "morgan is so fun to drive, but difficult in traffic"
Dunbar-Rees loaded up his low fuel quali setup and had to reload his setup and ended up starting a minute down on the field: "really excited for Oulton park"