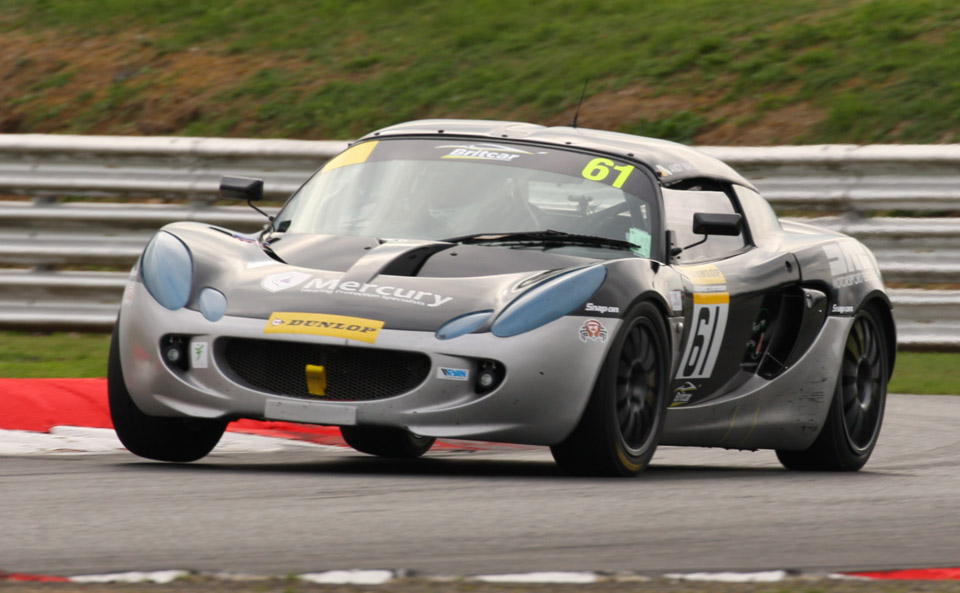 Britcar – supercars, saloons; professionals, hobbyists, gentlemen drivers; transporters and trailers. An eclectic mix, with racing throughout the field, nobody just making up the numbers. Get a team to run your car, or self-engineer; there’s a place for everyone, and two worthy competitors who race in Class 5 of the Sprint category, approach the Championship with the same enthusiasm and possibly more brio, as the guys at the sharp end of the grid.

Neither Andy Napier nor Rob Baker had aspirations of circuit racing as youngsters, though both did have a latent interest in varying forms of motorsport.

North-Londoner Andy Napier, whilst growing up in a family with no interest in motorsport, has fond childhood memories of 1980s F1: "Watching the vital and captivating driving of Piquet, Lauda and Prost whilst laying on my Grandparents living room floor in Cheshunt, but that was as close to motorsport as I really got in my childhood". It would then be a couple of decades on before Andy re-kindled his interest:" In my late 20’s and I was earning enough money to have a track car, and had developed a pretty serious going-round-in-circles habit. One day an instructor said ‘You know, you’re really not bad at this. You should consider getting your race license’. If I ever discover who it was I shall equally thank and curse them for the gift of motorsport". So, a Lotus Exige S2 Toyota was purchased, and for a couple of years Andy dallied in Sprints and Hillclimbs, with no real thoughts of circuit racing, but then the Lotus On-Track Elise Trophy was introduced,,and Andy was enticed by the burgeoning grids; ” Having had a Lotus Exige as a track car for a few years, it seemed like the obvious place to graduate for the next stage of my journey in motorsport. The only way I could afford to go racing was to take on as much of the mechanical prep as possible myself. So my shiny, nearly-new S2 Toyota Exige was sold and the money was reinvested in a non-running 1999 S1 Rover Elise, trailer, tools and race upgrade parts. Over the course of the following nine months, with a lot of help to which I am still indebted, that shed of a car was rebuilt as a competitive race car".

Andy’s racecraft improved exponentially over the next few years, and, with his loyal band of friends and helpers, the small team progressed from the sprint format of the Elise Trophy to the mini-endurance format of Lotus Cup UK and its 90 minute races as a solo driver.and, after years of persistence and hard work, won the Production Class of Lotus Cup UK in 2013. The following year saw Andy take some time out from racing, having become a dad, and an ARDS instructor at Silverstone, though he was back to his winning ways with the Classic and Sports Car Club in 2015, taking his Elise S1 to 10 out of 10 class wins in Modern Classics Series (taking home the overall Series trophy), as well as another seven class wins and two class second places across their New Millenium and Open race series.

Andy found that hard to follow, so took some further time out, until his yearning to get back onto a grid coincided with the relaunch of Britcar; "It seemed the obvious place to go – being a dad, the ‘everything done in a day’ format really appealed as I could race and still have a full Sunday at home with my family. Financially it also meant only having expenditure for team accommodation for one night. The calibre of other teams, guaranteed garages, professional hospitality and media presence were all attractive as my team had now matured in terms of where we wanted to position ourselves. I would never have the budget to race in British GT, and the power and performance index of GT Cup had nowhere for an Elise to sit. It was an obvious step up in terms of what we’d attempted previously, and it was clear even in the early stages of dealing with Claire that the whole operation was going to run like clockwork, which was reassuring given the amount of time and effort we’d need to put in to not embarrass ourselves as probably the smallest, most ‘do-it-yourself’ team".


There is both contrast and similarity in Rob Baker’s route into Britcar; Rob’s family were heavily involved in motorcycle racing, and he was indoctrined into the family sporting activities; "I have always tinkered, making bikes go faster, or handle better, mostly self taught, even down to building frames from scratch, making my own jigs etc. I worked in the bike industry for 20 years, working for manufacturers, race teams, magazines etc" It was in 2000, while working in Imola, that Rob saw his first Smart car, and he was hooked; " I immediately bought one and still own it 18 years later, with a one of 800cc engine pulling 160BHP in it that’s has been featured on TV (Fifth Gear) and in Magazines and got renowned in the Smart world for doing, what some people might say, stupid things to them". Such was his burgeoning reputation in the Smart car world, Rob was invited to join an independent dealer, for whom he worked for nine years, before leaving eight years ago to start his own business, setting up S2Smarts, and simultaneously studying for a degree in Performance Car Technology.

S2Smarts has expanded through the years, installing a rolling road, and now has a customer base stretching throughout Europe, with owners from afar as Spain bring their Smart cars to Rob for his expert attention. The business, though, remains compact and economical; " We may sound like a big company, but there are just three of us – myself, Tony who does all the tuning and the rolling road side of the business, and Matt who works for me and is a total petrol head. At most meetings, you will only see Matt and myself working on the car, as if there is an issue, I will have to dive in to sort the problem with him and hope it can be sorted prior to me racing it too".

Rob was a relative late-comer to racing, having started in 2012 in the ForTwo Cup after being involved with the tuning side of the race cars initially. "After a test at Silverstone, where I was taken out in one as a passenger and was trying to tell the driver, you can go faster here, or try this gear, and they said, do it yourself, so I did. I took my ARDS, bought a car and built it and competed for a couple of seasons in the FourTwo Cup before leaving the series and racing it in the Classic Sports Car Club Modern Classic Series, actually winning my class in 2014 against some very competitive race cars, none of which were Smart Cars. During that time, I had had the chance of working with Tockwith Motorsport when they ran the Smart ForFour at the 24hr Britcar race at Silverstone and not long after, go the chance to buy the same car, albeit, it was a stock engine etc, with Roll Cage, suspension, Brakes, exhaust and seat. I ran this in the CSCC Modern Classic Series and although did well, knew there was more to be had from the car, and me. Towards the end of 2016, I was enticed to do the last round of Britcar at Brands, and I jumped at the opportunity and loved every minute, although was daunting against the faster cars. But respect to everyone out there and the professionalism of the drivers and series, I was hooked, with this year being my second full season with Britcar".

Having built a somewhat unique machine, Rob was stymied by the available development opportunities; "The car was run fairly standard for a short while, as we started to learn what was available to make it more competitive. Unfortunately, nothing – we have had to develop almost everything ourselves, from designing our own pistons and developing what can be done to the engine and gearbox and clutch and how, down to working with the likes of Bilstein over two years developing the suspension in to what we have now, as nothing can be bought of the shelf for one of these cars for racing. I designed all the aero, studying what others had and how things work and implementing it in to the car, making changes as we go along. The car has come a long way since we first purchased it as a road car and the only items remaining from its original form, is the chassis and Roll Cage. Everything else has been changed and modified and reworked in the hope of making it better. We have had our issues, with heads lifting, clutches failing, gearboxes failing and have had to sit down and think why and then make it better and stronger and quicker, but also making it more reliable and intend to carry on developing what is a unique and hopefully, appreciated race car in Britcar, with the support of Tockwith Motorsport, to whom I extend a big thank-you for their understanding of this project".

So, two drivers, both relative late-comers to racing, both preparing and engineering their own cars, both having graduated successfully through the CSCC championship, and, whilst a far cry from the pro-teams at the sharp end of the grid, very much an integral part of the eclectic competition within Britcar, and who understand their role as part of the championship, as they both explain – Andy first: " Coming to Motorsport as a late bloomer gives me a somewhat unique perspective on things. By the time many other team owner / drivers have reached their early 40’s they may have seen it all (or seen enough). Sure, I come to a race weekend in Britcar as a driver, but I also come as a giddy fan of Motorsport. I’m nowhere near that jaded or cynical that I don’t stop to gaze at Richard Neary’s AMG GT3,.and when Johnny Mowlem blasts past me around the outside at Copse at an unfathamoble closing speed I get goosebumps that can’t be found anywhere else for an attainable price in what is still essentially club-level Motorsport. And that for me is the beauty of Britcar!" to which Rob adds:" Although I don’t have the fastest car out there, the respect we get from the drivers and teams and organisers, is the reason I love racing in the series. I understand sometimes I may get in the way, not without not wanting too, but with the variation of cars on the grid, it is bound to happen sometimes and everyone knows that, but it is this variation that makes the series so good".