Croft Round 1: A Radical Start to the Endurance Season – and Some Smart Moves in Trophy 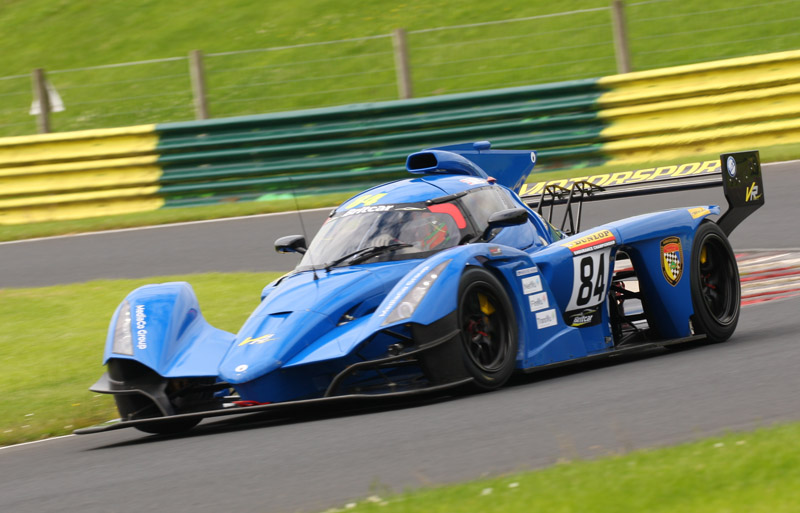 Steve Burgess and Ben Dimmack, driving the reconfigured RAW Motorsport Radical RXC Coupe, took a convincing win in the season-opening 50 minute race at Croft, and, in a joint grid of Endurance and Trophy runners, John Packer, driving alone in Rob Baker’s new-build Smart ForFour played the race just right to cruise home to the Trophy victory. This was a race where latent talent at last shone through, some drivers – and cars – showing their true mettle in their best-ever Britcar performances.

It might have been a different outcome if the two turbocharged VR Motorsport Pragas hadn’t had problems though; teenage sensation Danny Harrison had set the mark in a disjointed qualifying session (two red flags) in the "art car" R1T, while team mate Jack Fabby was just a quarter of a second shy in the blue car, shared with Gary Townsend. Harrison, though, didn’t take his place on the grid, as the team were hurriedly fixing a fuel pump issue, and so the race took a different aspect as the red lights went out, and Fabby went straight into the lead, which was 6.4 seconds ahead of Steve Burgess’s Radical as they crossed the line for the first time, while an amazing third was Marcus Fothergill in his new Porsche 991, up from eighth on the grid. Fabby’s lead didn’t last long, the blue Praga was missing next time around, Burgess took the lead and the Safety Car was scrambled. Fabby’s car was recovered back to the pits, with a sheared drive shaft needing to be fixed, and it was one in, one out, as Harrison’s "art car" got into the race under the Safety Car period. The VR team did a terrific job of replacing the drive shaft on Fabby’s machine, and he was back on track, to rapturous applause, within two and a half minutes.

The caution was lifted with 35 minutes left to run, with a very different complexion to the race; Burgess led in the Radical Coupe, Fothergill’s Porsche was second (when did I last write that??) with Sean Doyle in the Valluga/CJJ Porsche Cayman third, ahead of Paul Bailey’s Ferrari 488, Martin Byford’s SEAT, and Britcar newcomer Nathan Wells in the Woodrow-run BMW M3 GTR. Ben Sharich, starting in the MacG Racing Taranis, had opted for a cautious start, and was seventh, while Warren McKinlay had started the naturally-aspirated Praga from the pit lane, and was up to 12th. In the Trophy category, Jas Sapra’s BMW led Barry McMahon’s Alfa 156, while Oliver Smith’s up-to-now third placed BMW expired going into the hairpin and was pushed into the pit lane. Fabby’s Praga was quickly fixed, and he was back into the race in 22nd place – that was all three Pragas now racing, but with work to do.

Sean Doyle got past Marcus Fothergill, who was being chased by a three-way battle between Bailey, Byford and Wells. That came to an end when Wells made an ambitious move down the inside of Fothergill’s Porsche at the Complex; there was a clash, the BMW limped to the pits, and would post a few exploratory laps before retiring, but the Porsche had steering arm damage and was stranded on the grass, calling, rather belatedly, for another Safety Car intervention. Just before the caution was implemented, and with 26 minutes to go, the mandatory pit stops had started to be taken, and with the track now on full-course yellow, the whole field elected to take their stops, making for a very busy pit lane.

Britcar debut for Irish pairing in the Porsche Cayman

The green flag was given with 16 minutes to go, and with the second drivers now in the cars, we had Ben Dimmack’s Radical just five seconds ahead of Ashley Woodman in the EDF SEAT, who in turn had over a minute’s leeway on Ross Wylie in the SB Ferrari started by Paul Bailey. followed by Nicole Drought, who had taken over the Valluga/CJJ Cayman, whilst coming up fast was Martin Compton in the VR Motorsport Praga R1, after a stunning drive from the back of the field by Warren McKinlay, the two armed forces veterans at last able to show their true skill. Coming out on top in Trophy was John Packer, who had made good use of the Safety Car / pit stop scenario and hauled Rob Baker’s new Smart ForFour into a surprising lead, mixing it with the big boys in sixth place. Earlier, Jas Sapra had retired his BMW from the category lead, and Barry McMahon had slipped down the order, leaving Chrissy Palmer’s MX5 in second place, with the similar car of Mike Hart and Chris Clarke third.

With the Radical extending it’s lead over Woodman’s Class 4 SEAT, the focus was on the possibility of Wylie seizing second place; the Ferrari was around six or seven seconds per lap faster, and a quick calculation identified that he’d have to pull out a little more from the bag to pass before the flag fell. As it was, the job was done for him, the officials slapping Woodman an eight-second penalty for a pit lane misdemeanour, making it a done deal.

The flag fell at a nice clean 30 laps, Steve Burgess and Ben Dimmack having their first win in Britcar, and in the Radical Coupe, with the new partnership of Bailey and Wylie in the SB Ferrari 488 half a minute behind, and a triumphant Ash Woodman redeeming a dismal 2019 by bringing the EDF SEAT home third overall, and victory in Class 4. There was also redemption for Compton and McKinlay, upholding honours for VR Motorsport with the first Praga home, completing the Class 2 podium, ahead of Class 4 runner-up, the Cayman of Nicole Drought and Sean Doyle.

We go down to sixth place to find our Class 1 winner – MacG team boss Jonny MacGregor did what was necessary to seal the class win for the Taranis after Ben Sharich’s solid stint, mindful that Danny Harrison’s recovering Praga R1T was 30 seconds behind, and they were split in the result by Chris Hart, who consolidated on a good opening stint by fellow Fun Cup exponent Stephen Walton, in the FNS Ginetta G55. Britcar debutante Dave Scaramanga bagged fourth in Class 4 in his Ginetta G55 shared with pro-driver Will Powell, and Garry Townsend at least scored a Class 1 podium in the Praga R1T started by Jack Fabby.

The Trophy category saw an emotional win for Rob Baker’s Smart ForFour, single-driver John Packer finally finishing a stunning ninth overall, and paying homage to Rob’s determination and engineering skills, and the expert assistance from EDF Motorsport. This stellar performance also earned Jon the Driver of the Day award. Long-time MX5 supporter Chrissy Palmer led the Class 6 contingent, with Brad Kaylor’s SEAT Cupra Mk 1 runner up and Bill Forbes’ Ginetta G40 completing the Class 6 podium. Super-coach Adriano Medeiros assisted young Charlotte Birch to fourth in the Vinna Sport G40, only one and a half seconds off the podium, with the Majestic Motorsport MX5 Mike Hart / Chris Clarke fifth. Class 5 runner-up was the Porsche Boxster of Anthony Hutchins, and Barry McMahon salvaged his race, claiming third in his Alfa 156. Sadly, Oliver Smith’s BMW took the flag but was unclassified, being nine laps down. In all, the new Trophy contenders had performed well within Endurance race, with both categories performing respectfully.