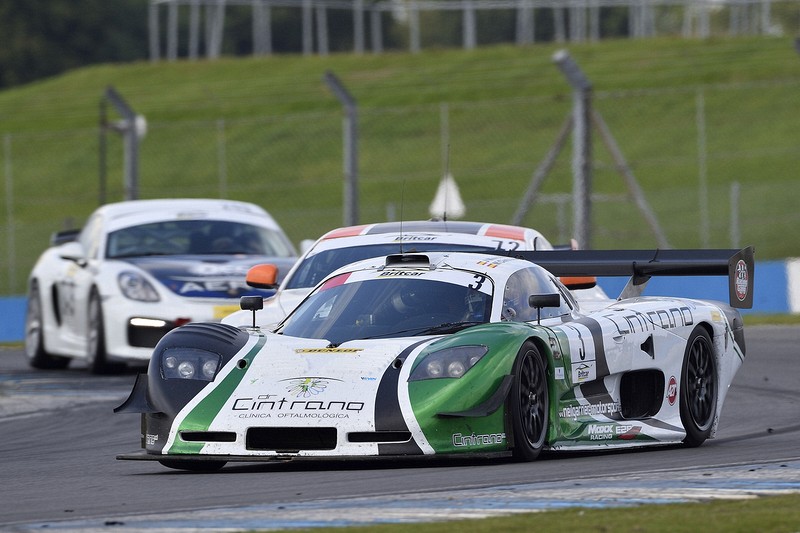 Returning Spaniards Manuel Cintrano and Javier Morcillo took the Neil Garner-run Mosler to a convincing win in the 50-minute race at Donington, which, more than any other race this season, was influenced by the "success penalty" applied to pit-stop timings. That’s not to take anything away from some magnificent performances, though, and quite a bit of misfortune and upset for certain teams.

Morcillo had stamped his authority by setting pole in the thirty-minute qualifying session – well, it was to be thirty minutes, but with errant cars stopped out on the circuit with varying issues, waved yellows turned to a red flag with three minutes of the session left to run, which was no help to Ross Wylie, who had just had a new set of Dunlops bolted onto Witt Gamski’s MJC-Furlonger Ferrari 458 GTE, and was about to have a final attempt at pole. As such, he had to be content with third on the grid, behind the Calum Lockie/David Mason GT3-spec 458. The wounded cars from this session had mixed fortunes for the races ahead – the Frank Bradley/Kristian Prosser BMW M3 was fixed, and the Ginetta G55 of Chris Papageorgiou/Jayde Kruger would miss Race 1 while a new clutch was fitted, as would the similar Team Hard machine of Dudley/Hawkins-Row, a gearbox issue being sorted. Not making it at all though, would be the Ford Focus of Richard Woods/Ray Grimes (sheared gearbox shaft) and sadly, the race-debuting Arrinera Hussarya of Jonny MacGregor, which lunched its LS3 engine. Jonny, though, had a trick up his sleeve for the second, two-hour, race of the day.

As the red lights went out, Lockie made short work of getting in front of Cintrano’s Mosler, and the all-red FF Corse Ferrari was, as usual, off into the distance, 30 seconds ahead of Witt Gamski’s 458 by ten laps into the race. Cintrano held it steady in fourth place, Bon Grimes having to contend with the straight-line speed of the Mosler before pushing his Class 2 Ferrari 458 ahead, and a fast -starting Darron Lewis couldn’t believe his luck ("I passed five cars round the outside of Craners, it was a real oval move") and was an impressive fifth in the #285 Team Hard Ginetta G55. Not starting at all, though, was young Oliver Willmott, a water pipe on the Porsche 997 having failed on the pace lap, and overheating issues were plaguing Ed Moore too, the Tockwith Ginetta G55 being driven straight into the garage for attention after five laps, and Alan Pubrick’s Saker was out of the race too, a potential blown engine being compounded by a recovery incident which damaged the rear bodywork.

Lockie’s lead had stretched to 45 seconds over Gamski, who was now threatened by Grimes, by 20 minutes into the race, then the mandatory pit-stops started, Gamski, Grimes and Cintrano all coming in for the potentially faster drivers to take over, and this is where the race turned on its head – maximum 150 seconds for the series-leading Ferraris, but just the basic 90 seconds for the Mosler by dint of missed rounds and DNFs. Lockie stayed out for the maximum allowable stint, and David Mason, too, had to stew for 150 seconds in the pit lane before being let loose.

The pit stop timings had an effect in Class 3 as well; Mike Moss and Scot Adam were having a great run in the BMW 1M at last, and once the pit stops settled were leading the class, ahead of the Cunningham’s Porsche, and the Whitebridge Aston Martin, Matty George capitalising on a good first stint from a rejuvenated Chris Murphy. Suffering, though, were the two Team Hard Ginettas, the Rudd/Barley and Lewis/Knight dropping atypically to the rear of the class group.

Morcillo was now flying in the Mosler, having taken the lead through the pit-stop phase, and setting a fastest lap early in his stint. Wylie, now in the MJC-Furlonger 458 GTE, mounted a worthy pursuit but, with the Ferrari marginal on overheating, went for sensible conclusion, finishing a minute adrift at the flag, with Charlie Hollings taking the Class 2 win, third overall, a lap further back in the 458 Challenge started by Bon Grimes, ahead of FF Corse stablemate David Mason, capitalising on Calum Lockie’s good work to take the Sprint category win.

Mike Moss and Scot Adam’s fortunes turned in the BMW 1M, completing a race distance and taking the Class 3 win by half a minute over the Cunningham’s Porsche – Peter had held it steady midfield in the class, and, aided by the pitstop timings, Mark hauled it back to the front of the group. Matty George looked towards a podium finish in the Whitebridge Aston Martin, but the circuit had thrown the team’s fuel consumption estimate, and he was struggling towards the end, with Simon Rudd’s Ginetta G55 advancing. Cruelly, George and Chris Murphy’s efforts went for nothing, as the Aston pitted one lap from the end and was classified as a DNF, leaving the final podium spot to the Rudd/Barley Ginetta, which was separated from its team mate, the Lewis/Knight machine, by dint of a pit-stop penalty, by the sinister-looking closed-body KTM X-Bow of Mike McCollum and Sean Cooper, a worthy debut for the stunning Reiter-engineered machine. Marcus Clutton used all his experience in the Track Focused Porsche Cayman, two-wheeling round corners to take the Class 3 Sprint category win ahead of the Dave Benett/Marcus Fothergill Porsche 997, not having the best of days, and in Class 4 the Sprint victory was taken by Sam Alpass in his BMW M3, while Class 5 went to Britcar newcomer Adam Hatfield in the Team Hard ex-BTCC VW Passat, ahead of Barry McMahon’s Alfa Romeo 156. Those two were racing as Invitation entries, so the championship points went to third placed Roland Hopkins and Matt Sleigh, building a nice points tally in their VW Golf, while poor Rob Baker was a non-finisher in his Smart 4/4, as were Colin Willmott and first-timer James Crabtree in Willmott’s recently re-acquired BMW M3.
The Eureka BMW M3 had endured brake issues during Free Practice and Qualifying, but Rob Hudson and Adriano Medeiros made the best of it in the race, taking the Class 4 Endurance win, and novice Gleb Stepanovs performed well in the Newbridge Porsche Cayman to achieve sixth place in Class 3, assisted by veteran historic/Aston racer Les Goble.

It had been a fallow season for the Cintrano/ Morcillo pairing thus far, but they, and Neil Garner’s team, showed they had lost none of their flair. With "success ballast" being applied to the pitstop timings for Race 2, perhaps there might be some equalisation?