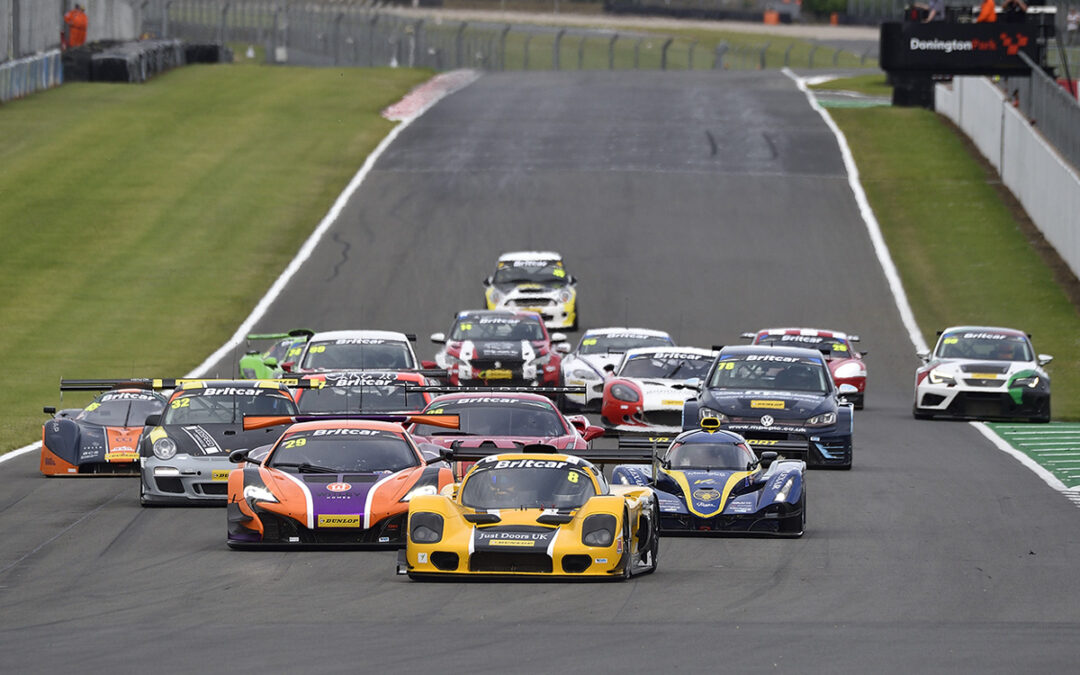 Sometimes it falls just right for you, but that’s not to detract from a fine performance – a glance at the Class 1 lap times identifies he would have been up with the leaders in any event.

In warm, sunny conditions, MacGregor served notice of intent straightaway as the red lights went out and the pack was let loose from the rolling start, the yellow Taranis bursting from the second row to challenge Ross Wylie’s Ferrari 488 into Redgate, while pole-sitter Al Boulton, in the Praga, made a cautious start and dropped to fourth behind Lee Frost’s McLaren 650s, and just ahead of an on-form Mark Cunningham, driving alone in the SG Racing Porsche 997.

It wasn’t long before Cunningham’s fast-start advantage was brought in to check by the faster Class 1 and 2 cars, with the Sakers of David Brise and Paul Rose both stamping their authority, though Paul Bailey, taking the opening stint in the SB Racing Ferrari 488, maintained station behind the Porsche. Rose’s team-mate, Steve Harris, was having trouble with his Saker, dropping to the back of the field as the engine intermittently cut-out, , before pitting for attention. Meanwhile, it was all action in Class 4, with Graham Roberts’ Ginetta G50 the early leader, ahead of Max Coates’ SEAT Cupra, while Tim Docker’s Golf, Sarah Moore’s G50, and the Porsche Cayman of Michael Price duked it out for third.

Just as Harris rejoined, team-mate Rose went off at Redgate, the black Saker being beached in the gravel, and with the Valluga Porsche of Ian Humphries also stranded out by the Old Hairpin, the Safety Car was deployed. With barely a quarter of an hour of the race elapsed, it was too early for the majority of the field to take their mandatory stops, but the less-restricted single-driver entries could take advantage, so Daniel Woodard’s Mini JCW, Tim Docker’s VW Golf, and the front-running Taranis of McGregor and Porsche of Cunningham dived for the pits. Up to this point, MacGregor had been keeping Wylie honest – the Ferrari was never more than seven seconds up the road – and with a 90-second pit stop not being much different to the time of lap under the Safety Car, the Taranis was still on the same lap, and just three-quarters of a minute behind the #7 Ferrari once the caution, which lasted three laps, was lifted.

First to stop once the mandatory 24 minutes stint time came up was Paul Bailey, who had been steady in seventh place in the Ferrari 488, handing over to Andy Schulz. Al Boulton, in the Praga, had been closing on Lee Frost’s McLaren, but pitted fairly early too. This was a chaotic pit stop for the Praga, the events of which captured the attention of the pit officials, and once new driver Tim Gray got onto the track, he was called back in for a drive-through penalty.
Last to pit were Ross Wylie, handing the leading FF Corse Ferrari to David Mason, and Martin Byford, from an amazing third place in the EDF-run SEAT Cupra, handing over to Ashley Woodman.

So, with Jonny MacGregor taking the lead while the FF Corse Ferrari was in the pits, the final 20 minutes of the race was all about pursuit – mainly from Tim Gray, Andy Schulz, and Lucky Khera, who had relieved Lee Frost in the Simon Green-run McLaren. Mark Cunningham relieved Mason of second place, but his Class 3 Porsche would have no answer to the three heavy-hitters coming up behind him. Tim Gray was the significant mover, taking Khera, Schulz, and forging a path for all three past Cunningham and then Mason, and, at that point, with the gap to the leading Taranis coming down, and a series of fastest laps being punched in, a win for the Praga, on paper, seemed possible.

It wasn’t to be though – Khera caught Schulz, but there was to be no more passing for a while, as the Safety Car was deployed once again, to recover Mason’s Ferrari and Ash Woodman’s SEAT, which had suffered a coming-together and were both beached in the gravel at Roberts chicane, and once the track went green again, there were barely a few laps to chalk up before the hour would elapse.

Andy Schulz’s Ferrari got the best of Lucky Khera’s McLaren on the restart, and didn’t fancy handing back third place to the Class 1 machine without a spirited fight, and with MacGregor’s Taranis now a full lap ahead of the rest of the field, an assault for the win was now infeasible.

So, local driver Jonny McGregor, in his self-developed and reliable Taranis, took the win, playing it strategically, and with no small amount of skill. The VR Motorsport Praga R1T was a lap down at the end, and, without the pit-stop shenanigans and subsequent penalty, Al Boulton and Tim Gray could well have been standing on the top step of the podium. There was another impressive showing from Frost and Khera, third overall in and Class 1 in the Simon Green Motorsport McLaren – these guys show up at a circuit near you most weekends, and take some trophies.

Paul Bailey and Andy Schulz’s Ferrari 488 took the Class 2 win, fourth overall, with the ALP Racing Saker of Alan Purbrick and David Brise second, after a race that involved a second, brief, pit stop, though these were split by the two Class 3 runners, Mark Cunningham finishing a lap ahead of the RAW Motorsport Ginetta G55 of Steve Burgess and Ben Dimmack.

Tim Docker topped Class 4, though it was a close-run thing, with the top three covered by less than a second at the flag, as, after bunching-up during the late Safety Car period, Guy Colclough’s SEAT got the jump on Paul Calladine’s Ginetta G50 on the penultimate lap. Behind them, series newcomers Michael Price and Peter Erceg had a good run in their scenery-liveried Porsche 718 Cayman, Moh Ritson continued his way forward in the TMS Ginetta G50 after Sarah Moore’s opening stint, the Team BRIT Aston Martin of Martyn Compton and Warren McKinlay steadily improved, and another new team, Rothery Racing, were next up, the pairing of Steve Rothery and Chris Whiteman getting to grips with endurance racing in a Peugeot 308.

Welcome returnee Daniel Woodard finished Class 5 uncontested in hIs Mini JCW after the demise on qualifying of Rob Bakers Smart 4/4, and bringing up the rear was Steve Harris, nine laps down after that early cutting-out issue.