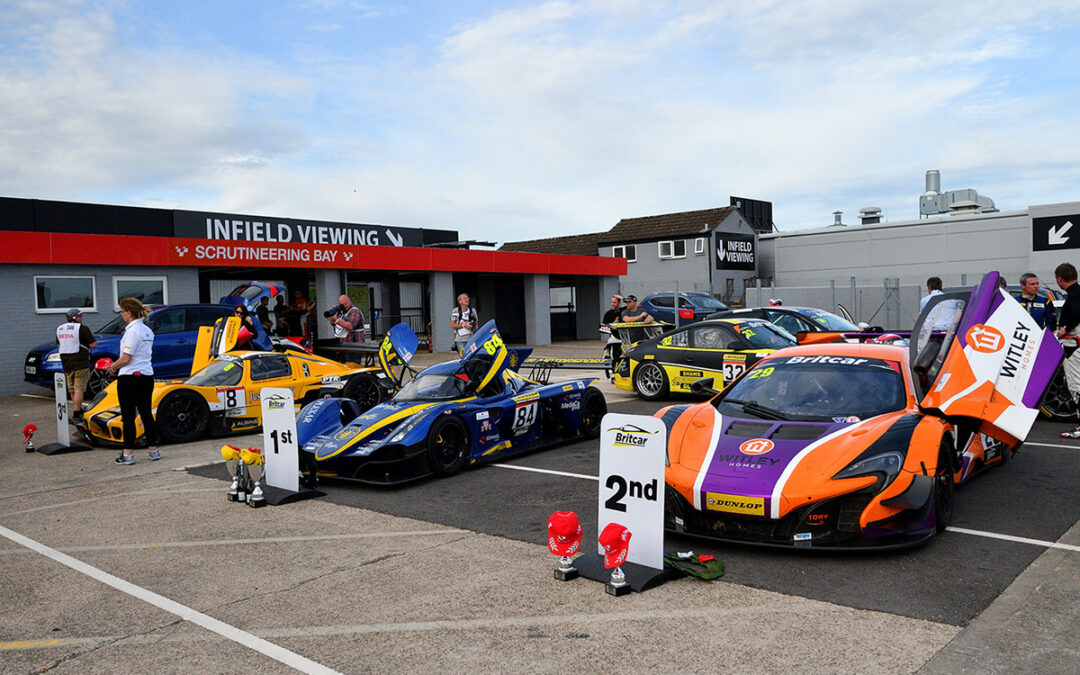 No Safety Cars, and a straight win for the Praga this time, as Tim Gray consolidated Al Boulton’s earlier solid work to take the lead from just after the pit stops to the chequered flag.

With the Mason/Wylie Ferrari 488 not in a fit state to take part, and Piers Reid’s BMW M3 removed from the grid with brake issues, the field took a bunched start, with pole-sitter Jonny MacGregor taking the lead in the Taranis, and Lucky Khera’s McLaren in pursuit, while Al Boulton’s Praga dropped a place, with a fast-starting Mark Cunningham behind.

Race 1 Class 5 winner Daniel Woodard’s race didn’t last long, as his Mini JCW was pitbound, and into retirement with a suspected CV joint failure after the first lap. It didn’t last much longer for Paul Bailey either, pitting the Ferrari 488 into retirement after just five laps, with a split coolant hose or holed radiator. The Ferrari had spun at Redgate on it’s own fluid, and had left a trail going into the corner, which gave those first to find it some lurid moments, and the whole field to compromise the line through the corner until the trail dried out.

Khera had been hounding MacGregor for the lead, the gap barely going above a quarter of a second, and on lap six moved to the front, but was unable to eke out an advantage. David Brise brought the Saker into the pits, with evidence of an off-circuit excursion, and Martin Byford was in too, the SEAT, heavily repaired after the Race 1 incident, now suffering gearbox issues. Class 4 saw some close racing again – Max Coates’ SEAT led the class, but in the mix, the Ginetta G50s of Paul Calladine and Moh Ritson (taking his first rolling start) were dicing, as were Steve Rothery’s Peugeot and Warren McKinlay’s Team BRIT Aston Martin. It wouldn’t end well for the Aston though, retiring with a throttle problem shortly into Martyn Compton’s stint. Moving through, too, was Steve Harris, having started his Saker from the back of the grid, and he was to share the drive in this race with JPR team-mate Paul Rose.

When the "pit window" opened, many elected to pit straight away, including lone driver Mark Cunningham, though Jonny MacGregor stayed out until the last knockings, maybe hoping to jump the field on the "overcut" (or whatever the opposite to the F1 undercut is).

When the field settled after the stops, Lee Frost held the lead established by Khera, though Tim Gray, now in the VR Motorsport Praga, was on the move, taking second place from MacGregor’s Taranis, then seizing the lead from Frost on the same lap, and from then on, it was a run to the flag for the top three, with MacGregor posting a personal best lap before easing off, and Frost’s solid run to second place earning hm the Sunoco Driver of the Day award.

With the leading overall positions settled, there were still places to be made in Class 4. Max Coates had handed the leading DAT Racing SEAT Cupra to Guy Colclough, but Graham Roberts was the star turn , having taken over Paul Calladine’s Ginetta G50, and was carving through, taking first Tim Docker’s Golf, and then overtaking Colclough’s SEAT as it took a spin under pressure at the Roberts chicane, leaving it vulnerable to Docker’s advances, and true to form, Docker, the King of the last lap lunge, seized second place just before the flag. Newcomers Michael Price and Peter Erceg proved worthy competitors in their Porsche Cayman, and Moh Ritson acquitted himself admirably in his first rolling start in the TMS Ginetta G50 shared with W-Series aspirant Sarah Moore, while Steve Rothery and Chris Whiteman improved through the day as they got to grips with the format, finding eight seconds a lap in their Peugeot 308 as the day progressed.

And there was a good result for JPR Motorsport at last, Steve Harris’ green #4 Saker, shared this time with Paul Rose steadily climbing up the order from the back of the grid to fifth overall, fourth in class, though atypically straggling at the back of the field was the ALP Racing Saker, after an unscheduled pit stop during David Brise’s stint, and a somewhat chaotic scheduled stop when Alan Purbrick took over, but, nevertheless, they still claimed the Class 2 win.

The Class 3 win, and a solid fourth place overall, went to the RAW Motorsport Ginetta G55 of Ben Dimmack and Steve Burgess, who had vied with Mark Cunningham, driving alone for the first time in the SG Racing Porsche 997, balancing speed with tyre conservation in a heroic performance which netted him the Britcar Driver of the Day award.