From: Newcastle U Lyme, Staffs

Hobbies & Interests (other than motorsport): Skiing is my real passion, I love cooking, travelling in Europe with the Motorhome and starting new businesses

Racing CV
I started racing rather late in life with my first races in 2016 in the 750 MC series in the Enduro and Roadsports series in red Seat Supercopa. I extended my race interests into other series like AMOC, MSV and then Britcar in May 2018. I had my first win in 2018 in the Enduro race 750 MC at Oulton Park. I had a number of podiums in 2017 and 2018 season. I enjoy the longer racing and the comraderie of racing with another driver as a team activity rather than short sprint races on my own.

Race car history: The car is a SEAT TCR MY2017 DSG and is chassis 202, configured for endurance racing. The car is a standard SEAT TCR, originally purchased by BAS Koeten in Holland and was raced very successfully under the green Kawasaki branding in 2017, winning 2 Creventic 24h rounds and placed 2nd and 3rd in its other 2 races.

Why did you choose to race with Britcar?
The racing format – Friday practice with Saturday racing
The racing is only Saturday and so not taking up the whole weekend
The car is well suited to this race series
The variety of cars – the different classes makes for good competition
The competitive element of Class 4 – competing against many of the same cars
The competitors / organizers – it’s a very "friendly / homely series" – I like the camaraderie of the fellow competitors
The racing is competitive but not usually so aggressive as to leading to too much damage 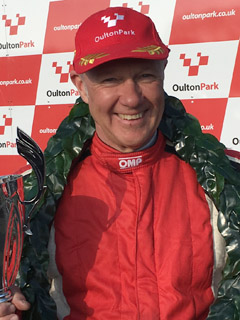