Racing CV
A late comer to motorsport, in 2017 I entered the Ginetta Junior Scholarship event, surprising myself by getting down to the cut off before the final six with absolutely no driving experience to my name.
I took part in the Ginetta Winter Series the following month (November) and thoroughly enjoyed my first competitive driving experience.
Entering my GCSE year in 2018, I made a conscious decision not to pursue a year in Ginetta Junior but instead apply for an adult race licence, achieving an International C by October last year. This involved almost every weekend racing in numerous championships including Britcar, GT Cup, AMOC and several others.
The highlight of 2018 was competing in the Creventic 12-hour race at Spa with Richard Neary, Ian Stinton and Team Abba Racing, finishing third in class and managing to get on the podium. My first time at Spa and competing in an Endurance race.

Why did you choose to race with Britcar? It is friendly / challenging and has good hospitality. The Friday testing and the one day race weekend is a great package. 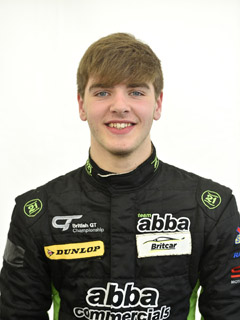