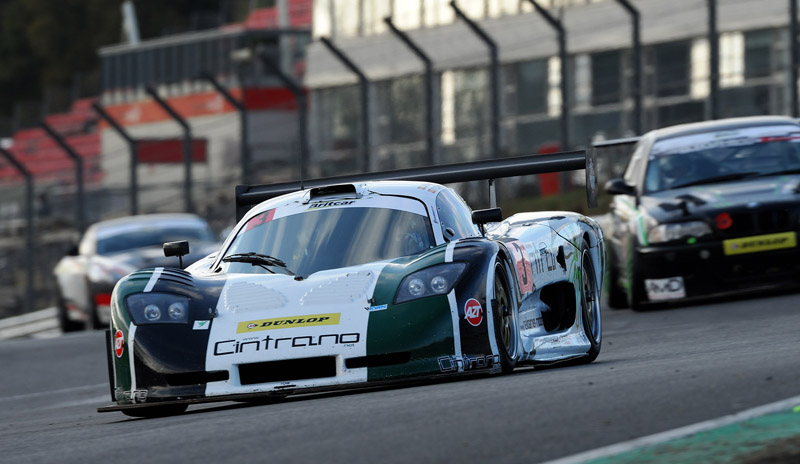 Morcillo and Moore – Magnificent Duel in the Dark
What a great end to the season – the Championship went down to the wire, and two professional drivers pitted all their considerable skills to make a thrilling end to a three-hour race. Javier Morcillo and Manuel Cintrano took the win in the Neil Garner-run Mosler MT900, just half a second ahead of the title-winning Tockwith Audi R8 of Nigel Moore and Phil Hanson. Respect was shown, and given, in equal measure.

Qualifying
With “Night Participation” qualifying having taken place on Saturday evening, it was the Sunday lunchtime session that would set the grid, but no sooner had the 50-minute session started than it was given a caution under the Safety Car, as the Johnny Mowlem/Bonamy Grimes Ferrari 458 spun on the Brabham Straight and kissed the pit wall. “Something’s wrong”, mused Mowlem, “in fifth gear, on a straight, to just snap like that”. The Ferrari crawled back round to the garages, where the FF Corse squad worked furiously to get it back out again.

As a forecast of things to come, the top of the timesheets was all about Moore and Morcillo, who traded places initially, before co-drivers Hanson and Cintrano took middle stints, leaving the pro-drivers to a final blast, and in the final five minutes Calum Lockie, in the FF Corse Ferrari 458 GT3, joined the fray as well, and the Ing Sport BMW Z4 of Kevin Clarke just bubbling below the top trio.

Moore claimed bragging rights at the end, just under half a second ahead of Morcillo, with Lockie a further second back, and Clarke a similar amount again. The third row was headed by the Class 3 Century Ginetta G50, the title-contender having the Class 2 Moss Motorsport BMW 1M alongside, with BGT racer Anna Walewska drafted in to assist the usual Moss/Howard partnership, with the team’s M3 on the row behind, piloted by Shaun Hollamby, Scott Adam and Andy Willmot, the only Class 4 contender. FF Corse did a sterling job of getting the #5 Ferrari 458 back out with just minutes to spare, but just minutes is all you need to get a few laps in on the Brands Hatch Indy circuit, and Johnny Mowlem’s few laps were good enough for ninth on the grid, splitting a group of Class 3 runners, which included the Team Hard Ginetta G55s of Darren Lewis/Daniel Wylie and Tom Knight/Dan Kirby, and the Chris Murphy/Matty George Aston Martin Vantage, which was atypically down the order, while mixing it with the GT/Production runners who were sharing the grid was Matt LeBreton, getting to grips with his newly acquired and sinister-liveried Ferrari 458, shared with the regular WDC crew of Rob Young and Neil Garnham, and The WRO Mini Cooper JCW, drivers Davey Birrell and Daniel Woodard exploring the limits of the upgraded machine.

Race
Two pace laps turned into a short Safety Car period before the race could get going, as poleman Moore had somehow slipped the Audi into the gravel at Clearways. Once extricated he cruised down the pit lane and joined the back of the pack, ready to mount a recovery drive once the caution was lifted. Sadly not making it to this point was the Jonny Packer Aston Martin Vantage, retiring after the pace laps with gearbox issues. Morcillo took the lead, and grew an advantage of nine seconds over Lockie’s Ferrari, though the Scot began to reel this back in, while Kevin Clarke, starting the Ing Sport BMW Z4, wasn’t able to match the pace of the leaders, and was under threat from a fast-starting Johnny Mowlem, who himself had Nigel Moore coming up fast behind, after scything through the back markers. Early pit stops saw a quick in-an-out for Shaun Hollamby’s BMW, responding to a black-and-orange warning, and Daniel Woodard’s Mini, for some repairs and adjustments. Matty George had quickly hauled the Whitebridge Aston up from its atypically low starting position, and was now on terms for the Class 3 lead with Jacob Mathiasen’s Ginetta G55, but a clash with Tom Howard’s BMW 1M saw both the Aston and the BMW crawl line-astern into the pit lane with damage; both were pushed back into their garages, with the Aston returning to the race after repairs, but the BMW finished for the day, leaving co-drivers Mike Moss and Anna Walewska jobless.

Coming up to quarter-distance, Nigel Moore had by now taken both Mowlem and Clarke, and was in pursuit of Lockie, who had by now reeled in Morcillo, and was less than half a second off the Mosler. The Ferrari lost seven seconds in a grassy moment at Clearways though, forced in avoidance of Dan Kirby’s Team Hard Ginetta G55. Morcillo pitted a few minutes later, though, handing the Mosler over to Manuel Cintrano, and Lockie set about building an advantage, doing so at a crucial stage of the about-to-finish GT/Production race; Ed Moore and Dan Stringfellow were dicing for second place on what was to be their last lap, and were interrupted by Lockie, impatient to get through. The ensuing crash saw a cascade of polystyrene, foam and car components fly into the air, and left the BMW and Ginetta stricken, and the Ferrari damaged but continuing seemingly unabated. The Safety Car was deployed immediately, just about perfect timing for the first of the two mandatory pit stops.

David Mason took over the #1 Ferrari from Lockie, and once the track went green again, maintained the lead for just a few laps, before Phil Hanson, who had relieved Moore in the Audi, took control. Mason slipped down the order, being passed by Bonamy Grimes and Ian Lawson, though they all had a lap on Cintrano, who had a quick spin coming out of Graham Hill Bend. The colourful race of the #57 Moss Motorsport BMW M3 continued, Scott Adam attracting the attention of the officials when ignoring a red light at the pit exit – an eight-second stop/go penalty was the punishment.

At the halfway stage, Hanson was nearly three-quarters of a minute ahead of the impressive Grimes, who’s Ferrari had Ian Lawson’s BMW Z4 on its tail, with Cintrano now worked his way back up to fourth, in front of Mason, and the two Team Hard Ginettas, Daniel Wylie ahead of Tom Knight. By 100 laps, Hanson had lapped the whole field – after the car started stone last; once in the guards van, now in the vanguard.

With 70 minutes to go, it was unfortunate that Davey Birrell spun the Woodard Mini into the gravel on the outside of Paddock, and the Safety Car was deployed once more. An opportune time for the second mandatory pit stop, and significantly, The Mosler double-stopped for a 25-litre fill during the caution, with Morcillo taking over for a final stint, but would he have to splash and dash later? Lawson pitted the Z4 from second place after the caution was lifted, then both Hanson and Grimes, ignoring the earlier opportunity, stuck rigidly to plan, and came in with little more than a quarter of the race left to run, handing back to Mowlem and Grimes respectively. Mason left it a little later still, and with Lockie installed in the GT3 Ferrari 458, we had the faster drivers in a thrash to the flag. But it was the battle at the front that drew the attention – a 17 second gap between Morcillo and Moore became 15, then 13, and Moore punched in a fastest lap to ensure a further valuable point was scored. The gap was down to six seconds when the battling pair came across the #21 Team Hard Ginetta, which had a spin and delayed Morcillo’s Mosler, reducing Moore’s deficit to just half a second, with 10 minutes to go. The most nail-biting 10 minutes in Britcar history, possibly British motorsport history. The wide-bodied Mosler was even wider as Morcillo exacted a legitimate defence; Moore got alongside more than a few times – on the run up from Paddock and round the outside at Druids, then out of Surtees and around Clearways, but always the grunt of the LS7 gave the Mosler just a smidgeon of leeway on the straight, for 13 laps they diced, with Morcillo taking the flag just half a second to the good after 192 laps, a fitting end to a great year of racing, and the points accrued by the Tockwith duo enough to claim the 2016 Britcar Dunlop Endurance Championship title.

“This was the race of my life” smiled Javier Morcillo, “you may think we battled for 10 minutes but in fact it was 45 minutes, because the gap was coming down right from the Audi’s last pit stop. This was the race of a heart attack and had me fighting for 45 exhausting minutes. We touched a couple of times – you get this in close racing – but there was never any intent. We have won several times, but this is the most beautiful race I have ever played in. For me Brands is a special place, and a win here is emotional, especially in front of my young son. Thank you to all who made it possible for the LAN, the jumbotron from Neil Garner and the good work of Manuel Cintrano in this race”. Indeed, Cintrano had been pivotal in this success; it was clear from his lap times in free practice on Saturday, and through the GT/Production race, that the Spanish gentleman driver had upped his game for this event. Added to this Morcillo’s performance was all the more impressive, since the Mosler incurred a considerably damaged wheel in the late-race clash with the #21 Ginetta.

So, Tockwith took second place, and once the points and dropped scores were tallied-up, Hanson and Moore were declared overall and Class 1 champions by the narrowest of margins. Ian Lawson and Kevin Clarke took third overall in the Ing Sport BMW Z4 – it went right for them in a consistent and understated performance, whilst Johnny Mowlem and Bonamy Grimes made the best of their re-fettled Ferrari 458 to come home fourth, and claim the Class 2 victory, ahead of Class 1 stablemates Calum Lockie and David Mason.

Sixth overall, and the Class 4 winner, despite various penalties and warnings, was the Moss Motorsport BMW E46, a superb and well-matched performance from Shaun Hollamby, Scott Adam and Andy Willmot, while championship runners-up Steve Fresle and Jacob Mathiassen, in the Century Motorsport Ginetta G55, bagged the top Class 3 points, but not the class win, which went to the Team Hard invitation entry Ginetta G55 of Darren Lewis and Daniel Wylie, with its sister car, the pit-visiting #21 machine of Tom Knight and Dan Kirby third in class.

The WDC racing trio of Matt LeBreton, Rob Young and Neil Garnham got to grips with LeBreton’s newly acquired Ferrari 458 to finish second in Class 2, while Davey Birrell and Daniel Woodard, even though their Mini had to be extricated from the gravel mid-way, had done enough to be classified as Class 5 winners.