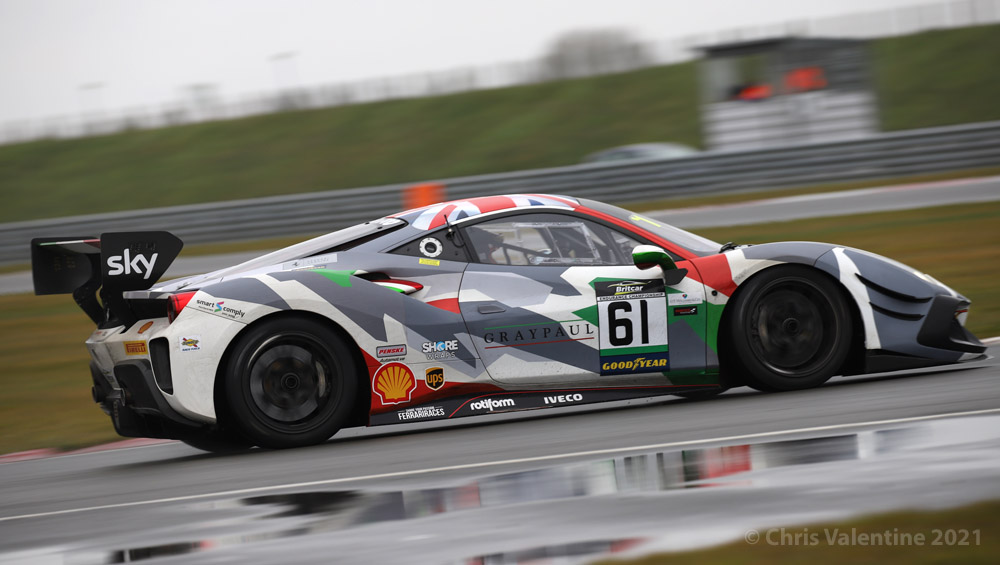 John Dhillon, in the Invitation entry Scott Sport Ferrari 488 Challenge, took a convincing win in a rain-blighted Race 1, his Class 2 machine having the legs of the nervous Pragas and getting the jump on the regular Britcar Class 1 entrants during a caution, with Jamie Stanley’s stunning second stint in the Lamborghini Huracan started by John Seale running out of time to snatch victory.

Started under the Safety Car to ensure a single-file start in the treacherous conditions, it was Richard Wheeler’s Nissan that led away from pole, with Bon Grimes Ferrari 458 just half a second adrift, and John Seale spun the Lamborghini at Palmers, dropping to a midfield position. Wheeler and Grimes enjoyed some side-by-side action before the Le Mans-inspired am-driver got the Ferrari ahead and began to pull out some semblance of a lead. A wide line saw Wheeler lose out to Dhillon’s predatory Ferrari, by which time Grimes was seven seconds up the road. Martin Byford, star of free practice in the EDF Cupra, was an impressive fourth, fending off an on-form Bobby Trundley in the Team BRIT Aston Martin for the Class 4 lead, and a quick spin by Chris Goddards’s Ferrari preceded the pit window opening; Grimes, Wheeler and Seale were quick to take advantage, leaving Dhillon, as a lone driver, free rein to stay out to a more suitable moment.

And that suitable moment came just a few minutes later – Jem Hepworth’s Praga had spun and stalled at Agostini, calling for the Safety Car to be deployed, and it was sadly wrong time, and now wrong place, for Johnny Mowlem, Danny Harrison and Jamie Stanley, who had taken over the erstwhile leading trio of cars. Stuck in the Safety Car crocodile, they lost the best part of a lap under those that stopped under the caution, which constituted the rest of the field.

The caution was lifted with 24 minutes of the race left, and Dhillon’s Ferrari was now 26 seconds ahead of Ash Woodman, consolidating Byford’s earlier great work in the BPM Cupra, Aaron Morgan’s Team BRIT Aston, and big-time losers Mowlem, Harrison and Stanley. But these three would now stamp their class authority on the Class 4 pair, with the rain now abating and the track beginning to come back to a power advantage. Stanley was the prime mover, making short work of those ahead, and by the time he relieved Woodman of second place, he had a minute to make up on Dhillon’s lead, with 10 minutes of the race left. He whittled it down, but time ran out, and at the flag, the Lamborghini trailed the Ferrari by just under 22 seconds. Aside from a slight tangle with a Praga while chasing the lead, this had been an exemplary drive from Dhillon, in his return to Britcar after many, many years. 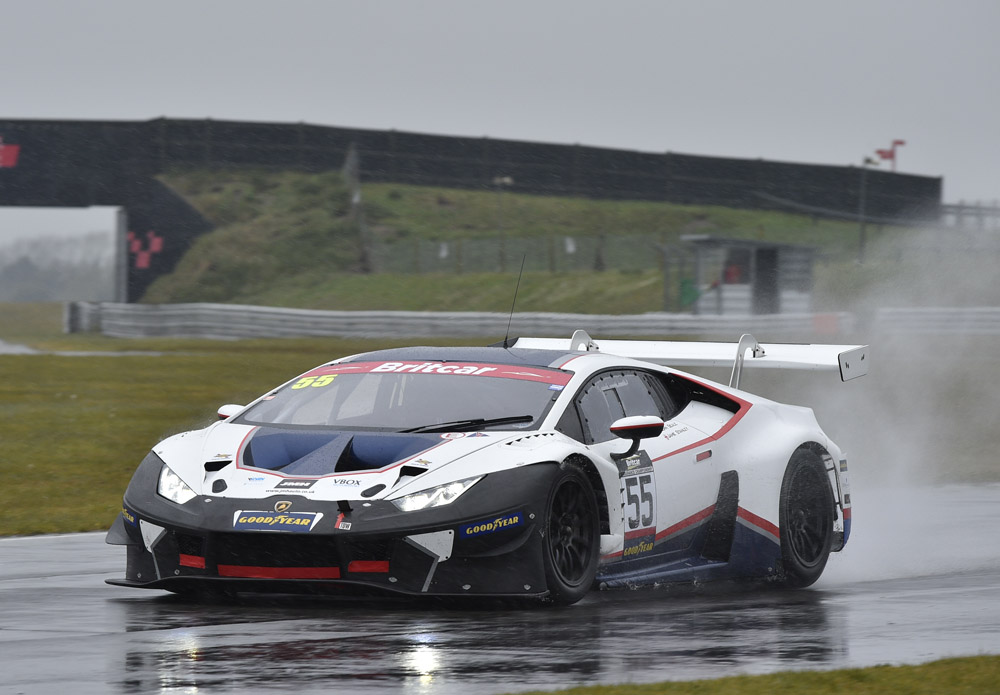 That opportune Safety Car period really did upset the order – Dhillon retained his lead after his stop, with Ash Woodman and Aaron Morgan, replacing Byford and Trundley in the leading Class 4 machines, retained their places behind the leader, with a minute gap back to Mowlem, who had been visibly impatient in the Ferrari in the Safety Car train. It took Stanley four laps to clear the four cars keeping him from a shot at the lead, and Mowlem and Harrison battled to the bitter end in third and fourth, less than a second separating the FF Corse Ferrari and the Fox Transport Nissan at the flag, with Mowlem consolidating Grimes’ earlier stint to claim the Class 3 victory.

Will Powell, in the Motus One McLaren GT3 started by Dave Scaramanga, was taking no prisoners, seizing fifth place in the Endurance category, and the final Class 1 podium spot, from Ash Woodman’s Cupra by just a quarter of a second as they crossed the line. This was a terrific result for the EDF-run Cupra team, the trouble-free Class 4 win being redemption for a somewhat dismal start to the season, and the Team BRIT Aston Martin of Trundley and Morgan, another great performer in the conditions, was a worthy class runner-up, ahead of lone driver Peter Erceg’s Porsche Cayman, and the Greystone McLaren of Andrey Borodin and Ed Pead. It was a packed Class 4, and the TCR machines filled the next group of placings, with the Alex Day/Will Foster Cupra, Tim Docker in an unfamiliar Cupra (instead of his damaged Golf), Jonathan Beeson’s Golf, the Cupra of former Porsche exponents Nick Hull / Richard Avery, ahead of the Newbarn Racing Jaguar F-Type of brothers Callum and Adam Thompson. This had been a turning point for the team, with a new engine, and a replacement injector delivered and fitted just before free practice, a race finish was fulfilment for the enthusiastic squad. 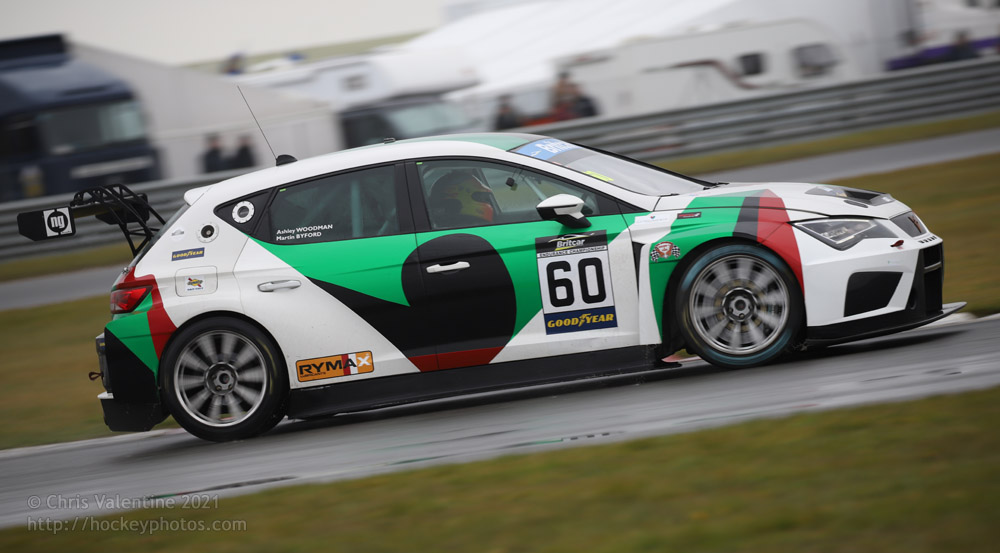 Masters of Class 4 were Ash Woodman and Martin Byford

The Class 3 finishers mingled with the Class 4 runners – with the Mowlem/Grimes Ferrari 488 way ahead, the Ferrari 458 of Chris Goddard and Charlie Hollings was runner-up, a lap down, with third-placed Marcus Fothergill and Dave Benett’s Porsche 991 a further lap adrift, though Fothergill had enjoyed some side-by-side action with Erceg’s Cayman in his stint. The Woodrow BMWs couldn’t show their best in the conditions, the Nathan Wells / Mark Steward E46 finishing behind the 1M started by Matty Evans, though a late charge by Kevin Clarke, despite claiming that the car was "almost impossible to drive in the conditions", saw him finish just half a second behind Folhergill’s Porsche at the flag, just missing out on the Class podium.

Sadly, the Hugo Cook / Sacha Kakad Audi TCR failed to make the flag, pitting with a holed radiator just 12 minutes from the end.