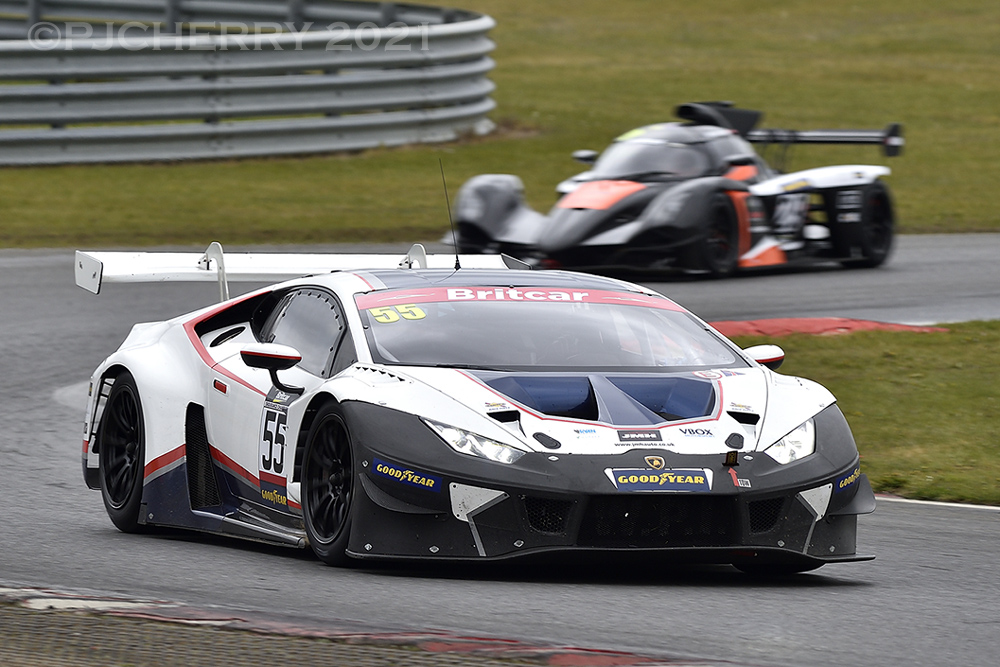 With weather conditions improved from the earlier rain-blighted Race 1, the field lined up based on second-best qualifying times, and it was Phil Quaife in the Race 1-winning Scott Sport Ferrari 488, from the third row, getting the jump on the rest, taking the lead from Jon Seale’s Lamborghini, and crossing the line for the first time a full seven seconds ahead of the field, which now was headed by Bon Grimes’ pole-sitting 458. Quaife was virtually doubling his lead every lap, up to 23 seconds by lap three, and Wheeler, taking the first stint in the Nissan GT3, was seriously troubling Grimes for second place. The Nissan made it stick third time around, and John Seale also now made an impression on the Class 3 Ferrari, relieving it of third place. Also on the move was Charlie Holliings in the RNR Ferrari 458, taking Grimes for the Class 3 lead, and Ed Pead, contesting the Class 4 lead in the Greystone McLaren GT4 with Martin Byford, who was visibly giving it everything in the EDF Cupra TCR.
The Pragas were now coming into play in the improving conditions, and split the Endurance frontrunners. Some close racing saw Wheeler’s Nissan tangle with the Praga of Richard Wells; the Nissan had a spin, but continued, letting Charlie Holling’s Ferrari through to second place, but the Praga was stranded off-track and the Safety Car was deployed. There were just a few minutes before the pit window opened, and once that point came, there was an almighty dash for the pits, leaving just Hollings, now in the lead, Alex Day’s Cupra and Nick Hull’s similar car out on track. An unfortunate pitlane incident eliminated Jonathan Beeson’s TCR machine, the BMW E46 of Wells/Steward, and also involved Jack Fabby’s stationary Praga. Meanwhile the Safety Car continued to circulate until there were just under 16 minutes of the race left to run, exercising a complicated wave-by to get the front-runners in order, line astern.

At the head of the queue was the Scott Sport Ferrari with John Dhillon now installed, in front of Danny Harrison, having relieved Wheeler in the Nissan, Johnny Mowlem in the Ferrari started by Bon Grimes, Jamie Stanley’s Lamborghini, Class 4 leaders Andrey Borodin (McLaren) and Ash Woodman (Cupra), and the SG Racing Porsche of Peter Cunningham, having taken over from son Mark. 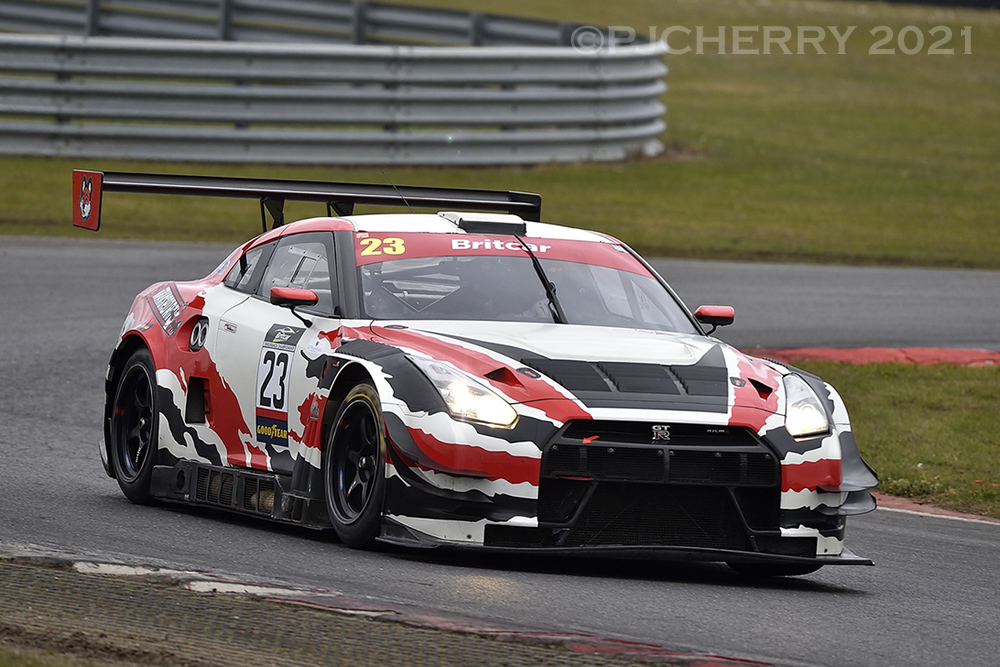 Once the course went green, Harrison wasted no time taking the lead from Dhillon, and Stanley was soon behind him. Harrison made it difficult, despite the ill-handling of the Nissan, probably due to the earlier tangle; Stanley tried it every which way, eventually unconventionally making it stick around the outside of Agostini, and while he went about consolidating his lead, there was considerable movement through the placings behind; Will Powell was once again carving through the field in the Motus One McLaren started by Dave Scaramanga. Matty Evans was atoning in the previously under-performing BMW 1M, battling with Peter Cunningham for the final Class 3 podium spot, and Bobby Trundley, in the Team BRIT Aston Martin started by Aaron Morgan, has his eyes firmly set on the Class 4 prize.

Jamie Stanley crossed the line 21 seconds ahead of Harrison, with some differing views of the race: "That was the only time all weekend I saw a clear track, so I gave it full beans" said Stanley, while Harrison admitted "That was a tough race, I had little control, the steering wasn’t exactly in a straight line".

The leading Praga split the top three, Johnny Mowlem just hanging on to the final Endurance overall podium place and having to trawl his minefield of experience to stay ahead of Will Powell’s more powerful McLaren, which was fourth, in front of Dhillon’s Ferrari. A parade of Pragas separated the rest of the Endurance field, with the Chris Goddard/Charlie Hollings Ferrari 458 second in Class 3, with the Woodrow BMW 1M claiming third after Matty Evans made a significant contribution to Kevin Clarke’s opening stint. Mark and Peter Cunningham made the best they could of the SG Racing Porsche 997, missing the first race while they effected repairs caused during an off in qualifying, and the Porsche 991 of Dave Benett and Marcus Fothergill was fifth in class. 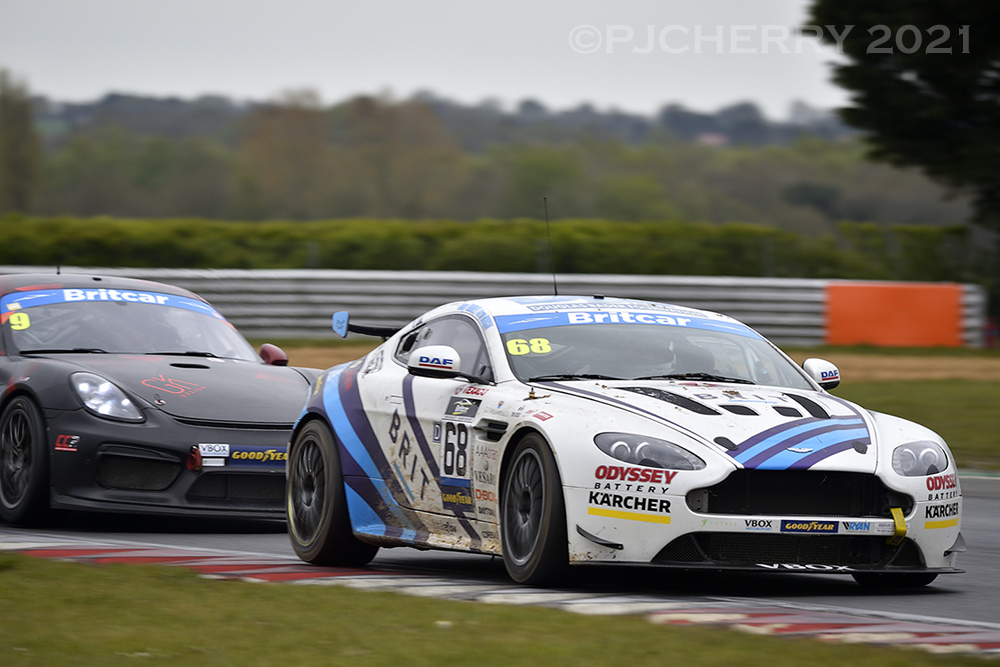 In Class 4, the amazing Bobby Trundley took the Team BRIT Aston to the win after a final push, ahead of erstwhile front runners EDF, with Ash Woodman admitting "nothing I could do about it, Bobby was on fire today". Nevertheless, a great haul of points and trophies for the team, with Martin Byford adding Driver of the Day to his trophies. Peter Erceg kept it all together in his Porsche Cayman to claim third in class, and the following TCR machines were split-up by the McLaren of Andrey Borodin/Ed Pead, with Hugo Cook and Sacha Kakad showing what could be achieved in the repaired Simpson Audi, and the Cupras of Tim Docker, Alex Day/Will Foster, and Nick Hull/Richard Avery, while the Newbarn Jaguar F-Type had simple electronic glitches which stymied the efforts of Adam and Callum Thompson.