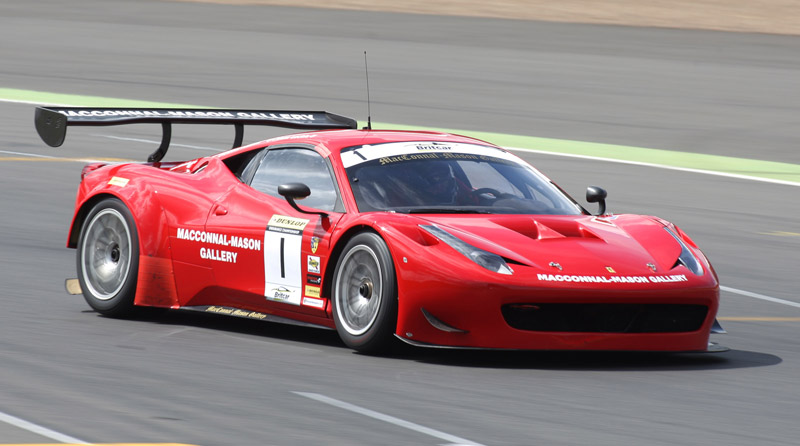 Race 1 – Forza FF Corse
With some top-line Endurance competitors straying over, the usual status was going to be turned about, at least for the first of the two 50-minute encounters. Calum Lockie had served notice in qualifying that this was going to be his day in the Ferrari 458 GT3 he shares with David Mason, and indeed, he had posted a time nearly three seconds ahead of FF Corse stablemate Bonamy Grimes in a similar Challenge-spec machine.

While Lockie sped away at the start, it was one of the regulars that got the jump on rolling-start virgin Grimes; Jack Wright, in the Willmott Racing Porsche 997, came through from the second row, and held on for several laps before the Ferrari got into its stride and reclaimed second place. Lockie was streaking ahead now, and as early as lap 15 had lapped the entire field – and he needed to; given David Mason’s potential pace and upcoming stint length, he would need to put the best part of two laps on the opposition to be ahead at the flag.

A very early stop for Rob Hudson to hand over the Geoff Steel Racing BMW E46 to the hard-working Adriano Medeiros (” I misread the pit board” he admitted) and Jack Wright, who had slipped back in the Porsche 997 (“the car started misfiring, so I came in , and it seemed the right time to hand over to Colin Wilmott”) attracted the attention of the men in serious trousers, who applied post-race penalties to both cars, dropping them down the final finishing order due to incorrect stint lengths.

Once the mandatory pit stops were taken, and the field settled for a run to the flag, Jonny Cocker was particularly impressive in the Whitebridge Aston Martin Vantage taken over from Chris Murphy, taking both Porsches of Marcus Fothergill and Peter Challis to claim the Class 3 lead, but it was the battle at the front that was riveting, as Charlie Hollings, in the Ferrari 458 previously piloted by Bonamy Grimes, was tearing chunks out of David Mason’s original lead of just under two laps, inherited from first-stinter Lockie. The gap decreased by five seconds every tour, and it was nip and tuck as to who would see the chequered flag first, but it was Mason, just 0.384 ahead of his FF Corse stablemate, after 43 laps.

The hotly-contested Class 3GT went to Cocker and Murphy, the Aston finishing just 0.155 ahead of lone-driver Peter Challis in the Arrowpak Porsche, with the similar Benett/Fothergill machine only 0.670 behind, a closer class finish you couldn’t ask for! A little further down the order, Rob Young had double-duties for the WDC Racing team, finishing both fourth and fifth in class, sharing the team’s Ferrari 360 with Matt Le Bretton, and the BMW GT4 with Neil Garnham, while Brad and Rick Nevison steered the Track Focused Porsche Cayman to sixth in the category.

It was a costly error for the Hudson/Medeiros BMW M3, as they lost-out on the Class 1P win, handing it to Mike Moss and David Cooper’s ahead of Del Shelton’s older E36 variant, with lone-driver Martin Parsons finishing fourth in class in the Track Torque Racing SEAT Supercopa.

It was a great debut for Team Lizard/Abbey Motors – Steve Burke and Mark Gillham bagged the Class 2P honours in their Nissan 350Z.

Race 2 – Lunch is for Wimps
With the meeting running inexplicably late, the organisers shortened the lunch break to bring it back on time, meaning the GT & Production protagonists had precious little time before being summoned back on track again, leaving the Britcar hospitality suite littered with half-eaten and barely-touched plates of Chili con Carne.

No Lockie/Mason Ferrari this time, the second race was never on their agenda, and Peter Challis’s Porsche never made it out either, leaving Bonamy Grimes to take the lead in the FF Corse Ferrari 458 Challenge as the red lights went out, but he was soon in the pits with a problem, lack of gears being attributed to an electrical issue that forced them into immediate retirement. This left Jack Wright’s Porsche in the lead, but Mike Moss was coming up hard and fast – he’d left his lunch steaming on a plate and was in no mood to negotiate, the BMW taking the top spot, and drawing out a gap. The Young/Garnham BMW GT4 was also on the move, taking second place from the Porsche, which was setting erratic lap times, a couple of laps later.

The Moss/Cooper pairing would hang on to the lead until the end – aside from the pit-stop period, when Del Shelton’s E36 headed the field for a few laps – despite being pursued in the closing stages by Marcus Fothergill, who sniffed success in the Bespoke Cars Porsche 997, but was keeping a close eye on his mirrors too, as Jonny Cocker once again excelled in the Whitebridge Aston, consolidating the steady early work by Chris Murphy, and was just two seconds behind the black Porsche as the flag fell. No mistakes for Rob Hudson and Adriano Medeiros this time, the Geoff Steel-run BMW finishing just ahead of stablemate Del Shelton, completing the Class 1P podium.

Sadly not making the flag were the WDC Racing Ferrari 360, and Martin Parsons’ SEAT Supercopa.