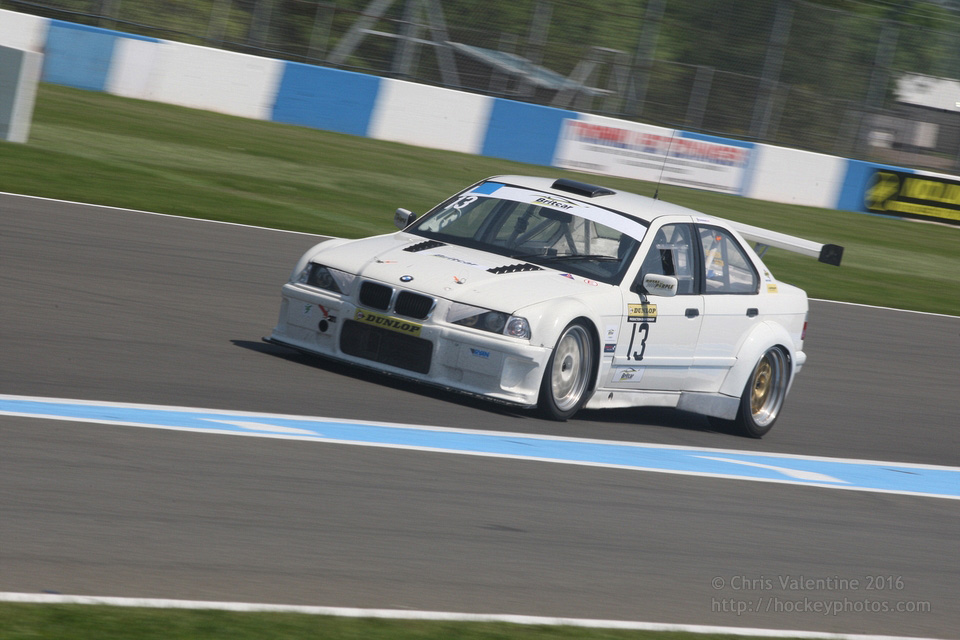 A distinct chill in the Donington air greeted the drivers for the second set of races of the Dunlop GT & Production Championship on Sunday.

Britcar welcomed to the grid Andy Robinson’s Australian Ford Falcon V8, an echo of the Chevron V8s that made an appearance in Britcar last year.
Also new to us are the Scottish father and son pairing of Lance and Alasdair in a Porsche Cayman 3.4, returning to racing after a 7-year gap. And brothers Barry and Roger McMahon bring their Alfa Romeo 156 from the BRSCC Alfa Championship.

Virtually every car appeared to be having issues during the morning qualifying session. Mike Moss’ BMW, that had performed so well the day before in Endurance, was having misfire problems, but worse fate befell the Porsche Boxster of Fareed Ali – itself a spare car after a crash knocked out the team’s Cayman GT4 on Friday – where metal fragments in the oil indicated a lunched engine and no racing for the frustrated Torontonian driver.

Jonny Macgregor’s impressive Taranis, after work to address grounding issues, lead the pack putting in a 1:31.313 on his very last lap ahead of the two Sakers in GP, while Andy Robinson headed the Production classes in the Falcon V8 until a late quick lap by the Moss Motorsport BMW grabbed their pole slot.

Race 1 starts with a clean getaway from the lights and the Taranis maintains its lead ahead of the two Sakers through Redgate. The Aston gets past the Alfa but chooses to pit at the end of the first lap. The Moss Motorsport is showing significant pace in 4th ahead of the all-black Porsche 997 Cup.

By lap 7 Paul Rose has closed the gap to team mate Steve Harris’ Saker as MacGregor starts to pull away up front, while father Lance Gauld is pushing the Cayman to 7th.

Lap 10 and the Taranis has built a 35 second margin ahead of the Sakers, with a similar gap between the 4th place BMW and chasing Porsche. Andy Robinson is setting very consistent 1:41 lap times in the V8 Ford.

The #69 Porsche is the next to pit, letting the Ford Falcon take 5th; the Alfa comes in as the Porsche leaves and then son Alasdair takes over from dad Lance in the Microsoft-sponsored purple and white Cayman.

The Geoff Steel-run E36 BMW of Dan Shelton is right up behind Martin Parsons’ Seat Supercopa as the cars complete their 14th lap. Steve Harris pits his Saker with the team boss carefully timing the stop.

Tom Howard exits the #57 BMW, today’s stops somewhat calmer than those in yesterday’s Endurance race with no need for tyres or fuel. Having said that, the black Fothergill 997 Porsche pits again needing a front left tyre change.

After 19 laps the leading Taranis is in, followed by Paul Rose’s 2nd-placed Saker but with no mistakes or delays, the leading positions are maintained. The Seat and #13 BMW also pit together, teams frantically cleaning a layer of dead flies from their screens.

Having taken overall third, the 00 Ford Falcon is the last car to take its compulsory stop and although a set of tyres have been readied it looks like the team are going to continue with those currently fitted.

Mike Moss has spun off in the #57 BMW at Goddards but after a short pause is away into the pit lane with the front right tyre rubbing and smoking, apparently not caused by this particular incident. The team push the car it into the garage for hasty attention with less than 10 minutes left but meanwhile MacGregor posts a new fastest lap of 1:32.183 as he pulls further ahead of Paul Rose in the quicker Saker.

The Fothergill Porsche manages to grab 4th ahead of the Robinson Falcon with only handful of laps remaining and with the Ford apparently slowing it’s not likely he’ll re-gain the place.

Marcus Fothergill said afterwards "I felt the [Porsche’s] tyre go in the Melbourne Loop so had just enough time to radio in for a tyre change".
Dave Benett, "I was gauging my race against the black BMW but when he went in [at Goddards] I could start to feel the Falcon breathing down my neck.”

Having developed a fairly comfortable lead ahead of Rose’s Saker, Jonny MacGregor "the tyres started to go off about half way through so I had to back off a bit" – although that didn’t seem to stop him posting his fastest laps towards the end.

Missing from the grid for Race 2 is the Alfa having suffered a suspension bolt failure but the team continue to work on the car.

This time as the lights go out the #48 Saker is alongside the Taranis into Redgate but the Taranis’ power margin pushes MacGregor into the lead down Craners.

By lap 4 the Moss BMW is up to 7th having made a pit lane start while a battle develops between the all-black Porsche and Robinson’s Ford Falcon for 4th behind the second Saker of Steve Harris. Del Shelton is on a charge in the white BMW E46 head of the rest of the pack in tight formation.

By lap 5 however, the Fothergill Porsche is slowing – and smoking from the offside rear. Slowing to white flag pace, the car enters the pit land with the fat Dunlop barely in place on the rim and the team scrambles to the car, gas bottles in tow.

A gravelly exit takes the Moss/Howard/Bird BMW out of the picture with Tom Howard at the wheel – apparently down to a suspension failure but Tom is fine.

So the Falcon is safe – for now – in overall 4th but the Moss Motorsport BMW is starting to grow in Andy Robinson’s mirrors. 9 laps in and Chris Murphy is again the first to take a scheduled pitstop in the Aston V8 Vantage, nearly all cars burdened with success stop times, from 90 to
110 seconds for this car.

MacGregor pits the Taranis 16 laps in shortly followed by Steve Harris in the #47 Saker leaving Paul Rose’s Saker to grab the lead.

Martin Parson’s Seat Leon seems to be bearing considerable screen-borne deceased invertebrates as aggressive scrubbing commences as soon as the car comes to a halt at their garage.

Now 19 laps in and the leading Saker pits but with less than 70 seconds to the Taranis its likely Rose will lose his lead and sure enough MacGregor is through to retake P1.

The Gauld Porsche Cayman makes a very brief unscheduled stop with 10 minutes remaining with dad Lance at the wheel and likely gremlins in the road car-sourced PDK gearbox – overheating of the diff known to be an issue – or PSM stability system.

With less than 7 minutes remaining, the McMahon brothers’ Alfa suddenly appears on the timing board, the team taking the opportunity to test the car prior to the final race of the day.

But at the flag it’s the Taranis again that wins overall – grabbing a cheeky fastest lap with at the end – and the Sakers of Paul Rose and Steve Harris 2nd and third. Andy Robinson 4th overall in the fastest Production class car.

Mike Moss’s BMW is recovered to the pit lane with the suspension failure that led to Tom Howard being unable to prevent the car landing in the gravel, but the team are unable to fix the wayward shock absorber; but the McMahon brothers were able to field the Alfa as part of the diminished Race 3 grid.

And the last race of the weekend cannot be more of a contrast to the first two with both Sakers running into trouble – Paul Roses’ just two laps in – leaving the Taranis to run away with its third win of the day, posting a blistering 1:31.599 fastest lap in the process. The matt black Porsche of Fothergill and Benett probably isn’t the most pleasant place to be with late afternoon temperatures reaching mid 20s centigrade, save for an overall 2nd place ahead of the Ford Falcon in third at the flag.

Martin Parsons’ Seat Supercopa beats the Gauld and Gauld Porsche Cayman but both teams are happy to land Production class pots in today’s racing – although Alasdair Gauld admits afterwards that under- fuelling was the cause of their DNF in Race 2.

The next 2 races in the Dunlop GT & Production Championship take place at Thruxton on Saturday 2nd July.