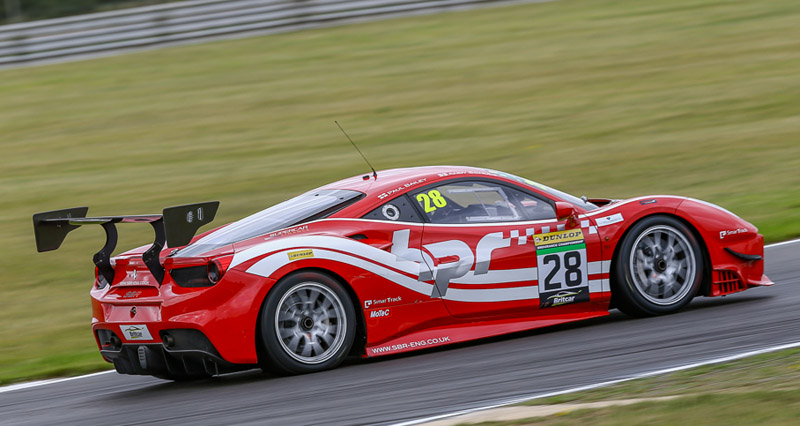 This late-summer break is an opportune time to review the Britcar Endurance points standings, as we go into the four remaining rounds, with the overall top three all in-line, at least, for a Class title, but with the big prize still undetermined.

Top of the list currently, with 298 points, is the Class 2 Ferrari 488 of Paul Bailey and Andy Schulz. They have achieved this through – or perhaps despite – rigidly sticking to a pre-determined plan, no matter what. When those around them have played the conditions, the weather, the Safety Cars, it has always been pro-driver Schulz bagging a slot on the first two rows of the grid, with Bailey holding it steady on a full tank in the opening stint, with no unnecessary heroics, pitting at the earliest regulatory time, then Schulz in for 36 minutes of blistering pursuit, of that all-important fastest lap, and the win. The pair, successful in Britcar several seasons ago, and now re-united after a year break, have had several overall wins this season, and complement each-other’s styles – whilst Schulz is the consummate pro, Bailey isn’t exactly a rank amateur, lest we forget, the holder of several titles, and with over 10 years racing experience. Any realistic chance of taking class points away from them would come from the ALP Racing Saker of Alan Purbrick and David Brise, who in the last few races have atoned for a disappointing start to the season, reflected in their points tally.

Lone driver Tim Docker heads Class 4 in his VW Golf, and is 19 points adrift of the top spot. The Midlands businessman, keen on cycling, fitness and performance, relishes the lone-driving endurance format, and is renowned for upping the ante towards the end of a one-hour race, the "king of the last lap lunge". He missed out on the overall title last year, by changing car, and class, mid-season, but still accruing more championship points than any other competitor.

Tim has clearly done the maths, and his situation is perhaps best summed-up in his own words: "With 12 races, 12 finishes and 10 podiums including two class wins behind us we’re sitting on a 98-point lead in Class 4 and running second in the overall championship. Another 31 points or any race finish in front of Paul Calladine’s Ginetta would secure the Class 4 title. The overall championship is not entirely in our own hands; to have any realistic chance of catching Paul Bailey and Andy Schulz we will need to maintain our reliability, deliver consistent podiums and hope they’re unable to match our points tally in the last four races. It’s been a great season so far for me and the team at Maximum Motorsport. The goal at the outset was to win Class 4 and that remains our absolute focus. If the overall championship comes our way that will be an incredible bonus."

Father and son duo Peter and Mark Cunningham have been stalwarts of the various incarnations of Britcar from the early days, and it’s not an overstatement that 2019 has been just about the pinnacle of their Britcar careers – two Driver of the Day awards for Mark, and one for Peter speak volumes about their performances in the Class 3 Porsche run by tight family team SG Racing. They have always been at the sharp end of any class they have raced in, and over the past few seasons have taken the fight to the Ginettas, but this year it has been some well-driven Porsches they have had to contend with, and, despite business commitments and budgets constraining testing, the pair have raised their game accordingly – Mark’s storming starts have been a highlight this season, and Peter’s response to pressure in the closing laps, last time out at Snetterton, was phenomenal. With 266 points on the board, they should claim the Class 3 crown, though the Valluga Porsche 991, in which Ian Humphries stealthily took to an overall win at Oulton Park in June, might queer the pitch. Mark Cunningham reveals his thoughts: "As we approach the final two rounds we mathematically have an eye on the championship. Myself and Peter feel we have been driving as well as ever this season and our consistency is paying dividends for us, we really feel we have got to grips with the Porsche this year rather than the Porsche having the grips on us. Moving forward as a team we may have been a little predictable in the past so maybe now is the time to mix things up a bit. Can’t wait – bring on Oulton"

The stunning VR Motorsport Praga R1T heads the Class 1 title chase, but with 206 points is doubtful for the overall crown. Team boss Vincent Randall has an enviable pool of driving talent to call upon, and various permutations of Tim Gray, Alastair Boulton and Goodwood legend Grant Williams have shown blistering pace and skill in getting the low-riding machine through traffic, though, as the points reflect, it hasn’t all been plain sailing; they have taken wins, but tempered with instances where the track or conditions haven’t enable them to make the best of it, plus they have been occasionally stymied by minor niggles. Their competition in class comes from the MacG Racing Taranis, Jonny MacGregor’s self-developed creation which he shares with Ben Sharich, which has posted a win, and from the two "works" Sakers of Paul Rose and Steve Harris. Fast in the race, but prone to concerns, the pair have recently drafted in co-drivers (Kristian Rose and Fun Cup frontrunner Chris Hart), enhancing their possibilities of success.

Class 5 is currently headed, with 105 points, by Chris Murphy, all accrued in the first few races of the season, but his BMW Z4 hasn’t shown up since, leaving Rob Baker’s Smart ForFour to uphold class honours. Rob’s early-season gearbox woes meant that points didn’t start flowing until mid-season, but with a scoring potential of 56 points up for grabs, he could well seize the Class 5 title.

But the points don’t show it all – there have been occasional and invitation competitors that came, saw and conquered this season. John Seale’s Lamborghini Huracan, the FF Corse Ferrari 488 of Wayne Marrs and Charlie Hollings, and the father and son pairing Richard and Sam Neary’s Team Abba Mercedes have all taken overall wins, and may be back before the season closes.