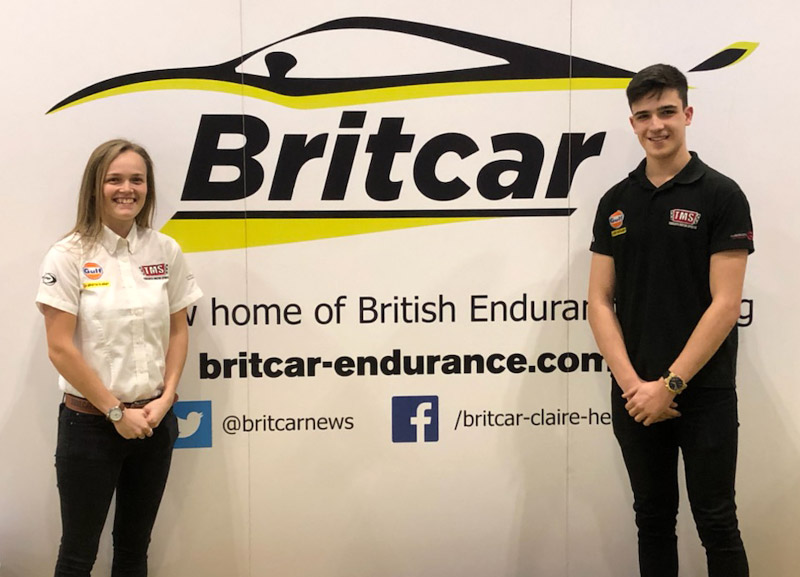 Any race driver wanting to move up a gear and further their career will at some stage want to pair up with a successful, championship-winning driver and as a youngster in the North of England, and Moh Ritson couldn’t have picked a better partner than last year’s winner of the Dunlop Endurance Championship – and first-ever female winner of that title – Sarah Moore.

Another graduate from BARC’s Junior Saloons, with his eye on GT racing, and marking his first season in a senior championship, Ritson will drive alongside Moore in one of Tockwith Motorsport’s Ginetta G50s. Ritson keeps himself fit through Mixed Martial Arts, rugby with Yarnbury RUFC, squash and tennis, so he’s already fit for sharing a car for a pair of 60-minute races in a single day.

Signing on the dotted line with Britcar’s managing director Claire Hedley at the Autosport International show, Moh said “I am extremely pleased to be partnered with Sarah this year – it was a pleasure to have her as a coach last year in the Juniors [Saloons] and to be racing alongside her, with Tockwith Motorsports, in 2019 will be amazing.” Sarah added “I’m looking forward to returning to Britcar and developing another Junior driver. It may be tough to try and defend the title, but I think Moh will do a fantastic job of stepping up to senior racing”.

Having already run Ritson in a Citroen Saxo last year, the Moores are a true motorsport family; Sarah’s older brother Nigel has already reached the dizzy heights of the Asian LeMans series. And the family know a thing or two about raising finances too – financial and product support for the pairing has already been negotiated with Chicane, Fusion By Design, Fusion Learning, Co-ord Sport and Woodhouse Grove – and more are expected to be announced shortly.