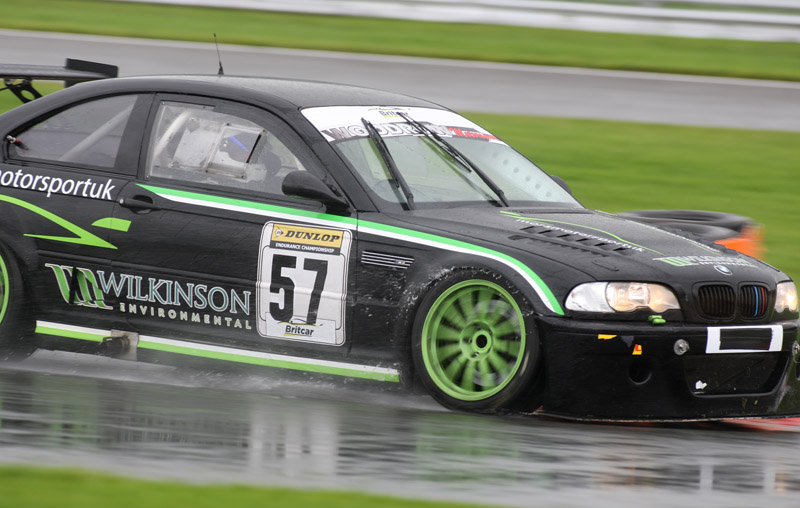 Mike Moss’s new recruit Scott Adam looked at the competitive machinery around him in the paddock before the races, and uttered disbelief when it was mentioned that the team’s BMW M3 E46 could gain an overall podium. As it turned out, he and regular #1 driver Moss won both races outright, with the usual excellent back-up from Woodrow Motorsport.

Qualifying
The qualifying session was boosted by some incursions from the Dunlop Endurance Championship, and with damp conditions worsening as the 30-minute session progressed, Calum Lockie bagged pole in the FF Corse Ferrari 458 GT3 by five and a half seconds over regular championship contender Jonny Cocker’s Whitebridge Motorsport Aston Martin Vantage. Local knowledge assisted Warrington businessmen Rick and Brad Nevinson to bag third on the grid in the Track Focused-run Porsche Cayman GT4, with the Moss/Adam BMW alongside, ahead of Geoff Steel, the team boss giving his new BMW E92 a run.

The Synchro Motorsport Honda Civic Type R was another Endurance runner making use of some additional track time for Oulton first-timer Alyn James, with experienced hand Martin Byford posting sixth best overall, and the first of the P2 contingent. Series newcomer Peter Rowbottom was next up in his Ferrari 458 Challenge, ahead of Marcus Fothergill and Dave Benett’s Porsche 997, atypically down the order – “we should have changed to wets” rued Fothergill, about their tyre choice. Ninth was the enthusiastic Team Lizard crew, with Steve Burke posting the time in the Nissan 350Z.

Race 1
Heavy rain determined two pace laps before the field was let go, and Calum Lockie was off like a robber’s dog into the lead, with Jonny Cocker’s Aston faced with a cascade of spray. Good starts by Moss, and particularly Byford, saw the BMW and Honda in third and fourth places as they crossed the line for the first time. Lockie’s lead was over half a minute by lap four, with a nice little battle developing between Rowbottom, Benett and Steel for sixth place, behind Rick Nevinson’s Cayman.

Geoff Steel had an off in his BMW E92, and with debris on the track, the Safety Car was deployed. Just a little too early for mandatory pit stops, and the field, straggled around the circuit, circulated tentatively in search of the Safety Car, though once the magic 20-minutes race distance elapsed, there was a flurry of pit-stoppers, Synchro wisely doing their driver change in the dryness of the garage; only Cocker stayed out to do another lone lap before coming in.

Once the caution was lifted, with the rain now eased and the field bunched up, Scott Adam found his BMW less than five seconds behind David Mason’s Ferrari, and what he considered impossible a few hour earlier was now in his grasp; his lead over the FF Corse machine stretched to 16 seconds in a couple of laps, before Mason acclimatised himself to the conditions and began to claw back the advantage, assisted by the BMW experiencing a rogue electrical issue which caused it to cut out intermittently as the 50-minute race ran down. Just eight seconds separated the leading pair as they started the final lap, but a spin by Mason put paid to a close finish, Adam crossing the line nearly a minute to the good. “I found the grip in the last five or six laps, but I played a bit of a chicken I’m afraid” confessed a self-effacing Mason.

Chris Murphy held it steady in the Whitebridge Aston, taking 3GT honours and more or less sealing he and Cocker’s Championship aspirations, whilst Martin Byford’s storming start in the Synchro Honda Civic placed it well for Alyn James to take it to the flag fourth overall, winning the P2 class. Rick and Brad Nevinson came fifth in their Cayman, and were 3GT runners-up, whilst Peter Rowbottom made the best of the tricky conditions in his powerful Ferrari 458, sixth overall and second in 1GT. Mark Gillham earned himself a sumptuous Debbie and Andrews sausage sarnie by finishing the Team Lizard Nissan 350z seventh in the order, and second in P2, while there was disbelief from the Bespoke Cars duo of Marcus Fothergill and Dave Benett as to how they ended up stone last, after no cars passed them; “We must have lost it under the Safety Car” Benett surmised.

Race 2
The second 50-minute counter was a race-within-a-race, run in conjunction with the Dunlop Endurance 150-minute affair, with the ProductionGT contingent being flagged-off after their race duration had ended. No FF Corse or Synchro for this one, they would be contesting the long-distance race only, though Whitebridge would be competing for both prizes to consolidate their championship lead.

Thus, with only Jonny Cocker’s Aston ahead of him as far as direct competition was concerned, Rick Nevinson found himself at the sharp end of Production/GT runners as the mixed field was let go in pouring rain. A fraught first lap in tricky conditions caught out some of the Endurance field, which Cocker and Mike Moss made the best of, with Nevinson heading a place-swapping bunch that included Steve Burke’s Nissan, Rowbottom’s Ferrari, Benett’s Porsche, and Endurance runner Sam Alpass’s BMW thrown in to upset things. All took their turn at the head of this pack at some point, before Benett got in front and eased away.

The pit stop flurry happened at 30 minutes in, Cocker the last to do so, handing the Whitebridge Aston to Chris Murphy, but all was not well, a gearbox issue becoming apparent, and there were several more pit stops, dropping them to third at the flag. Scott Adam relieved Mike Moss at the wheel of the BMW E46, and took another overall victory in extremely tricky conditions, the former British Superbikes rider and current Cooper Challenge front-runner acquitting himself well in his first foray in a RWD car. There was better news for Fothergill and Benett this time, back where they belong, second overall and heading the 3GT contenders. Peter Rowbottom bagged the 1GT win, finishing fourth overall, and a lap down on the winners were Rick and Brad Nevinson in the Cayman, in what was only their seventh race – there’s more to come from this father and son duo, while Team Lizard’s Steve Burke and Mark Gillam were rewarded with the P2 win in the team’s Nissan 350z.