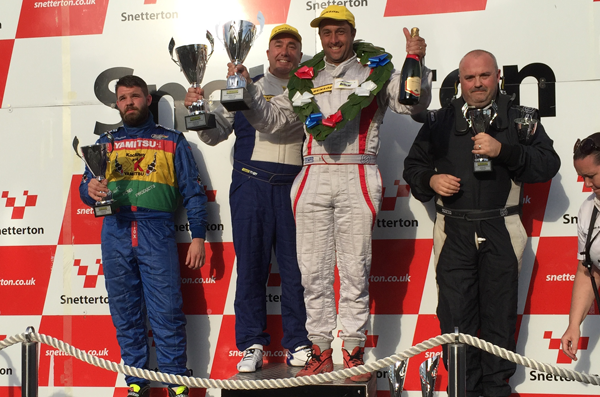 It was clear from the outset, from the Saturday morning free practice session, through qualifying, that the sharp-end of this race would be about three cars – the Mike Moss/Tom Howard BMW M3, the Lotus Europa of Fabio Randaccio and Nick Randall, and lone driver Ruben Anakhasyan in the Century Motorsport Ginetta G55 GT4, who qualified within just over a second of each other, and around four seconds ahead of the rest of the pack, led by Del Shelton’s BMW M3 E36.
Howard blasted away from pole, but could only hold a tenuous lead over Randaccio, who was hoping that the misfire that plagued qualifying was now fixed. It wasn’t, and by lap three, the Lotus, now more than six seconds shy of leader Howard, was pitbound. It would return to the track sporadically during the race, but was retired half-an-hour in. Anakhasyan bided his time, having inherited second place, and by the time Howard pitted the BMW, around 29 minutes in, the black Ginetta was nearly half a minute adrift. Once Anakhasyan had taken his mandatory stop, the gap between the leading two had been reduced to 18 seconds, and started to come down to the tune of four seconds a lap, as Anakhasyan mounted a challenge to Mike Moss, who had relieved Howard in the leading BMW. The race wasn’t long enough though, and after 50 minutes of racing, despite carving great lumps out of the lead, the Ginetta was 7.515 seconds behind the victorious Moss car. ”It’s good to be pushed” admitted Moss, adding “but he needed a couple more laps”.

Behind the lead battle, the two BMWs of Geoff Steel Racing had disputed honours, the E36 of lone driver Del Shelton squabbling with first-time novice Rob Hudson’s E46, despite a bit of an off for the newcomer, who then took the chasing Chris Murphy’s Aston Martin Vantage. UK-based Brazilian pro-driver Adriano Medeiros took over the BMW from Hudson during the mandatory pit-stop, and clawed back to finish fourth overall behind Shelton, completing the Class 1 podium, with Moss and Howard on the top step.
There were two Honda Civics in Class 2; the stunning Synchro Motorsport Type R, expertly fabricated by Honda employees in their own time in a corner of the Swindon factory, dominated in the hands of Alyn James, whilst Simon Green and race returnee Trevor Keates gave all they could an older road car-cum-trackday machine-cum quickly converted racecar.
Ruben Anakhaysan took the honours in the GT class of the race, with Chris Murphy, in the Whitebridge Aston Martin Vantage second, whilst not classified due to a misunderstanding of the refuelling regulations was the beautiful and newly acquired BMW GT4 of Neil Garnham and Rob Young.

The glorious hot weather had taken its toll on the day’s undercard, producing a late-running programme, and with the 18:30 curfew looming, the second Britcar GT and Production race was going to be truncated at around 35 minutes.
The grid lined up in the finishing order of Race, with the same starting drivers. The Hoffmans of Henley team had at last fixed the misfire in the Lotus Europa, found to be a blocked injector, and would be starting from the back of the grid. Probably mindful of the shortened race length, Fabio Randaccio had no time to waste and was off like a robber’s dog, from the red lights going out up to the braking area at Riches passing four cars, and by the time he got round to the start/finish line for the first time, had seized the lead from Tom Howard’s BMW M3.

Howard had no answer for the GT-class Lotus this time, and pitted early for the Moss Motorsport team to investigate a handling issue, dropping down the order and allowing Ruben Anakhaysan’S Ginetta G55 GT4 to take second place.

The race seemed to have barely started when, due to the known foreshortening, the teams began making their mandatory pit stops. Nick Randall at last got some race time in, relieving Randaccio in the Lotus, but woe befell the jinxed machine yet again, for within three laps an alternator failure left Randalll stranded out on the circuit, leaving Anakhasyan to cruise to a comfortable win when the flag fell after 33 minutes of racing, nearly 14 seconds ahead of The Hudson/Medeiros BMW E46, which took the Class 1 honours ahead of Geoff Steel stablemate Del Shelton’s BMW E36 (both benefitting from the expert pit-stop timing of ace Geoff Steel spannerman Will Fields, who guided them out of the pit exit with old-style “come/hold/go” gestures), and the Moss/Howard E46, which had a steady race after the earlier perceived issues.

Alyn James had the bit between his teeth in the Synchro Honda Civic Type R, the site of the touring car giving Chris Murphy’s Aston Martin Vantage a run for its money being something never seen outside of a Britcar race. James took the Class 2 victory, whilst quad-bike champion Murphy was the runner-up in the GT class, and the Simon Green/Trevor Keates pairing found a bit more pace in their old-style Civic this time, posting a second place in Class 2 again.

It had been a successful day for Ruben Anakhaysan, taking a nice haul of points away from the inaugural rounds of the Championship. “In the first race it was tough, and I needed a few more laps, but the second race was a bit easier, not so hot” he said afterwards.

Rob Hudson also came away with an armful of trophies from his first racing weekend, the highlight being the class win in Race 2. “I’ve been doing trackdays, instructed by Adriano, for three years. This result is blinding for me, but I’ve still got a lot to learn, and I’m looking forward to the rest of the season” he grinned.