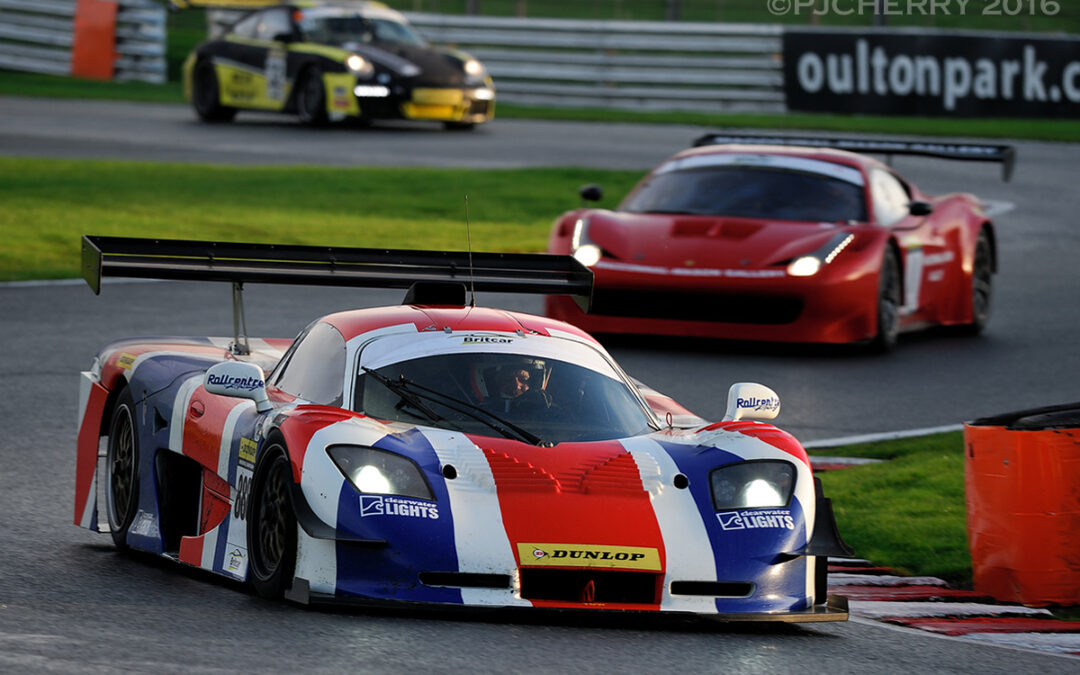 It’s almost tradition now for Martin Short to breeze into a late-season Britcar race and mark his presence, and this time it was with current BGT driving partner Richard Neary, and in the Super GT Mosler that hadn’t been fired-up for two years.

Qualifying
A wet 30-minute qualifying session meant that the times achieved on a dry track in the earlier free practice session wouldn’t be matched; the Mosler posted 1:38.501 then, but with no wet-running data, the Rollcentre team tried a number of set-ups that, at best, placed Richard Neary mid-grid at 1:53.345, nearly six seconds off Calum Lockie’s pole in the FF Corse Ferrari 458, which beat championship contender Nigel Moore’s Audi R8 by 0.205 seconds. Kevin Clarke was on day-release from Intersport’s TOCA duties at Brands Hatch, and placed the ING Sport BMW Z4 shared with Ian Lawson on the second row, with the Century Motorsport Ginetta G55 alongside, Jacob Mathiassen setting the time. Joining Neary’s Mosler on the third row was the Class 3 Invitation entry Orbital Sound Lotus Exige; Joey Foster had impressed mightily in the free practice session, though the wet qualifying conditions had evened things out a little – car owner Chris Headlam would share the driving in the Lanan-run machine.

The Jonny Cocker/Chris Murphy Aston Martin Vantage headed the third row, with Class 2 contenders Mark and Peter Cunningham’s Porsche 997 alongside, and the remaining contenders were interspersed with the faster of Britcar Production/GT contingent, who were sharing the grid and the first 50-minutes of the race. The Synchro Motorsport Honda Civic of Martin Byford/Alyn James, the BMW M3 GTR of Sam Alpass/Lee Atkins lined-up a row apart, with two cars with qualifying rows sharing the back row – Fabio Randaccio and Nick Randall missed both free practice and qualifying rectifying a clutch slave cylinder in the Lotus Europa, and the Woodard Racing Mini Cooper had limited running from Daniel Woodard and double-amputee war veteran David Birrell whilst issues were sorted.

Race
The rain was pouring as the Pace Car led the field away for two pace laps, and once the pack was let go, Lockie took a lead that Nigel Moore was anxious not to let him have, taking an area of tarmac that Kevin Clarke had set his sights on, the resulting clash sending Clarke’s BMW Z4 off, and rejoining amongst the Production/GT cars. Neary had hauled the Mosler through the carnage up to third on the opening lap, but gradually lost touch with the leading duo of Lockie and Moore, who were never more than two seconds apart. But not for long – by lap six Moore’s Audi had passed the Ferrari and began to eke out a lead assisted by traffic, and by lap nine Kevin Clarke had cut through the Production runners and was back in touch with the Endurance contingent.

Lap 13 was unlucky for some – observations from out on the circuit told of a coming together of three cars, leaving the luckless Fabio Randaccio’s Lotus parked-up into retirement, and the leading Audi bound for the pit garage, where intrepid pitlane reporter Rob Hedley could only glean that the car had sustained two counts of accident damage and was being sorted. As the first 30 minutes of the race elapsed, Jonny Cocker brought the Whitebridge Aston in for an early mandatory stop, adhering to the Production/GT race (in which it was also competing) ruling; Chris Murphy took over.

The Tockwith Audi lost two laps in the pits, and Phil Hanson was despatched to make up as much of the deficit as he could. But that was brought to swift conclusion before he could complete a single lap, as, again, there was a clash with Clarke’s BMW. This time the Audi was out for good, the circuit team unable to recover the stricken machine, and Clarke made a visit to the pits, with only 40 minutes of the race so far run. He rejoined after some running repairs, just as Joey Foster, who’s Lotus Exige had been slowing erratically, came to a halt at Deer Leap. He got it going again, into the pit lane, where a fuel pump issue was diagnosed. This was quickly rectified and Chris Headlam was installed for a middle stint, though he did make a further stop next time round to sort out a seat belt issue.

The Production/GT race was flagged-off at 50 minutes with the minimum of fuss, and the Whitebridge Aston made a pit stop – it didn’t have to at this point, but this was unplanned, and the start of the gearbox issues that would plague it’s race. There as a planned stop, though, for the Cunningham’s Porsche, Mark handing over to dad Peter.

David Birrell had been circulating steadily in the Woodard Mini Cooper, but on the hour mark, brought it in due to an overheating issue; sadly, it would not re-appear.

With the slower running due to the wet conditions, it was clear that fuel consumption may not be a significant issue in this race, and indeed, Leader Lockie went to half-distance, an hour and a quarter. Before bringing in the Ferrari 458 for a service. He jumped back in again, to maintain continuity and go his full maximum stint length of 90 minutes. By this time, Jacob Mathiassen had already handed the class-leading Ginetta G55 to Steve Fresle, and Sam Alpass had brought in the Geoff Steel-run BMW M3 for Lee Atkins to take over. This would be a short-lived stint though, as the BMW was parked-up out on the circuit just a lap later, and would not rejoin.

So, with the Audi out, and the BMW Z4 delayed, Richard Neary was now just 45 seconds behind the leading Ferrari, which was soon about to make its second stop. The Mosler stretched its fuel consumption, and pitted with just 68 minutes left, Martin Short rejoining at the wheel, still in second place. Kevin Clarke brought the BMW Z4 in too, and Ian Lawson came out retaining third place. It was only a few laps later that Lockie pitted the Ferrari for the final time, and David Mason was installed to take the car to the flag.

Short took the lead while Mason was acclimatising to the conditions, and Ian Lawson unlapped himself from Mason, and began to claw back the deficit. Mason’s lap times began to come down, though Short had grown a handsome lead of nearly two laps, before the Mosler pitted for its final mandatory stop. Neary got back in for the last half-hour of the race, and cruised to victory two laps to the good, in a race that surreptitiously seemed to have been shortened by three minutes to beat the curfew. Ian Lawson had seized second place from Mason on the penultimate lap after a dramatic chase-down, but a post-race investigation by the officials determined that the ING Sport BMW Z4 had contravened the pit-stop regulations. They were awarded a one-minute penalty, dropping them back to third place overall, and in class.

“There were no problems” confessed Martin Short, for a race car that hadn’t seen the light of day for two years, adding “Richard did the lion’s share of the work, I just stroked it”.
Behind the leading Class 1 trio, lone Class 2 contenders Mark and Peter Cunningham came home fourth overall in the Shaws Glass Porsche 997, declaring it one of their best races; “It’s good to finish with no problems and a class win at last” said Peter.

Class 3 victors Steve Fresle and Jacob Mathiassen were fifth overall, back to normal service for the Century Motorsport Ginetta G55 after a slightly troubled mid-season, finishing ahead of Invitation runners Chris Headlam and Joey Foster in the Lanan-run Lotus Exige, and the Murphy/Cocker Aston Martin Vantage, which had endured gearbox problems for much of the race; “We had so many pit stops, and it was stuck in fourth for the last 20 minutes” exclaimed Jonny Cocker.

Class 5 went again to Synchro Motorsport, the tricky conditions allowing Martin Byford and Alyn James to punch above their weight with the faster machinery in the Honda Civic Type R, and a final, quick, pit stop was due to Alyn’s drinks bottle coming disconnected and sliding around the car. Sadly, the competition with the Woodard Mini Cooper never materialised, but the duo nevertheless competed as they ever would.

The tricky conditions in this race meant that most of the runners, if not all, endured a spin or a missed chicane at some point; most survived, some didn’t. The sad demise of the Tockwith Audi, and the success of the Rollcentre Mosler, put a different complexion on the event, and the points standings. We go to Brands Hatch on November 13th to conclude the championship in the darkness.