Neary Sprints to Victory, Black Mamba Snake Their Way Through the Infield Circuit 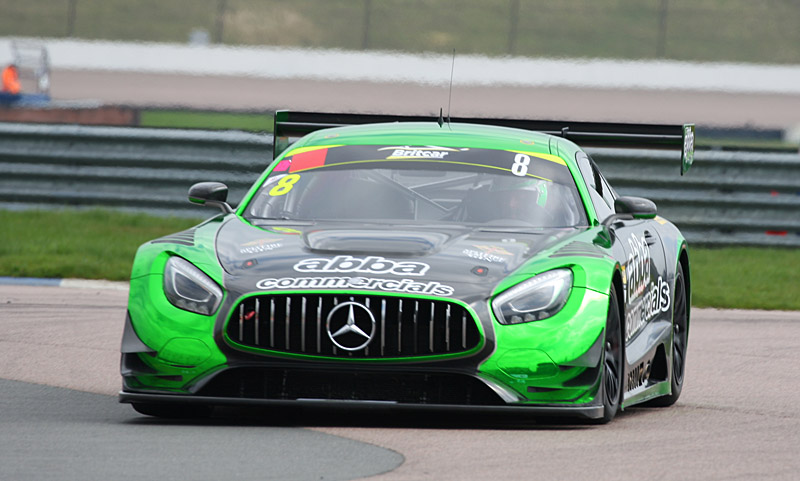 Sprint Category
Richard Neary’s victory in the opening 50-minute race at Rockingham was as much about mathematics as it was about driving skill, power and preparation; how far would pro-driver Ross Wylie, taking the first stint in David Mason’s Ferrari 458 GT3, have to be ahead of the Team Abba Commercials Mercedes GT3 at pit-stop time for gentleman-driver Mason to keep the lead in his closing 20-minute stint? Wylie had built a buffer of 23.6 seconds when he pitted, and the gap at the flag was just over a minute and a quarter, just a few seconds shy of a decent lap time around the Rockingham Super Sportscar configuration, so there’s your rough answer.
Lone driver John Seale was impressive in the white FF Corse Ferrari 488, late-stopping and taking the lead for a while, finishing third in Sprint and fourth on the road in the race combined with the Endurance category. Mike Moss and Tom Howard took the Class 2 honours, their BMW 1M quickly shaken-down of the off-season improvements, Howard impressively picking his way through a number of Endurance runners towards the end, finishing sixth overall, while class runners-up Darelle Wilson and Ian Heward adopted a subtle approach in their re-engined and re-engineered Porsche 911 RSR, and sadly Peter Challis’s 997 Cup machine posted an early retirement. Class 3 was the preserve of the two Aston Martins of Whitebridge Motorsport; both cars having lone-drivers – Chris Murphy and new recruit Barry McMahon – elected to get their mandatory pit stops out of the way very early (an often-used McMahon trick), and towards the end, McMahon was looking particularly punchy, battling with the Endurance-running Mercedes GT4 for position, winning the class and coming home 10th overall.

The Class 4 victory went to Jon Watt, in the newly re-liveried and intensely-sponsored Moss Motorsport BMW M3, ahead of father-and-son duo Robert and Alex Day, in "Sherman", the much-loved ex-Rob Austin BTCC Audi A4, with surprised returnees Chris Bentley and John Clonis bagging the final class podium spot in their SEAT Leon, while sadly the Tockwith Ginetta G50 of reigning class champions Ed Moore and Marmaduke Hall non-started due to engine problems in qualifying. Tim Docker had it all his own way in Class 5, a lone driver in the VW Scirroco lonely on his way to the class win, after classmates Rob Baker/Lucas Nannetti expired with a gearbox issue in the Smart 4/4 in qualifying, and series newcomer Christie Doran encountered electrical issues in her VW Golf and failed to make the grid.

Endurance Category
With the more powerful cars heading the Sprint category, it was GT4 machines to the fore in Endurance, with headlining Class 3 dominated by Ginetta G55s, and buoyed by the stunning KTM X-Bow Coupe of Mike McCollum and Sean Cooper, the EDF Aston Martin of Mal Sandford and Ben Seyfried, and the invitation entry of the Fox Motorsport Mercedes GT4 of Mark Murfitt and Michael Broadhurst.

The two Black Mamba Ginettas, exuding menace in their black and orange livery, held station line- astern behind the leading Sprint runners in the joint race, the #22 car of Luke Williams/Andy Demetriou slightly having the edge over the #6 Jayde Kruger/Chris Papageorgiou machine, with the fast ex-Formula Ford exponents taking the opening stints. The Team Hard 2016-spec G55s couldn’t match the Optimum-run 2017 versions for this opening round, though were still evenly matched, running as a trio, with the Simon Rudd/Tom Barley car making the best of the situation. Lack of pre-season testing, and qualifying woes (including a door flying off) saw the Darron Lewis/Adam Hatfield G55 starting atypically in the middle of the grid, with ex-short circuit racer Lewis unable to make his trademark run-past from the inside-row position; he made places in his stint though, and Hatfield was taking no prisoners as the race drew to a close, finishing behind team mates Rudd and Barley, and, after a last-lap dash, just ahead of invitees Graham Roberts and Ben Wallace in the third Team Hard car, the whole team covered by 10 seconds at the flag. The Murfitt/Broadhurst Mercedes GT4, like it’s GT4 counterpart, a fine looking beast, was a lap down to the Ginettas, and the McCollum/Cooper KTM ended up in the gravel three laps from the finish after a clash during a last-gasp squabble for position. Relative novice Mal Sandford tackled the race alone to maximise his track time in the EDF Motorsport Aston, gamely finishing fifth in class.

The Class 4 race promised to be intensely competed by the two stand-out SEAT Cupras of BTCC stars Adam Morgan/Stewart Lines and Ashley Woodman/Martin Byford in a brand new machine, so it was pleasant surprise to see Sarah Moore and 16-year old Matty Greenwood, in his first senior race, take the class victory after a mature and understated performance. The two Class 4 giants, though, were victim of their self-made issues – qualifying identified that the faster drivers in each car were a tenth of a second apart over a flying lap, and Morgan and Byford went head-to-head in their opening stints, at first close, then Byford realising the choice of tyre compound could have been better. Lines inherited an almost brakeless SEAT after Morgan’s balls-out stint, though kept ahead of Woodman, who continued to struggle with that tyre choice – over 11 seconds separated them at the flag.

So, an impressive one-two for Black Mamba at the head of the Endurance field, fulfilling the promise they showed late last season, with the Williams/Demetriou G55 finishing six seconds ahead of the Kruger/Papageorgiou car, with nearly 30 seconds over their class rivals. Work to be done for some before the second, two-hour, race.