Oulton Endurance Race: Jack was Nimble, Jack was Quick, and Garry Made It Stick 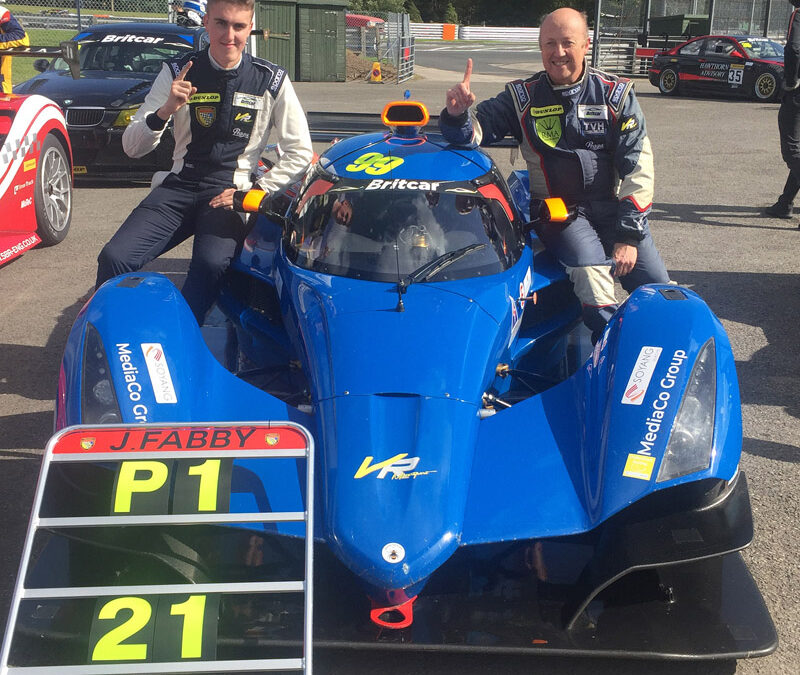 What a way to celebrate your 21st birthday! Jack Fabby pulled out a substantial lead in his opening stint in the one-hour race, and Garry Townsend complemented the youngster’s performance by taking the blue VR Motorsport Praga R1T to a convincing win, a triumph celebrated by the team’s other birthday-boy, race engineer Wes Evans. The car had extensive changes to its set up, visiting all three of VR’s bases for the different elements required, with input from Tim Gray, Jack Fabby and Tiga cars, as Garry Townsend explained after the race; "We’ve had a number of set-up revisions, and I’m more comfortable in the car now, as well as getting more used to this kind of car".

It was a different story in qualifying though – the Danny Harrison/Jem Hepworth "art car" Praga R1T took pole, over a second ahead of the race-winning machine, but between them on the grid was the SB Race Engineering Ferrari 488, a fired-up Andy Schulz posting a time for the Class 2 machine just 0.058 seconds shy of the Class 1 polesitter, and this trio were nearly four seconds ahead of the Ben Dimmack/Steve Burgess Radical RXC.

And it was Jem Hepworth who took the initiative at the rolling start, taking the lead into the first corner and down the hill, with Paul Bailey, taking his usual opening stint in the Ferrari, maintaining grid order, though by the time the pack re-appeared from the hidden part of the circuit, Fabby was in the lead, and crossed the line on the first lap over three seconds to the good over Jem Hepworth, followed by Bailey, Steve Burgess in the Radical, the amazing BMW M3 of Jonathan Evans, and Nicole Drought’s Cayman, this pair heading the Class 4 contingent. Next time round, Fabby’s lead had doubled, and then the Safety Car came out. Ben Sharich’s Taranis had run out of brakes at Shell and embedded itself in the gravel; "Sadly a lack of brakes after Island Bend into Shell Oils hairpin wasn’t quite in the plan. Luckily there was no damage other than digging up a chunk of gravel, but it certainly was an arse-clenching moment" he said later. The Taranis made it back to the pits under it’s own power, and the team set about cleaning it up, but many laps were lost, and whilst Jonny MacGregor made a valiant effort of adapting his methods to compensate for the braking issue, they failed to complete 80% of the race-winner’s distance, and weren’t classified. 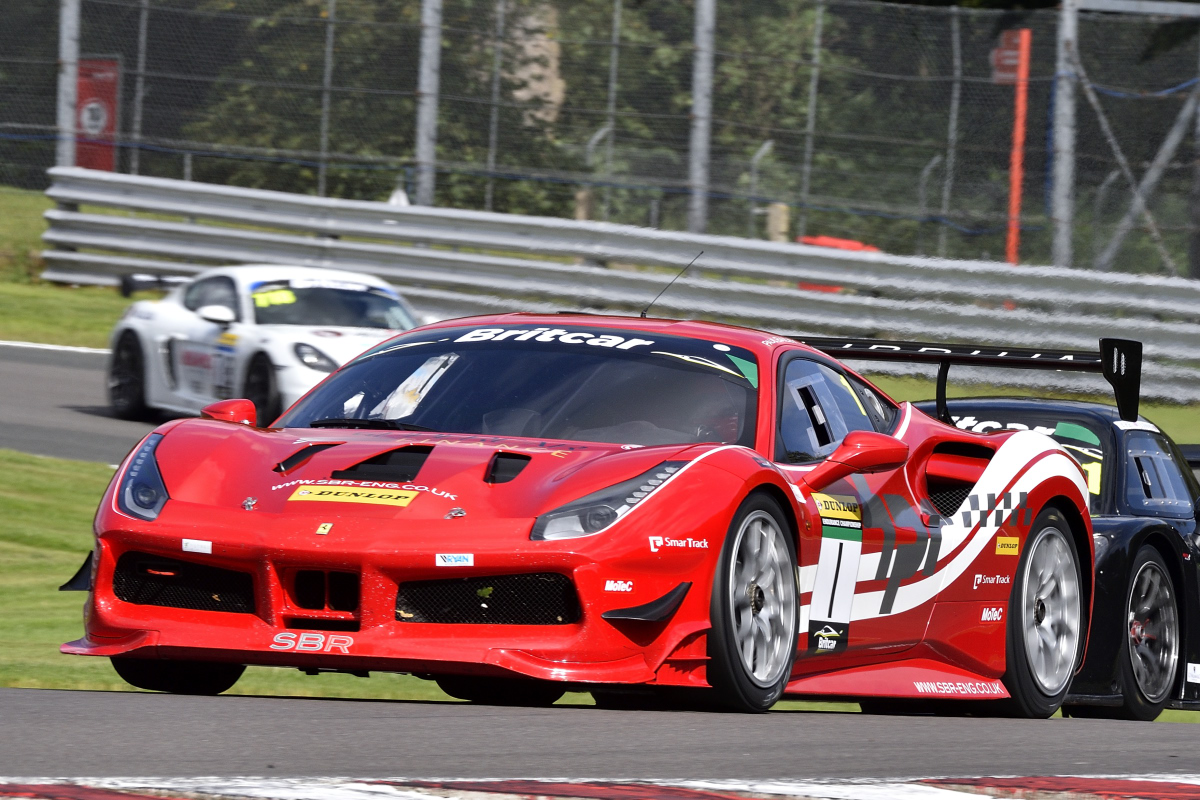 The Safety Car came in after three laps, and Fabby resumed his mission, pulling out three to four seconds a lap, setting the fastest lap of the race on lap 10, and having a minor scare when Mike Moss’s BMW M3 rejoined the track in front of him. Behind the leader, the situation remained stable for the first 20 minutes of the race – Jem Hepworth a couple of seconds ahead of Steve Burgess’s Radical, which headed the Class 2 runners, Bailey’s Ferrari and Warren McKinlay in the naturally aspirated Praga R1, which hadn’t had to fight through the pack this time – "it makes a change to start from the grid rather than the pit lane" McKinlay had joked earlier. Catching the camouflage-hued Praga, though, was Jonathan Evans in the CRH Racing BMW M3, who was tailed by Nicole Drought’s Porsche Cayman 718, and the Ligier of Marcus Vivian.

The pit window opened 20 minutes in, and the first caller, not Paul Bailey this time, was Jem Hepworth, followed by Dave Benett in the lone Class 3 runner, the Bespoke Cars Porsche 991, and single driver Tim Docker, maybe hoping to get his Class 4 rivals "on the undercut" in his VW Golf TCR. Paul Bailey, in fact, pitted next time around, handing the Ferrari to Andy Schulz, while Danny Harrison rejoined in the VR Motorsport Praga "art car", to do something about stable-mate Fabby’s lead of nigh-on half a minute. Sadly, he was denied the opportunity of what could have been an epic claw-back, as the car came to rest on the out lap, with driveshaft failure. Staying out, though, until the pit window latch was just about to click shut, were Burgess in the Radical, and Britcar returnee Dominic Malone, who had inherited the overall lead for one glorious lap before finally pitting the AMSpeed BMW M3 E90. Sadly retiring at this point with a dropped valve was the Newbarn Racing Jaguar F-type of brothers Callum and Adam Thompson, the team of enthusiasts with, apart from the drivers, no prior experience of motorsport other than as spectators, facing an engine repair. 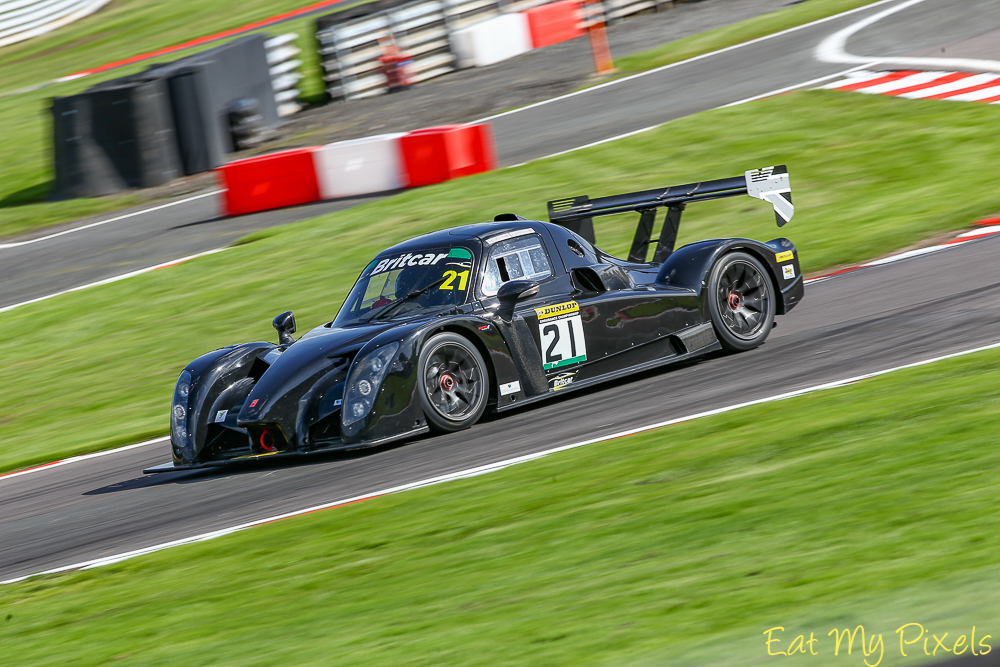 Ben Dimmack just held on to 2nd in the Radical RXC

The men in serious trousers in Race Control had now studied the pit-stop data, and awarded stop/go penalties to the Valluga Porsche Cayman and the Bespoke Cars Porsche 991, and Sean Doyle and Marcus Fothergill duly took their penalties.

With the other Class 1 cars now out of the picture, leader Garry Townsend had little to worry his 26-second advantage, but he nevertheless pressed on, and behind him Ben Dimmack, now in the Radical, had Andy Schulz’s Ferrari 488 closing in, and a fight for second place, and the Class 2 win, was on the cards before the end of the race, though this was stymied when the Ferrari had a spin 10 minutes from the end – "It could have been something on the track, it looked like someone had gone off there, but I was driving faster than I ever have here before" he explained. Unruffled, he continued his pursuit, cutting a gap of 18 seconds down to just four seconds when the flag fell.

So, a jubilant win for the Fabby/Townsend pairing, their first as a partnership this season, which provisionally elevates them to the top of the Class 1 points standings. The Dimmack/Burgess Radical held on to second place, and reigning champions Bailey and Schulz provisionally top the overall standings by dint of their third place overall, and second in Class 2, finishing ahead of the Warren McKinlay / Martyn Compton Praga R1, another great result for the armed forces veterans. Tom Bradshaw took over the CRH Racing BMW M3 from Jonathan Evans – the pair had held the Class 4 lead throughout, and are becoming the team to beat, and Luke Davenport relieved Marcus Vivian in the Reflex Racing Ligier JS2-R, getting the jump on the Drought/Doyle Cayman, which had to take the stop/go penalty, while lone Class 3 runners Dave Benett and Marcus Fothergill were similarly delayed by a penalty, bringing home the Porsche 991 to midfield finish.

Finishing just off the Class 4 podium was Dominic Malone in the AMSpeed M3, an impressive return to the championship which earned him the Driver of the Day award, with the Team BRIT Aston Martin of Bobby Trundley and Aaron Morgan just seven seconds adrift, followed by Tim Docker, upholding FWD honours in the Maximum Motorsport Golf TCR. The AMSpeed team, fielding three BMW M3s of varying heritage, worked hard to refettle the Adam Howarth / Chris Boardman E36 after a shunt in qualifying, and seventh in class was the reward for the Britcar debutants, with the Matthew Sanders / Jack Layton Zoek-sponsored E46 posting the closest finish of the race, just 0.132 seconds behind the PB Racing Porsche Cayman 981 of Peter Erceg when the flag fell.