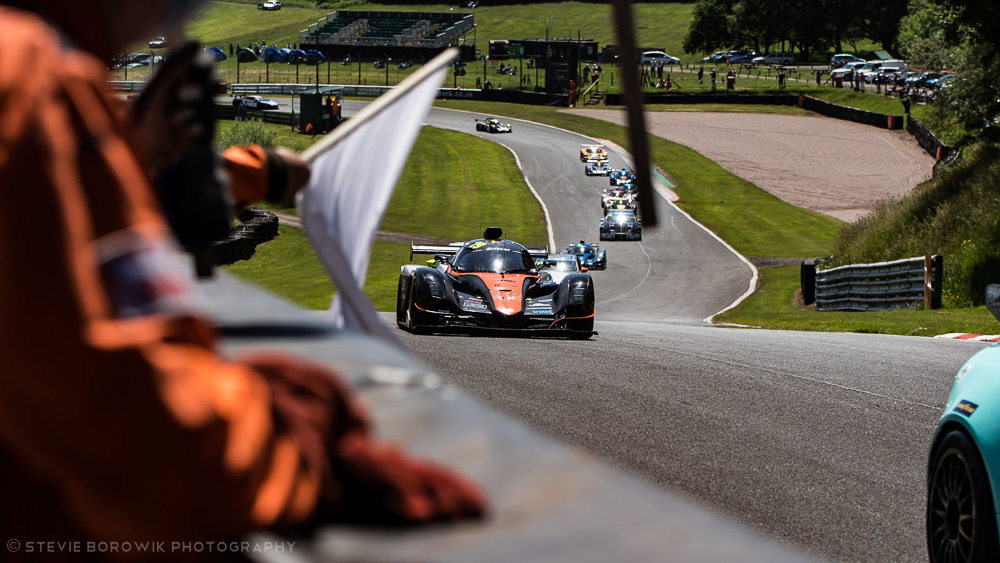 Angus Martin is studying Sports Journalism at the University of Plymouth, and Britcar invited him along to Oulton Park for work experience, and to boost our media team. We think his first stab at a race report is a cracking job, and publish it in full, unedited, here.

The Motus One with Moorgate McLaren 650S of Dave Scaramanga and Will Powell took the spoils for Race One at Oulton Park, taking their first class win of the season. An impressive feat, considering Scaramanga had not previously raced at the tricky Cheshire circuit. This result puts the Motus McLaren team in the lead of Class one and third in the overall standings.

The McLaren, one of two Class One cars, beat the Taranis of Jonny MacGregor. MacGregor passed Scaramanga at the start, but the Motus McLaren repassed after the pit stops now under the control of Powell. Despite a brief moment on lap 17, a foray wide coming out of Old Hill Corner, which allowed MacGregor to pass, Powell held his nerve and repassed two laps later. He brought home the car to take their first class win of the season.

Class three was won convincingly by the Ferrari 458 Challenge of Chris Goddard and Charlie Hollings, who at one point looked set to win the race overall. This feat came courtesy of a fortunate safety car which was sent out after the Newbarn Racing Jaguar suffered a prop shaft failure and was left stricken. This safety car came out just before the pit window opened and Goddard was fortunate that when he came around while catching the queue the pit window opened allowing him a free pitstop. When Hollings emerged on track he passed all the cars who had then pitted and took the outright lead, a minute ahead of the leading Praga.

Sadly for the RNR team the outright win was taken from them as they had to serve a drive-through penalty due to their pitstop being under the mandatory two minutes. This brought them down the order. Peter Cunningham in the SG Racing Porsche 997 Cup also had to take a second trip through the pits after the SG Racing team came in and out under the two-minute minimum. Cunningham was making progress through the field but was thwarted when a second safety car was deployed in order to recover the number six BMW M3 driven by Nathan Wells and Mark Steward. The Digiplat Racing car managed a restart which rang true the old adage of turning it off-and-on again. However a class third for the SG Racing team, though not a first, certainly helped raise spirits. In second place was the Bespoke Defenders Porsche 991 of Marcus Fothergill and Dave Benett. They finished keeping out of trouble. 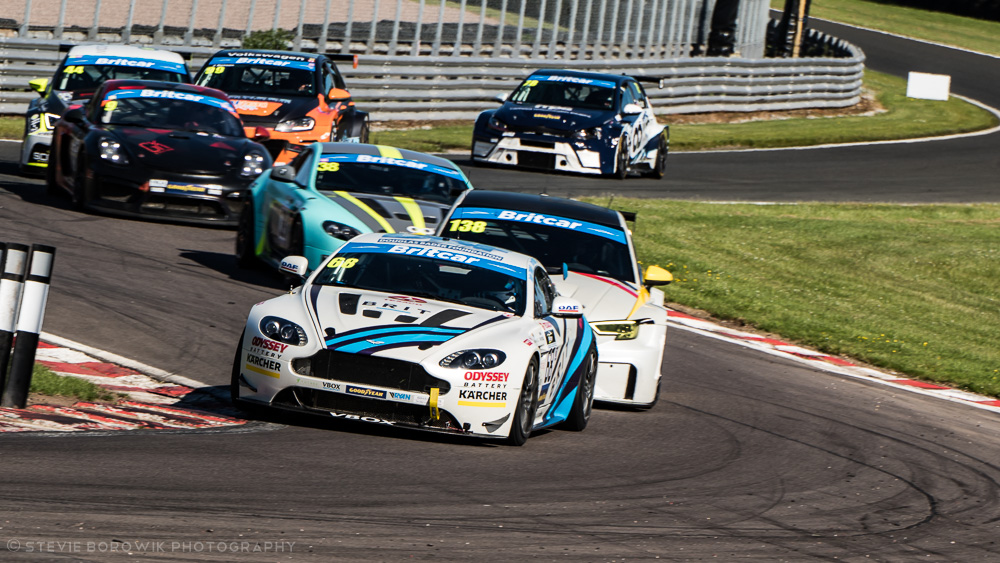 Also benefiting from the timing of the safety car was the two Class four cars of Team BRIT’s Aston Martin Vantage and EDF Motorsports’ Cupra TCR. They both pitted along with the RNR Ferrari and came out second and third overall. They dropped back as the Class one cars and Pragas came through, but finished an impressive eleventh and twelfth. The two cars played a captivating game of cat and mouse throughout most of the race with the Team BRIT Aston of Bobby Trundley and Aaron Morgan beating the Cupra driven by Ashley Woodman and Martin Byford to a class win. The Simpsons Motorsport Audi TCR completed the class finishing third.

The nine Praga class cars locked out the first nine places in qualifying, showing that Oulton Park was definitely a Praga circuit. Alex Kapadia and Richard Wells took pole in the 111 car, with Christopher Wesemael and Richard Morris in the number 29, second and Jay Morton and Angus Fender third in the 85 car.

The 111 driven by Richard Wells led the opening stint and once the pit-stops had occurred and the race order was shuffled, Alex Kapadia regained the lead in a couple of laps. Things were going well for him until the second safety car, which went as quickly as it came, giving Angus Fender the chance to power into the lead. Fender went on to win the race, followed home by Kapadia and the 29 of Wesemeal.

Race Two
All the cars made it to the grid for the second race of the day this time. The Motus One With Moorgate, McLaren team completing a clean sweep as they claimed a second class win of the day. Also winning two out of two races: the class three, RNR Ferrari and the number 85 Praga. While the Team BRIT, Aston Martin could not complete their sweep, having an unfortunate off in the early part of the race.

Dave Scaramanga and Will Powell had an easier time of it in race two as they kept Jonny MacGregor’s Taranis behind them at the start. Keeping the class lead, the pairing made ground on the leading Praga’s; who again had the advantage over the GT cars. In the second stint Powell overtook the 84 Praga of Chris Bridle and went on to finish an over all fifth placed, with the Taranis finishing seventh.

Chris Goddard and Charlie Hollings scored their second win of the day. They managed their pace well behind the 32 of Mark Cunningham who had passed them at the start. During the pit-stops, which again occurred under safety car the two teams pitted together. This time both their stops were the correct length and Hollings soon passed Peter Cunningham when the track went to green. The Digiplat BMW M3 of Nathan Wells and Mark Steward and the Bespoke Defenders Porsche 911 of Marcus Fothergill and Dave Benett both had problems throughout the race. They both made additional pit-stops and did have a chance to compete for the class win. Which left the RNR Ferrari to take home the second class win of the day, with the Cunningham’s claiming second and the Bespoke Defender Porsche coming home third. 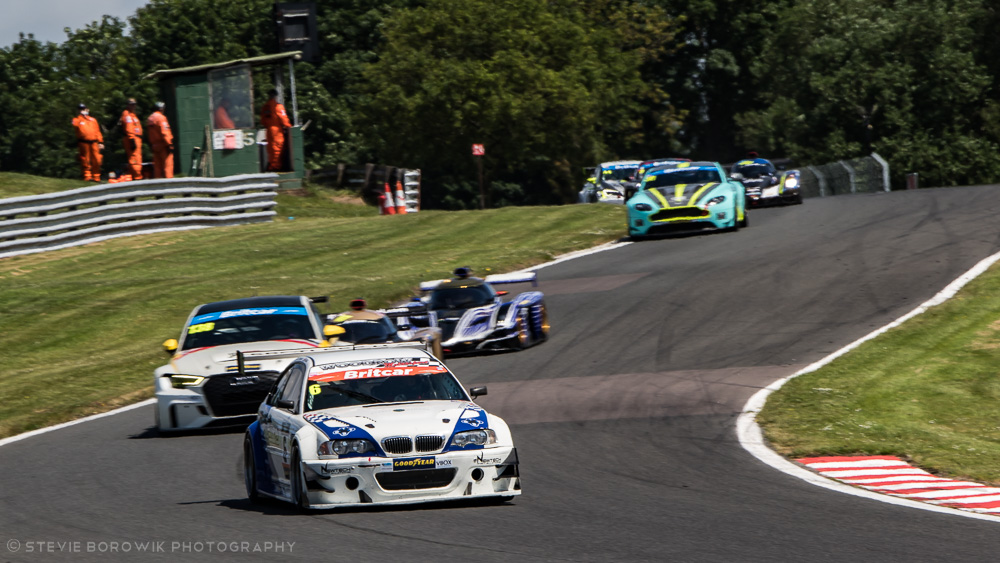 Class four provided plenty of ups and downs in race two. The number 60 Cupra TCR driven by Ashley Woodman and Martin Byford led the class in the early stages, followed by Team BRIT’s Aston Martin of Bobby Trundley and Aaron Morgan and the Simpsons Motorsport Audi TCR of Hugo Cook and Sacha Kakad. Kakad passed the Aston which spun off a couple laps later bringing out the safety car. After the pitstops the Audi had jumped the Cupra and were lapping in a group, along with the 9 Porsche 981 of Peter Erceg and the 32 SG Racing Porsche. Around lap 24 while still in the class lead, Cook’s Audi suffered damage while being lapped and pulled out of the race at Hislop’s, giving the lead to the number 60 Cupra. Woodman kept this lead to the flag, while class second Alex Day and William Foster earned a 10 second penalty for a safety car infringement and dropped to third behind Erceg’s Porsche.
At the head of the field the Praga’s once again dominated preceding’s. The 111 of Richard Well’s kept the lead at the start and led the race until the pit-stop phase. Following the safety car Well’s rounded Lodge with 17 seconds left until the pit window opened meaning he had to stay out behind the safety car for a full extra lap. When the 111 car pitted, now with Alex Kapadia at the helm, it was eleventh placed. But a storming drive from Kapadia saw him storm to a third placed finish.

Benefiting from the 111’s misfortune was the 333 of Abbie Eaton and Geordie Mutch and the 85 of Jay Morton and Angus Fender. Taking the lead when the safety car came in Mutch held off Fender till lap 25; with Fender passing Mutch into Old Hall Corner. Mutch kept pace with Fender but couldn’t find a way past and was hampered by traffic on several occasions.
With a few regular entries not attending Oulton Park; heading to the next event in Silverstone on the 3rd of July the Bespoke Defenders Porsche has taken the overall Championship lead followed by Peter Erceg’s Porsche 981 and The Motus One with Moorgate McLaren of Dave Scaramanga and Will Powell. In the lead of the Praga category is the 29 of Chris Wesemael and Richard Morris, followed by the 111 of Richard Wells and Alex Kapadia and the 84 of Ed and Chris Bridle.