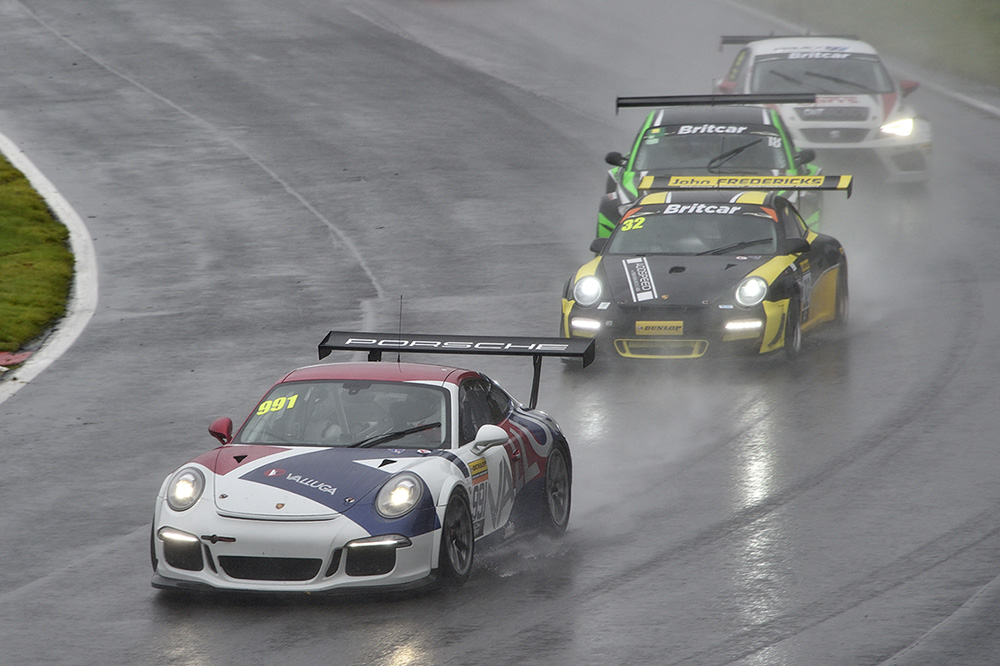 There was a strong sense of déjà vu about the result of Race 1 on the rain-blighted Island configuration of Oulton Park; Ian Humphries, driving alone in the Valluga Racing Porsche 991, played his single-driver status to his advantage, taking an early pit stop during a Safety Car period, and took a stealthy overall win. Sounds familiar? Well, Humphries did exactly the same at this same venue in Race 2 back in June, basically returning to the Championship in the same way he left it.

Not that he had it easy this time, though – a late-race charge by Sam Neary to recover the lead his father Richard had held in the Abba Racing BMW M3 up to the mandatory mid-race pit stops, ended in contact with the Porsche, which sent the BMW into retirement with deranged front suspension.

The Nearys had been part of a three-way fight for pole position, along with Humphries, and Andy Schulz in the SB Race Engineering Ferrari 488 he shares with Paul Bailey, during a soaking-wet qualifying session. Sam Neary’s potential pole time of 1:38.919, set as the flag fell, was pipped by just over a second by a last-gasp attempt by Schulz. Sadly, young Emily Linscott, having a first wet-weather experience in Peter Bassill’s Ginetta G55 aquaplaned into the barriers, causing a red flag interruption to the session, with the damage unrepairable.

The rain had abated, though the track was still treacherously wet when the Pace Car let the field go for the rolling start, and Richard Neary’s BMW got the jump on Bailey’s Ferrari into Old Hall, but the Ferrari hung on, and was in front until being caught-out by the conditions – the usually-cautious Bailey was bedded in a gravel trap at Cascades, and the Safety Car was deployed. Cue for the single-driver cars to make their mandatory stop, with VW Golf of title contender Ian Docker, and Humphries Porsche, both taking the opportunity. Bailey’s Ferrari was extracted, and he was straight back into the race with no messing around, though now a lap down. Starting late into the race during this caution was the VR Motorsport Praga R1T of Tim Gray, a sensor issue having been fixed, while Tim Docker’s masterplan was stymied by a drive-through penalty for allegedly starting out of position, Jeff Alden’s similar car also suffering the same fate.

Once the track went green again, Neary Snr’s BMW was unable to shake off Mark Cunningham’s Porsche, which was only just ahead of Kevin Clarke, in Mike Moss’s BMW 1M, and Max Coates, sharing Guy Colclough’s SEAT Cupra. Cunningham then had an off-track excursion, which dropped him down the order; "All the cars around me – the Valluga Porsche, Clarkey, the Abba car – all had ABS, and our car doesn’t, so I had to drive the way they didn’t have to, to keep up with them" explained Mark later. Tim Docker was also caught out by the tricky conditions, but recovered, compounding his issues.

Once the pit window was open, 24 minutes into the race, Paul Bailey brought the Ferrari 488 in, exactly to the regular plan, and handed over to Andy Schulz, who, rejoining now two laps down, had a bigger task than usual.

The lightweight "prototypes" in the field, the Sakers and Pragas, hadn’t figured in the opening stages, but now the two JPR Sakers, in the hands of Chris Hart and Paul Rose, became a marauding pair, picking their way through together. They came across Steve Burgess in the RAW Motorsport Ginetta G55, now in third place, at Old Hall corner; Hart’s green machine went through, but the un-settled Ginetta went wide onto the grass, spinning back onto the track and collecting the black Saker of Rose. The Ginetta’s front end was wrecked, and debris was strewn on the track, causing leader Richard Neary and the chasing Kevin Clarke to make sudden and drastic avoiding action, so the Safety Car was called again.

It was now around the halfway mark, so a pertinent time for mandatory pit stops, which the majority of the field duly took, and once the order settled, early-stopper Ian Humphries’ Porsche led the Abba BMW, now driven by Sam Neary, by six seconds, ahead of Mike Moss, in the BMW 1M started by Kevin Clarke, a further nine seconds behind in third. Moss had a spin, which delayed him around half a minute, while Andy Schulz was punching-in fastest laps in the Ferrari, and Sam Neary was getting closer to the leading Valluga Porsche. A challenge by the BMW ended in contact – the Porsche continued, but the Team Abba BMW was pitbound and into retirement with front suspension askew.

With no further challenges likely, Ian Humphries cruised for a further 11 laps to take another strategized Oulton Park overall victory (and the Class 3 win), with Moss, bringing down the gap to an eventual 12 seconds, the runner-up and Class 2 victor. This had been a sensational run for the unique 1M, trouble-free at last, allowing former champions Clarke and Moss to show their, and the car’s true potential. Steve Harris capitalised on Chris Hart’s early good work in the #4 Saker to take third place, and the Class 1 win. Teammates Paul and Kristian Rose recovered from the earlier accident to take the class runner-up spot, though down in 11th place, and third in class, the debuting Praga R1S of Al Boulton and talented series newcomer Jack Fabby, finished the race in a quagmire, while the regular Praga R1T of Tim Gray succumbed to engine concerns and was withdrawn from the rest of the meeting.

It wasn’t the best of races for the three title protagonists; Mark and Peter Cunningham’s Porsche couldn’t match the ABS-fitted cars in Class 3, and was beaten by the winning Valluga car, and by peripatetic journeymen Lee Frost and Lucky Khera, who had a solid race in the Simon Green-run Ginetta G55. Tim Docker’s advantage gained by pitting during the first Safety Car was quashed by the drive-through penalty, and a later spin – he finished third in Class 4, behind the winning DAT Racing SEAT of Max Coates (who hung on to the leaders in the early stages) and Guy Colclough, and the second-placed EDF Ginetta G50 of Paul Calladine and Graham Roberts, these two cars finishing an impressive fifth and sixth overall respectively. Points leaders Paul Bailey and Andy Schulz fared "less worse" than their title rivals, bagging second-placed points in Class 2, and Schulz claiming two more points for pole and fastest lap in the Ferrari 488. Two Sakers completed the Class 2 result – newcomer Steve Walton finished a commendable 10th overall in his first run in a JPR machine, while championship regulars Alan Purbrick and David Brise suffered gearbox actuation issues and finished down the order.

Lone Class 5 runners, VW Cup exponents Jeff Alden and Rob Phillips got to grips with a new style of racing in the Matrix Motorsport Golf, finishing 12th overall and picking up trophies for the Class win.