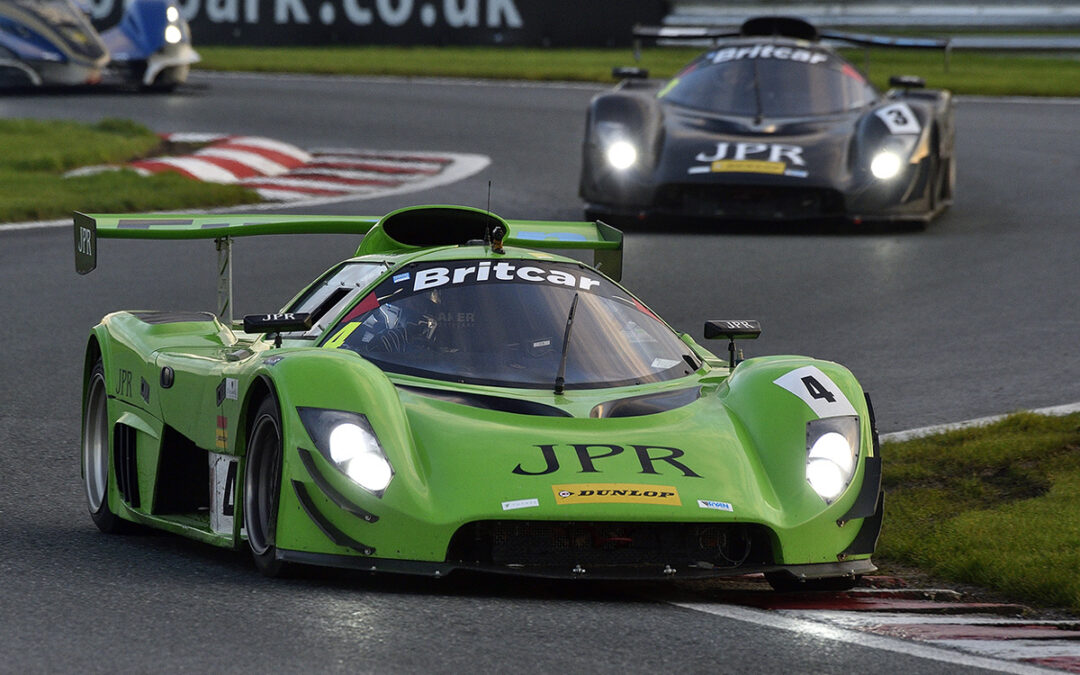 Chris Hart and Steve Harris, driving the vivid green JPR Motorsport Saker, took a convincing win on a still-wet track in the second race of the day.

Hart was the star turn of the first half of the race – blasting through from the second row at the rolling start, and challenging Mike Moss in the BMW 1M for the lead, which he took just two laps into the race. Once in front, the #4 Saker was never headed, not even when Hart handed over to Harris at the mandatory pit stop; with a lap over the rest of the field at that point, the gap was just around one minute when Harris rejoined, and he did a superb job of more or less maintaining that advantage to the flag, a performance which earned him Driver of the Day. Stable mate Paul Rose fared less well though, in and out of the pits several times before retiring the black #3 Saker, and denying Kristian Rose his turn in the driver’s seat.

The early order was Hart, Moss, Ian Humphries in the Valluga Porsche, and Graham Roberts in the EDF Ginetta G50, quick out of the blocks, though within a few laps he was swiftly dealt with by Mark Cunningham in the faster Class 3 Porsche.

With the conditions getting slightly better, though still tricky and with wet rubber still necessary, some of the faster cars that started down the order were making their way through – David Brise’s Saker up to sixth, Paul Bailey’s Ferrari up to eighth, and Jack Fabby, in the Invitation-entry Saker R1S ninth. Tim Docker was atoning for his Race 1 disappointment, his VW chasing Guy Colclough’s SEAT for second place in Class 4. Fabby passed Bailey, who wasn’t taking any chances, and who became the first to pit as 24 minutes of the race elapsed. Fresh tyres were fitted to the Ferrari 488 – more wets, not slicks – and Andy Schulz was on his way. Humphries pitted the Valluga Porsche from third, and once rejoined, dropped down the timing screen to false position that was only rectified a few laps from the end, when he re-appeared in a rightful fourth place.

Come the halfway mark, most took their mandatory stops, with Graham Roberts making a late handover to Paul Calladine in the EDF Ginetta G50, and Chris Hart really taking it down to the wire, just three seconds separating him from a penalty when he at last handed the leading Saker to Steve Harris. Max Coates, relieving Guy Colclough in the DAT Racing SEAT, went for a tyre change, slicks on the front, wets on the back, an old Touring Car trick which Coates would know about, according to veteran commentator Ian Titchmarsh.

The Cunninghams’ day didn’t get any better – Peter, having taken over from son Mark, was hauled in for a four-second stop/go, having taken a short pit stop, dropping the Porsche to eighth place, and the field looked settled to the end, with only third-placed Andy Schulz on the move, and unlikely to catch Kevin Clarke, who had taken over the BMW 1M from Mike Moss. But, oh, how wrong! Clarke had an atypical spin, and with a lap to go, the Ferrari was just three seconds behind the BMW, and in contention for the Class 2 win. Clarke used all his nous on his favourite track though, and just half a second separated the pair as they crossed the line, a minute after Steve Harris had taken the flag in the winning Saker.

Race 1 winner Ian Humphries was fourth overall in the Valluga Porsche, and there was redemption for ALP Racing – David Brise had a great opening stint in the Class 2 Saker, on which Alan Purbrick capitalised to bring it home fifth overall, completing the Class 2 podium, while Steve Walton completed his inaugural Britcar weekend by taking fourth in class in the JPR Motorsport Saker. Redemption too, for VR Motorsport, as Al Boulton, and Jack Fabby were sixth overall in the remaining Praga, a great feat for the young sportscar exponent in his first event in the car.

Mark and Peter Cunningham were Class 3 runners-up in the SG Racing Porsche, ahead of the Ginetta G55 of Lee Frost and Lucky Khera, who had a comparatively low-key race.

Class 4 went to the Calladine/Roberts Ginetta G50, a superb and faultless run to seventh overall, the pair are really making their mark now, and threatening the title aspirations of Tim Docker, who came home second in class in the Maximum Motorsport Golf. Max Coates’ tyre choice proved right, he set the class fastest lap on the slicks/wets combination, but couldn’t catch Docker at the flag. Local father and son Rick and Brad Nevinson made return to the series in the Track Focused Porsche Cayman, and had a steady race to fourth in class.

The overall title hangs in the balance and will be decided in the darkness at Brands Hatch in a fortnight’s time.