Oulton Race 1: Bailey and Schulz Waltz It In The Park 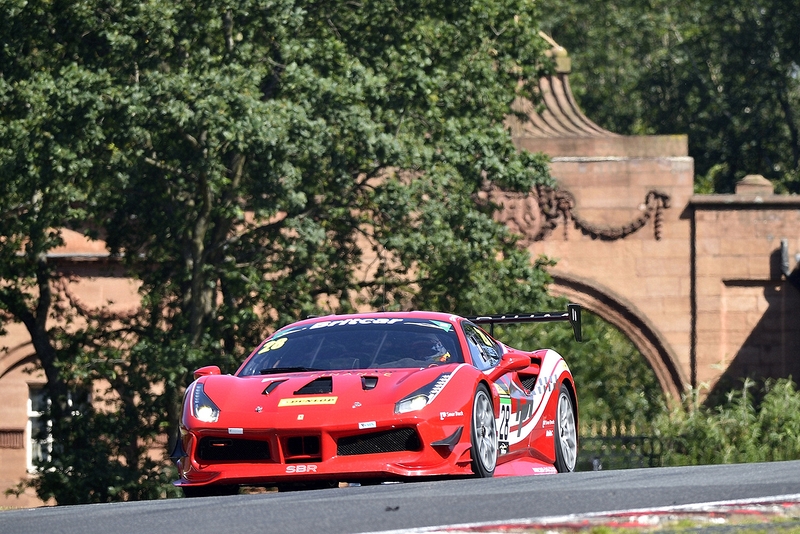 Another win for Paul Bailey and Andy Schulz I the SB Race Engineering Ferrari 488. There may have been doubters in the first third of the race, but those who understand strategy knew it would turn out fine.

Bailey took the opening stint, and as the red lights went out and the pack was let loose, the pole-sitting Ferrari took the slightest of paint-rubbing nudges from the fast-starting Saker of Chris Hart down the inside at the first corner, while Lucky Khera’s McLaren went around the outside, and into the lead. A lead that would sadly only last for five laps; a damper had broken, and with no replacement to hand, the Simon Green-run McLaren was out of the race, and the rest of the event. "I’m gutted, I thought it was a puncture, it’s not driveable" rued the unlucky Lucky. They could have been contenders.

This handed the lead to Chris Hart’s Saker, though team mate Paul Rose, running in the leading pack, was having issues, enduring a few slow laps before pitting with a cutting-out problem. Bailey’s gradual slip down the order wasn’t a cause for concern – most of his competitors had put their pro-driver in for the opening stint, so the Porsches of Ben Clucas, Mark Cunningham and Ian Humphries diced with lone-driver Mike Moss’s BMW 1M, while in Class 4, Max Coates SEAT had resisted the advances of Martin Byford’s similar machine, and despite Byford’s enthusiastic signature tail-happy style, he had to give best to returnee Kevin Clarke’s BMW M3 and Tim Docker’s VW Golf. Dave Benett was also having a good run in the Bespoke Cars Porsche 997, which ended prematurely when a broken driveshaft pitched him into a spin, and retirement. Already sidelined now, too, was Alan Purbrick, tackling the races alone this time, with a throttle issue in the ALP Racing Saker.

The on-form Mark Cunningham blotted his copybook with an atypical spin, flat-spotting all four tyres on the SG Racing Porsche, and taking the mandatory pit stop a little earlier than preferred. A long pit stop to change to tyres that weren’t exactly in prime condition effectively stymied Peter Cunningham’s chances of a class podium. Paul Bailey, in fact, had been the first of the heavy-hitters to pit, from fifth place, handing the Ferrari 488 to pro-driver Andy Schulz, along with the VR Motorsport Praga, not having the best of events, the boost problems being exacerbated by a gearbox issue in Grant Williams stint; star driver Tim Gray would now take it to the flag.

Late stoppers were leader Hart, handing the lime-green Saker to Steve Harris, second-placed Ben Clucas, being relieved in the Class 3-heading Track Group Porsche by Marcus Jewell, and Class 4 leader Max Coates, allowing Guy Colclough to take over the DAT Racing SEAT Cupra after a "sweaty stint", while the very last to take the mandatory stops were lone drivers Mike Moss’s BMW 1M, and Ian Humphries in the Valluga Porsche 991, both of whom had assumed the lead at respective points. Emily Linscott, having earlier taken over the Hedgehog Cyber Security Ginetta G55 from Peter Bassill, wisely made another quick stop to remove some scenery from the car’s radiator grille.

Once the field settled after the stops, Steve Harris was under attack from Andy Schulz, and once past, the red Ferrari began to pull out a decent lead, though Harris was struggling a little after the Saker’s rear diffuser went flying into the air on the pit straight, and had no answer to Tim Gray, who was using all his skill and experience to make the best of the Praga.

There were some bad endings as the clock wound down towards the hour – Paul Calladine, having pitted his Ginetta G55 very early and had a smooth run, was off the track and out of the race just 10 minutes from the end: "I don’t know, lack of talent or some fluid on the track – I was punching the steering wheel in frustration" he admitted later, and EDF stablemate Ashley Woodman was equally rueful, the BPM SEAT started by Martin Byford having understeered onto the grass and been launched by an unseen pothole. Game over for the luckless BPM duo.

So, with 34 laps on the board, Andy Schulz took the flag, posting the third overall win of the season in the SB Race Engineering Ferrari 488 shared with car owner Paul Bailey, securing the Class 2 honours in the process. Tim Gray was three-quarters of a minute back in the VR Motorsport Praga, taking the Class 1 win, just five second ahead of the JPR Motorsport Saker of Steve Harris and Chris Hart, which had dominated the early part of the race. Marcus Jewell brought the Track Group Porsche 997 started by Ben Clucas home fourth, taking the Class 3 win, ahead of the Valluga 991 of lone-driver Ian Humphries, while taking a class podium on their Britcar debut were Ginetta G55 pilots Emily Linscott and Peter Bassill, though Bassill’s excitable "one Porsche down, two to go" as the talented teenager passed Peter Cunningham’s 997 towards the end, was a tad ambitious!

Mike Moss, driving alone in his unique BMW 1M, had one of the car’s best runs this season, sixth outright and second in Class 2, while in Class 4, Guy Colclough did magnificently well to capitalise on Max Coates’ opening sweaty stint in the DAT Racing SEAT, as Tim Docker was unable to execute his trademark last lap lunge in the Maximum-run VW Golf. Third in class was the "scenery green" Porsche Cayman of Michael Price and Simon Clarke, having never lost touch with the front-runners in the class, and fourth was Kevin Clarke, having pitted late-race to change a ragged front-left tyre on the faithful Intersport BMW M3, returning after several seasons sojourn; "those tyres were seven years old, I could have gained around two seconds a lap round here on new rubber " he declared. That would have meant a possible class win. Quietly getting on with it were local father and son duo, former Britcar Sprint champions Rick and Brad Nevinson, fifth in class in the Track Focused Porsche Cayman, and Rob Baker drove around some niggles in his Smart 4/4 to claim the Class 5 win, while poor Sarah Moore never got into the race, the Tockwith Ginetta G50 expiring with diff failure on the out-lap to the grid.