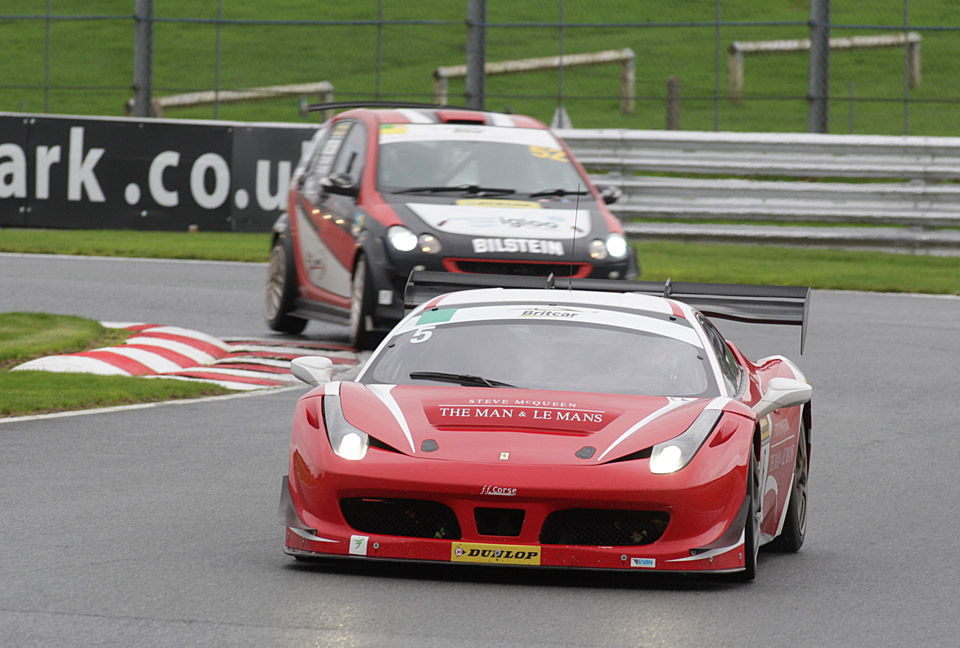 Bonamy Grimes and Johnny Mowlem, driving the FF Corse Ferrari 458 Challenge claimed the win in the first 50-minute Britcar Endurance encounter on a damp and squally early afternoon in the Cheshire parkland. Little change there, you might think, but this was a race of twists and turns (and no small amount of straight-lining), made interesting by a number of new entries.

The RAW Motorsport Radical RXC Coupe served notice of intent in qualifying, team boss Rob Wheldon consolidating new recruit Stefano Leaney’s earlier position of provisional pole, his best time of 1:50.674 in tricky conditions being just over a second quicker than Johnny Mowlem’s in the challenge-spec 458, with Ross Wylie, in Witt Gamski’s more powerful GTE-spec 458 variant a further second adrift. An earlier Free Practice session indicated that the Cunningham’s Porsche 997 and the stunning KTM X-Bow Coupe of Mike McCollum and Sean Cooper would be the ones to watch in Class 3, but the Black Mamba team threw a curved ball when it mattered, the Ginetta G55 of Chris Papageorgiou and Jayde Kruger annexing class pole ahead of Mark Cunningham, and the leading Team Hard G55, this time the one of Darron Lewis and series newcomer Adam Shepherd. Heading the Sprint category was series newcomer Mike Igoe, sharing his Porsche 911 with the vastly experienced Adam Wilcox, ahead of Class 4 frontrunners Ed Moore and Marmaduke Hall in the Tockwith Ginetta G50, and, though the session was red-flagged due to Katie Milner hitting the Armco at Lakeside, she still managed to bag the third-best Sprint slot in the Porsche 997 shard with Ollie Willmott. Class pole in a competitive Class 5 went to Rob Baker’s little Smart 4/2, the regular driver ably assisted by the precocious talent of Sarah Moore.

Wheldon made a quick getaway as the red lights went out at the start of the race (which saw midfield-qualifier Mike McCollum’s KTM X-Bow trailing at the back of the pack) and proceeded to eke out a substantial lead, followed by Grimes, Kruger, and a fast-starting Darron Lewis. Mark Cunningham was an early pit visitor with a steamy Porsche 997, the belt driving the water pump and power steering having snapped. Repairs were effected, and they rejoined, but with 12 laps lost, this was to be little more than a test session, and they were not classified finishers. Other early pit stops were made by Ollie Willmott, who’s Porsche had suffered accident damage to radiator – race over for them before he and Katie Milner could show their true potential – and Richard Woods’ Ford Focus, the first of several stops and eventual retirement due to fuel feed issues.

Wheldon’s domination at the front wasn’t to last, a trip into the barriers at Shell on the increasingly slippy track signalled an end to the race for the Radical Coupe. No Safety Car, but with 20 minutes of the race run, it was pit-stop time for many, and Bon Grimes relinquished the lead he had just inherited, handing the Ferrari 458 Challenge to Johnny Mowlem. Witt Gamski, fighting for grip in the more powerful 458 GTE machine, has pitted slightly earlier, leaving Ross Wylie a considerable task to claw back places from midfield. Of those maximising their stint lengths, was had a Ginetta-fest at the front of the field – Kruger’s Black Mamba G55 headed Team Hard stablemates Tom Barley And Angus Dudley, with the amazing Tockwith G50 of occasional racer Simon Moore now fourth, after surreptitiously creeping up the order whilst those around him floundered and straightlined chicanes in the tricky conditions – he was in second place by the time he handed over to Britcar’s very own Rob Hedley just as the pit stop window was closing.

Once the pit stops had been taken, Chris Papageorgiou’s lead in the Black Mamba Ginetta could only be considered as tenuous, given the more powerful machinery coming up behind him; Mowlem made short work of passing the Ginetta in the Ferrari, but had to contend with Adam Wilcox, who had taken over the red JMH Porsche from Mike Igoe, dispensed with Papageorgiou’s Ginetta, and perhaps sniffed overall victory. Mowlem responded though, showing he had enough tricks to pull out of the back if required, and the gap stabilised to 14 seconds as the flag fell after 50 difficult minutes, though the runner up spot for Wilcox was by no means secure, as Ross Wylie had mounted a terrific challenge in Gamski’s Ferrari, cutting through the pack from sixth place and a lap down to be just one second shy at the flag.

The Black Mamba Ginetta had been in the hunt from the start, and headed the Class 3 Endurance runners, ahead of the McCollum/Cooper KTM, which had mounted a superb recovery from the rear of the field, though the championship points were bagged by the three Team Hard Ginettas, line astern in the placings, the Lewis/Shepherd car being top of the group this time, followed by Rudd/Barley and Dudley/Hawkins-Row, then the Whitebridge Aston Martin, Phil Glew charging in the late stages after Chris Murphy’s solid opening stint. An early pitstop to investigate accident damage stymied Mike Moss and Scott Adam in the BMW 1M, and they trailed the class finishing two laps down.

With Igoe and Wilcox wrapping-up the Sprint overall and Class 3 victory, there were a raft of Class 4 Sprinters next down the line – young Adam Hatfield excelled in the Team Hard Toyota NGTC to take the class victory, ahead of the combined wisdom of Simon Moore and Rob Hedley in the Tockwith G50, though they were invitees, and the top points were bagged by Kristian Prosser and Simon Baker’s Moss Motorsport BMW M3, who beat the Ed Moore/Marma Hall G50 by less than two seconds. Dave Benett and Marcus Fothergill held it steady in their Porsche for second place in Class 3, though coil pack issues led to local heroes Rock and Brad Nevison being unclassified in the Track Focused Porsche Cayman, and impressive runs by the Oly Taylor/Tom Walker SEAT Cupra and the Andy Wilson/Peter Snowdon Monaro sadly came to nothing either. In Class 5 it was victory for Rob Baker and Sarah Moore in the Smart, with Roland Hopkins and Matt Boyce consolidating their great first season of racing with the runner-up spot in their VW Golf.