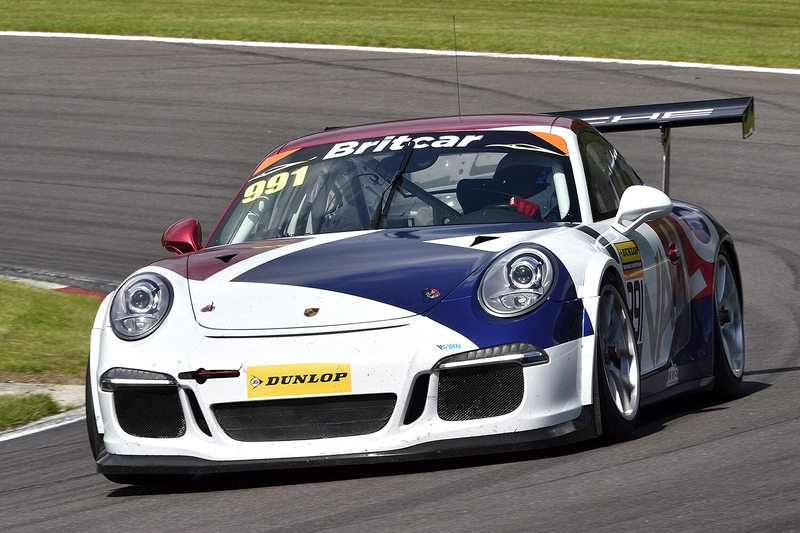 Ian Humphries, in the Valluga Racing Porsche 991, played the Safety Car intervention just right, to take the win in the second race of the day at Oulton Park.

That Safety Car came just five laps into the race, and lasted barely a couple of laps – the leaders broke the timing beam just once in the crocodile – and was deployed due to Guy Colclough’s SEAT expiring out on the circuit, by which time Moh Ritson had already parked-up the luckless Tockwith Ginetta G50 – no racing today for the Moore/Ritson combination.

Pole-sitter Paul Bailey went into the lead at the rolling start, but Chris Hart was on a mission, the green Saker taking the red Ferrari down the Avenue and into Cascades. Behind these two, it was frantic – Mark Cunningham, atoning for his Race 1 atrocity in the SG Racing Porsche, made up seven places on the first lap, and Paul Roses’ Saker was following him through, while Kevin Clarke, having now jumped in Mike Moss’s BMW 1M for an opening stint, was looking very racy in third. By lap three, though, Rose was once again out of the race, an engine issue that manifested in the preceding CNC Heads race having returned. Clarke’s BMW went from the front to the back of a close-coupled trio that was fronted by Bailey and Cunningham.

The lone drivers took advantage of the early Safety Car and pitted, as the regulations allow, the downside being a 50-minute unbroken stint would ensue. Ian Humphries’ Valluga Porsche, Tim Docker in the VW Golf, the Ginetta G50 of Paul Calladine, and later, Alan Purbrick in the ALP Saker, all took advantage, with Humphries, Docker, and Calladine all rejoining without losing a lap on the leaders.

Kevin Clarke was fast away once the caution was lifted, taking Mark Cunningham for second place milliseconds after they crossed the line, and the close order now was Hart, Clarke, Cunningham, Bailey, Marcus Jewell in the Track Group Porsche, Grant William’s Praga, and Michael Price, leading Class 4 in the Forelle Estates Porsche Cayman. And it wouldn’t be long before the pit window opened for the two-driver entrants. Jewell was first, handing over to pro-driver Ben Clucas, then Bailey’s Ferrari, then the Praga. Clarke, too, though he had slowed and virtually toured round to the pits, a handling problem now compounded with a throttle issue which caused the 1M to be retired after an encouraging outing – Kevin Clarke had shown the true capabilities of the machine. Peter Bassill, in his Ginetta G55, had moved up to fifth place when the leaders pitted, resisting the advances of the recovering Humphries, but now he pitted too, handing over to Emily Linscott, while leaving it right to the last knockings were Ruck Nevinson’s Cayman, Mark Cunningham, Michael Price and, finally, Chris Hart from the lead.

Once the race had settled after the stops, Humphries held a substantial lead, over a minute, which judging by the pace of the competition, and the time left to run, looked unassailable. There were two pro-drivers who thought otherwise, though; Andy Schulz, now in the Ferrari started by Paul Bailey, and Ben Clucas, having taken over the Track Group Porsche from Marcus Jewell, needed to dispense with one another to get a sniff of the leader, and this proved difficult. Just a few tenths separated them, lap after lap, with the Porsche ahead, and when they came up to lap Tim Gray’s ailing Praga, Schulz made a move, but just couldn’t safely pull it off. The intensity of the fight, though, was pulling them closer to Humphries, who after a metronomic performance eased off three laps from the end, before pulling-out a final banker that saw him finish just four seconds ahead of the charging Clucas, with Schulz a further four seconds adrift in third.

Benji Hetherington’s Valluga team had played the race just right, capitalising on the regs and strategizing enough to ensure Ian Humphries took the win without any late-race worries, while the two-driver teams of Clucas/Jewell and Bailey/Schulz battled supremely for position.

Schulz’s third place bagged the Class 2 win for the SB Race Engineering team, consolidating their status at the top of the championship points leader-board, while fourth overall for the Saker of Steve Harris and Chris Hart gave them the Class 1 victory, ahead of the VR Motorsport Praga, which had poor Tim Gray relatively limping around to eight overall, about nine seconds off the car’s true pace, with the boost issues worsening. Mark and Peter Cunningham’s Porsche claimed the final Class 3 podium spot, fifth overall, Mark’s performance earning him the Britcar Driver of the Day award, while finishing just off the class podium this time, though putting on an impressive show in their series debut, were Emily Linscott and Peter Bassill.

Class 4 – this was, after an early Safety Car pit stop, always going to be Tim Docker’s, though the Porsche Cayman of Michael Price and Tim Clarke gave Docker’s Golf a run for it’s money, just 10 seconds shy at the finish, with Paul Calladine’s Ginetta G50 a further seven seconds back, in a race of redemption which earned him the Sunoco Driver of the Day prize.

Alan Purbrick, unused to tackling the whole race alone, battled gamely in the ALP Racing Saker, finishing 11th overall and bagging second in the Class 2 result, while 12th were Class 4 returnees Brad and Rick Nevinson in their trusty Track Focused-run Porsche Cayman, and 13th – unlucky to have problems, but lucky to finish – was Rob Baker. He was the Class 5 winner, but suffered throttle problems in his Smart 4Four in the first race, and a dislodged dipstick in the second, which sprayed oil all over the engine.