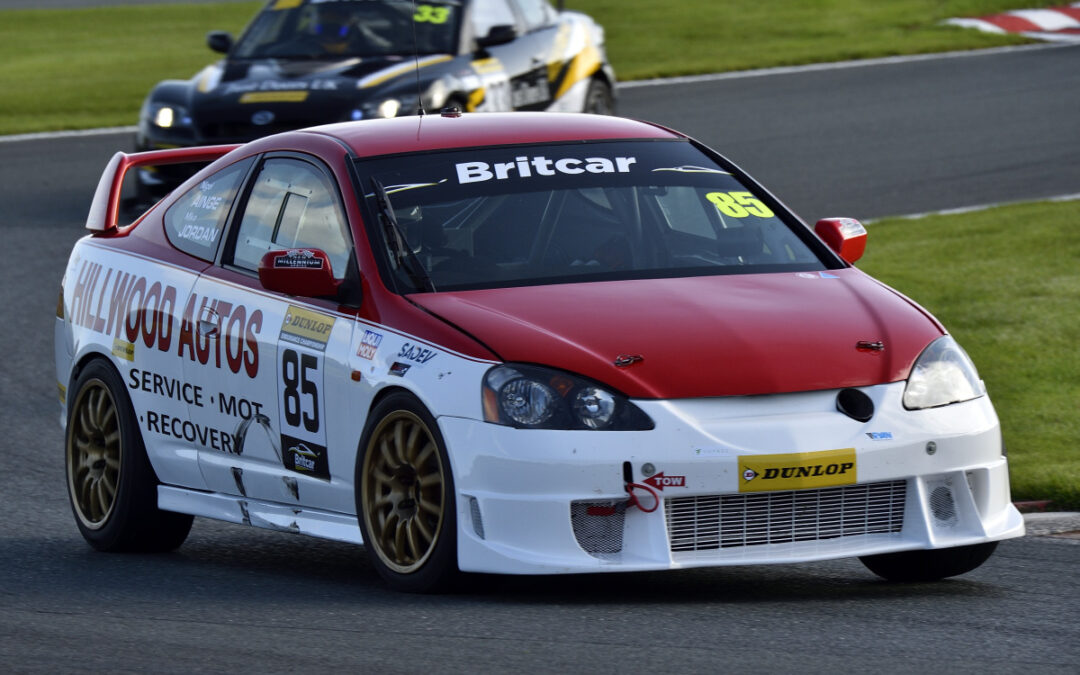 The Invitation entry Honda Integra DC5 Type R of Nigel Ainge and Danny Casser took the win in the 50-minute race, while second-placed Barry McMahon had to fight through some significant front-runners to uphold honours for the registered runners in his Alfa Romeo 156.

The Alfa had suffered fuel feed issues in qualifying, setting an atypical lap time that placed McMahon smack in the middle of the 20-car grid, and he was unsure if the measures he had taken would work – "We’ve drained the tank, flushed the system and put in new fuel, we’ll see if it works" he said just before the race. On pole was the Integra, Danny Casser having trumped Rob Smith’s time in the Peugeot RCZ by just under half a second as the session came to a close, while Jonny MacGregor’s Mazda RX8 and Oliver Smith’s BMW M3 made up the second row.

Ainge took the lead from the rolling start, but Rob Smith soon stamped his authority, extending his lead by a considerable margin over the 76 year-old Honda driver, who had a place-changing pack behind him, squabbling for third place – Kester Cook’s Fiesta, Oliver Smith’s M3, MacGregor in the Mazda, Richard Higgins’ Cayman, and McMahon’s fast-starting Alfa, his fuel issues obviously cured. McGregor was clearly struggling though, the Mazda’s drop to the back of the battling group mirrored by the rise to the top of it by McMahon, and once the order settled, Rob Smith’s Peugeot had a comfortable 16-second lead over the Alfa, which headed the still-close group of the "Kester Fiesta", Oliver Smith, and Nigel Ainge, while behind this group, Brad Kaylor, Anthony Higgins and Adriano Medeiros closely disputed sixth place. In Class 7, Alistair Lindsay’s Golf led, while Johnathan Barrett’s BMW and the Honda Civic of Edward Cook were tussling for position.

It came to an end for MacGregor just nine laps in – the Mazda RX8 pitting, into retirement with a broken exhaust downpipe, and strangely pitting for a driver change at the same time was the Clio of Aaron Thompson, handing over to dad Steve. Since this was slightly ahead of the pit window opening, the pair were given a post-race 150 second time penalty, demoting them one place in the order, though, being the sole runner in the Clio Class, they took the class win.

There were early retirements too for Robert Pugsley’s Cayman – previous results show he could have been a contender – and the Team BRIT BMW 116 of Luke Pound, the linkage on the car’s hand controls having failed, causing difficulty for Pound, who drives one-armed.

Ainge was the first to pit once the window opened, 20 minutes into the race, and so did Peter Spano, handing over the Ramen Racing Ginetta G40 to Andrew Bentley. Leader Rob Smith, and second-placed Barry McMahon pitted on the same lap – the gap when they came in was 20 seconds, and the gap once they were back on track again, and Charlie Campbell was in the Peugeot, had halved. Danny Casser, now driving Ainge’s Honda, had got the jump on the Alfa during the stops though, and, once late-stopper Richard Higgins, in the County Classics Porsche 996 had relinquished his inherited lead, and the race re-settled, Casser had a four second lead over McMahon, who was only a second ahead of the never-say-die Kester Cook, all pulling away from Campbell, while Richard Bernard’s Boxster sadly posted a retirement after a good run.

Danny Casser took the flag in the Class 6 Invitation entry Honda, posting 25 laps, 20 seconds ahead of Barry McMahon, who had to fight hard to keep Kester Cook’s Fiesta back in the closing stages of the race, the gap just half a second at the finish. These had been terrific performances from both drivers: McMahon cutting through the pack after a troubled qualifying session, and Cook – a hitherto unknown quantity and admitting to feeling nervous on his Britcar debut – showed skill and determination which earned him the Driver of the Day award.

Oliver Smith, punching above his weight as usual in the JC Racing BMW E36, was fourth overall and led the Class 6 points-scorers. Brad Kaylor would have been next up, after a late-race push in the Saxon Motorsport SEAT, but he retired just two laps from the end, leaving Charlie Campbell to complete the Class 5 podium, while Anthony Hutchins finished just off the class podium, eighth overall, in the Team IP/Antac Porsche Boxster. 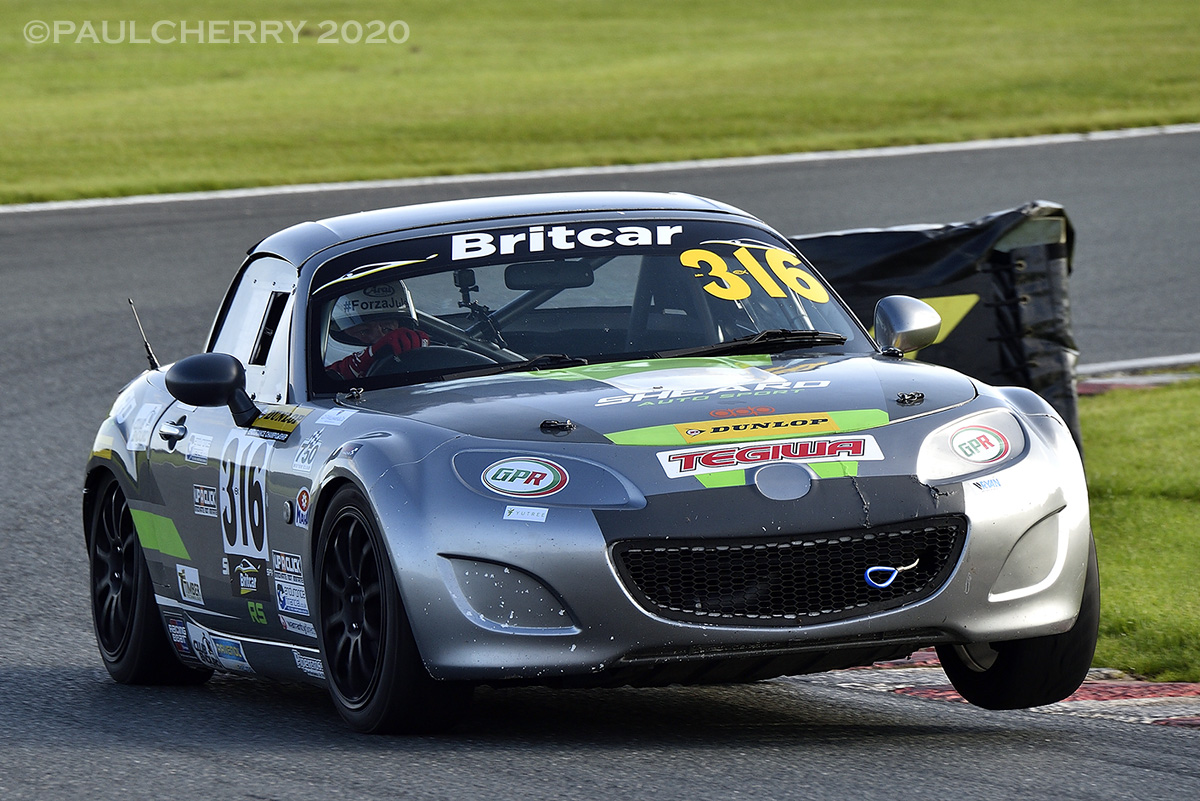 Richard Higgins was fourth in Class 6 in the County Classics Porsche 996, taking the runner-up points, ahead of the Vinna Sport Ginetta G40 Charlotte Birch and Adriano Medeiros, the former JSCC and G40 Cup contender complementing the consummate professional in keeping the car well-placed, while the similar machine of Peter Spano and Andrew Bentley was next up. Alistair Lindsay, always the front-runner in Class 7, took the Class win, with circuit commentator Nick Wood revelling in the "throaty roar" of the Saxon Motorsport Golf Mk2, with Saxon stablemate Johnathan Barrett’s BMW M3 a lap adrift, ahead of Ivor Mairs in the Paul Sheard-entered Mazda MX5, the Honda Civic of Steve and Edward Cook, and the Team BRIT BMW 116 of Andrew Tucker and Matty Street.

Going into the next round, Barry McMahon maintains his lead at the head of the overall and Class 5 points standings with 131 points, with consistency paying off for Class 6 leaders Charlotte Birch and Adriano Medeiros, second overall on 124 points, and, consistent again, Class 5 contender Anthony Hutchins on 118 points. Nobody else has breached 100 points yet, though Oliver Smith is close on 98, and Class 7 leader Johnathan Barrett claims 78, and Clio Class is topped by Steve and Aaron Thompson on 70. Dropped scores will come into play at the end of the season, which could change the positions dramatically – it’s all to play for in Trophy!