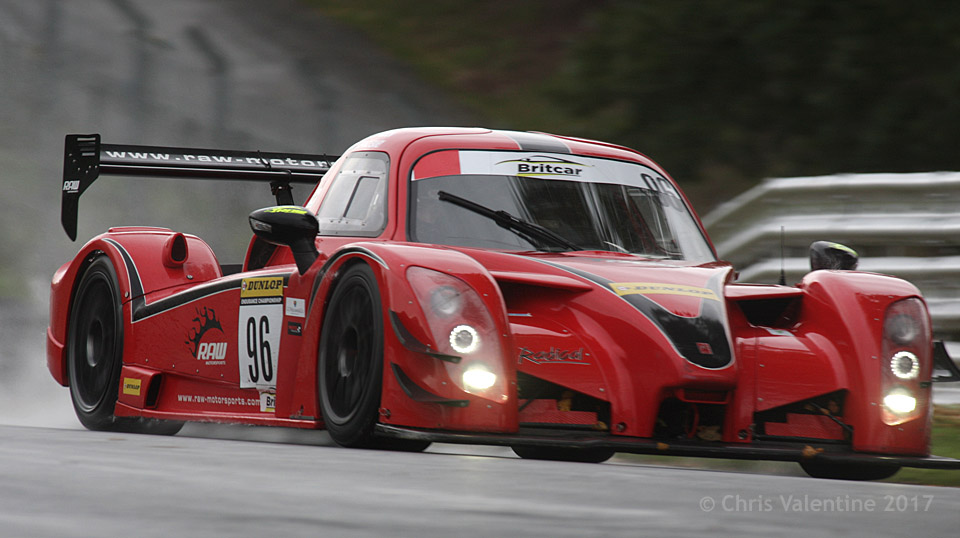 The damp and windy conditions on Oulton Park’s International circuit have thrown a curved ball into the qualifying session for this afternoon’s pair of races. At the top of sheers all the way through was the RAW Motorsport Radical Coupe, team boss Rob Wheldon consolidating co-driver Stefano Leaney’s earlier times to clinch pole at 1:50.264, comfortably ahead of the Grimes/Mowlem Ferrari 458, which itself had held the second spot from early in the session. The slippery conditions meant that the more nimble machines, predominantly Ginettas, held sway, until Katie Milner, an impressive sixth in the Porsche 997 shared with Olly Willmott, went off, bringing out the red flags, with 13 minutes to go. Katie is OK, and the car is repairable, and with the session resuming for eight minutes in wetter conditions, it was a big ask for some of the expectedly faster runners to make their mark. But they did – Ross Wylie punched in three flyers in Witt Gamski’s Ferrari 458 GTE to annex third on the grid, but Mark Cunningham, the best of the Class 3 points-scoring entries in the SG Racing Porsche 997, had to give best to Chris Papageordiou’s Invitation-entry Ginetta G55, which came from midfield to the second row. Class 4 pole went to the Ed Moore/Marmaduke Hall Ginetta G50, and the Moore family domination of class poles continued into Class 5, with older sister Sarah claiming the spot in the Smart 4/2 shared with Rob Baker. Mention must be made of Britcar’s own Rod Hedley, sharing a Ginetta G50 with Moore dynasty patriarch Simon, the pair starting 20th on the grid for the first of this afternoon’s races.