Jonny MacGregor was dominant in the opening 50-minute race, his self-developed Taranis taking a lights to flag overall victory.

You might have expected Ross Wylie to figure strongly in the Class 1 Sprint category, but the Scottish hotshoe was stymied by atypical concerns with the FF Corse-run Ferrari 458 he shares with owner David Mason, meaning the pair took to Saturday’s track action with a reworked machine as an unknown quantity. The usual pole position was out of Wylie’s reach this time, giving the best part of a second to the on-song Taranis. John Seale, having switched the running of his Ferrari 488 Challenge to JMH, made no secret of his aspirations; "I’ve got to beat the Igoe/Wilcox Porsche, I’ll do it one day". He didn’t do it in qualifying, being just a quarter of a second shy.

With a number of cars experiencing woes leading up to the race, and some new entrants, the grid line-up wasn’t typical, with some established runners out of their usual positions, and as the lights went out at the rolling start, Wylie and MacGregor were side by side along the straight and into Redgate, with the Taranis getting ahead through the Craners, and eking out a tenuous lead. Early pit stops for two Porsches – Dave Benett’s and Peter Cunningham’s – spelt trouble; Benett’s clutch had gone, and that was the end of his race, while Cunningham, driving alone while son Mark dealt with family issues, was struggling with a car stuck in fourth gear, but some further exploratory laps after some electronic intervention were no better, so his day was done too.

It wasn’t long before Wylie brought the second-place Ferrari in too – contact or an off had damaged the front left, and he began an in-out relationship with the pits, as the FF Corse team tried a number of methods to affix the front valance – cable ties, then riveting, and finally good old Gaffer Tape, before withdrawing the car to fix properly for Race 2. The first-ever retirement for a David Mason car in Britcar?

John Seale, meanwhile, was living-out his self-appointed challenge, getting on terms and even passing Micheal Igoe’s Porsche for what was now second place, though Igoe was having none of it and seized the place back within the same lap. And that little skirmish echoed the mood through the field – groups of cars locked in battle, which leader MacGregor had to negotiate as he lapped them. Kristian Prosser, though, was having a lonely race, running fourth in the Class 4 Moss Motorsport BMW M3, which was punching well above its weight this weekend – weight that was added-to when the car hit a fleeing rabbit, necessitating the team to clear out the luckless animal’s remains, including a leg, from the radiator grille when Prosser made his mandatory stop. "I felt a bump and saw a rabbit’s heads fly up in the air – I felt really bad about it for a while" said Prosser, explaining a momentary slight dip in lap speed.

Sadly, Ian Heward came to a halt out on the circuit with engine problems in the Porscheshop Porsche 911 RSR, and would go no further in the race. 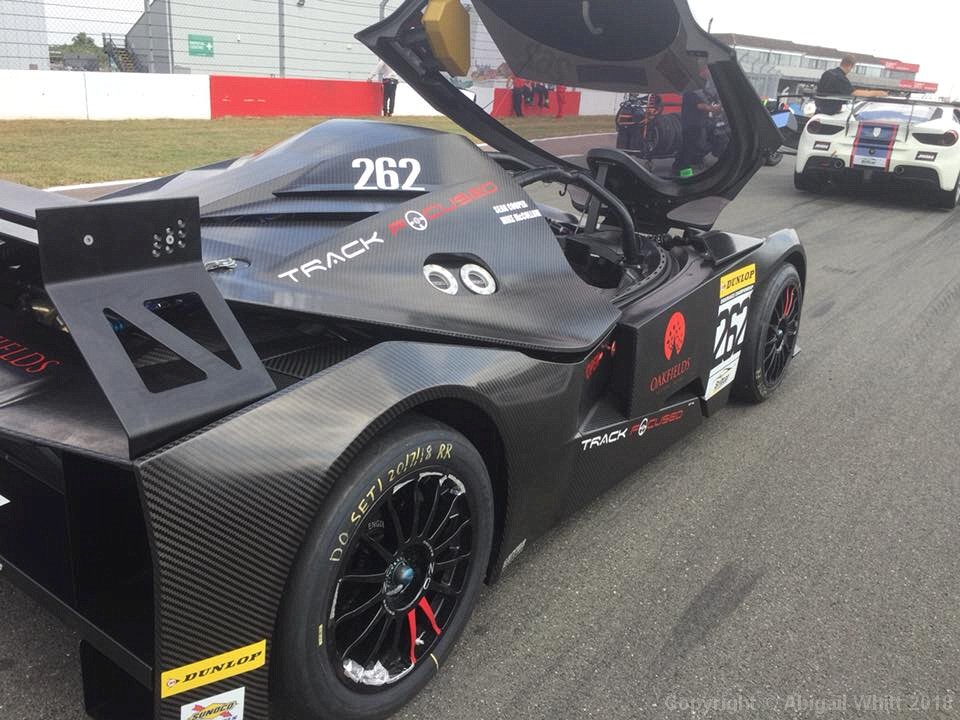 The two Track Focused KTM X-Bows were circulating in unison in the early part of the race – Mike McCollum’s regular entry being joined by new recruits Sandy and Ross McEwen, with son Ross taking the opening stint, and they had Ed Moore’s Ginetta G50 looking to break them up, though the Ginetta was retired later in the race shortly after Marmaduke Hall took over, overheating and brake issues troubling the luckless teenagers. Martin Byford, returning to the fray in Ash Woodman’s newly-re-liveried SEAT Cupra, was dicing with the similar machine of Rob Gilham, drafted in to partner John Clonis by regular pilot Chris Bentley, who was texting clear instructions and expectations from abroad.

After the mandatory pit stops were taken, lone-driver MacGregor had extended his lead to over 11 seconds, with now John Seale, who had got the jump over the Igoe/Wilcox Porsche, in second place. Pro-driver Adam Wilcox was on a charge though, allowing leader MacGregor to extend his lead while Seale kept his eye on the mirrors of his Ferrari. But time ran out, John Seale hung on and consummated his intentions to beat the Porsche, while Jonny MacGregor breezed home to an untroubled victory. A magnificent fourth overall, and Class 4 winners, were Kristian Prosser and Jon Watt, who had been the class of the rest of the field, topping the Class 4 contingent, despite the rabbit incident. Prosser held it together during the difficult opening laps, allowing Watt to capitalise on the car in a good position. Two star-drivers here, in the Moss Motorsport BMW M3 well-prepared by Woodrow Racing.

The first of the Endurance category came home fifth overall. It had been a troubled lead-up to raceday for Team Hard; The Darron Lewis/Adam Hatfield Ginetta G55 suffered a clutch problem, and new driver Sam Randon endured accident damage in the car he was sharing with Simon Rudd. With parts arriving from the team’s Strood base, plus a trip to Wickes for ad-hoc fabrication materials, the Team Hard crew burnt the midnight oil to get the cars race-ready. It was worth the effort though – following a cautious qualifying, Lewis hauled the #285 car from 17th to 12th before the pitstop, and Hatfield did the rest, wresting the lead from the KTMs, with the second-placed X-Bow of Mike McCollum/Sean Cooper finishing ahead of the Rudd/Ranson Team Hard G50, and the other X-Bow of series newcomers Sandy and Ross McEwen fourth in class, with newcomers Chris and Mika Brown, Super triathletes from Jackpot Racing were fifth in their new BMW M4, and the ever-improving Gleb Stepanovs partnered Matt Topham to sixth in the Newbridge Porsche Cayman. 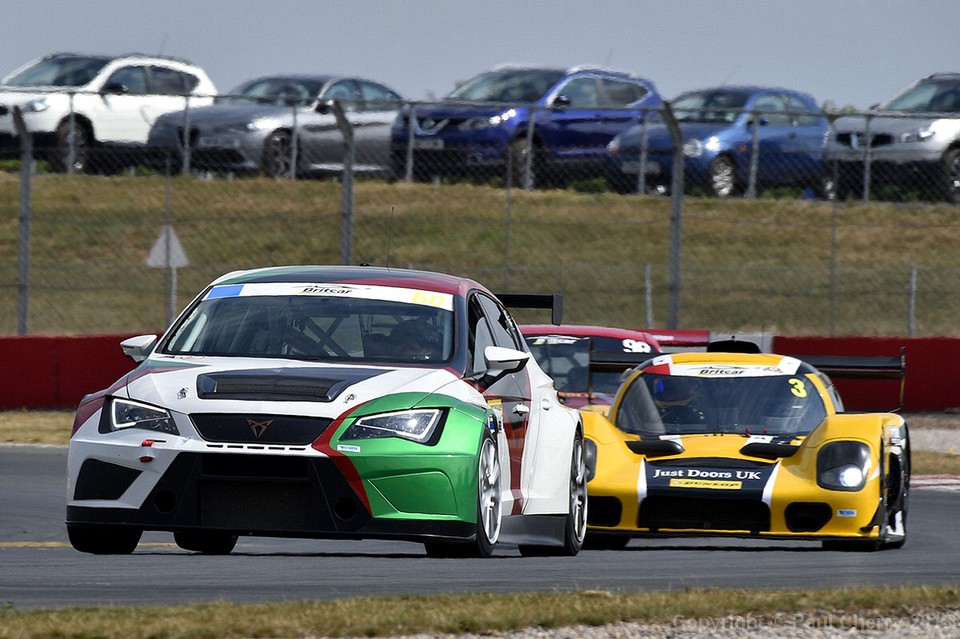 There may have been four race positions between Class 4 winners Watt/Prosser and their nearest rivals at the end, but a perusal of the lap times showed there wasn’t much in it; the Audi A4 of Alex Day and super-sub Luke Davenport claimed second after an impressive qualifying and race performance, whilst equally impressive was Rob Gilham, who handed the CTR SEAT Leon to John Clonis at the last possible moment, and third-in-class barely reflects his stunning drive. Tim Docker, erstwhile class points leader, was off the podium this time, his VW Golf coming fourth, with the remainder of the numerous class dispersed through the overall order; Sam Alpass rode the kerbs in his BMW M3, invitee Jasver Sapra had a solid run in his M3 liveried in fashionable filing-cabinet grey, as did Paul Calladine in his EDF-run Ginetta G50.

Butler Motorsport fielded two Ginetta G55s for arch-enthusiasts Lucky Khera and Lee Frost, the two Supercup regulars running as Class 2 invitees; they ran strongly midfield, with Khera not being so lucky, stopping early on for some panel damage to be taped up. The pair came to the fore as the race progressed, finishing ninth and 10th overall.

Lone driver Chris Murphy gave his usual understated performance, sailing to the Class 3 Sprint win in the Whitebridge Aston Martin, and it was a similarly understated race for the Tockwith Ginetta G50 of Sarah Moore and Matt Greenwood – with a crowded first couple of laps, Sarah decided that discretion was the better part of valour, and eased-off out of the pack after some near misses, then Matt had to nurse the car home to minimise the work needed by Nigel Moore and the TMS team between the races; 17th overall scarcely identifies their true potential. 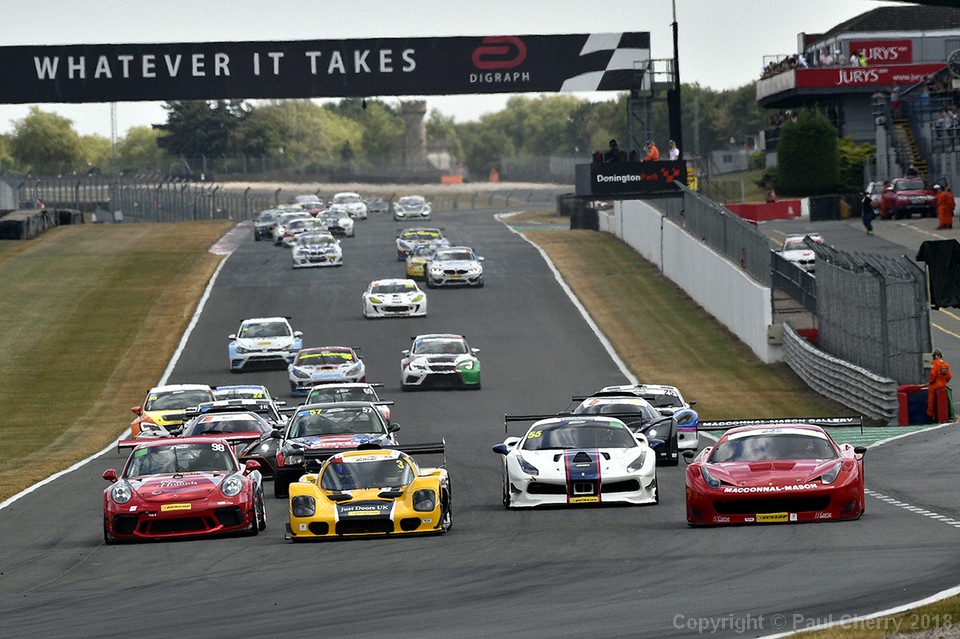 Another massive grid for Britcar with 32 entered for Round 4

Two late retirements were posted – Ash Woodman had been unhappy with his SEAT’s brakes all weekend, and had a trip into the McCleans barriers 10 minutes from the end, while poor Guy Colclough pitted on the very last lap with a puncture on his SEAT Leon, and was cruelly posted as a DNF.