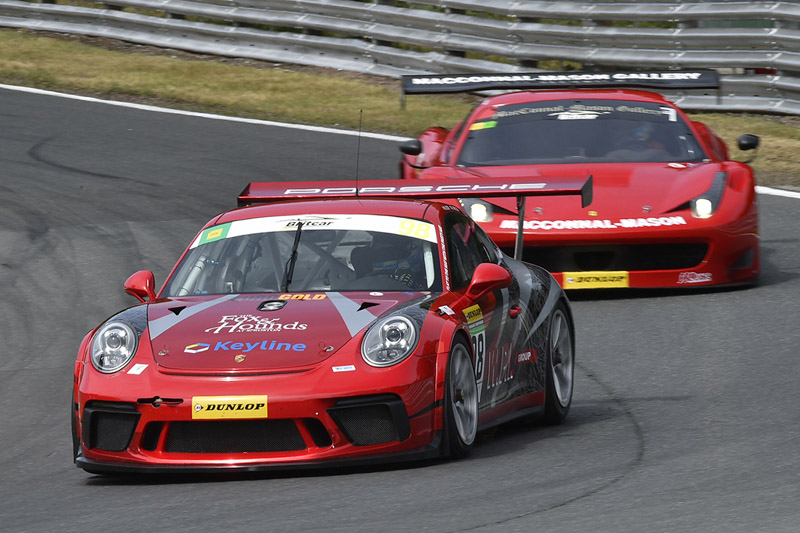 Just as you think the championship is settling into a pattern, the circuit, the circumstances – the gods even – throw a curved ball and mix things up. This was a day of surprises, some pleasant, some not so, in the sunny Cheshire parkland.

At the front, it was business much as usual – Richard Neary took the Sprint category win in the opening 50-minute race, maintaining his 100% record, while Mike McCollum and Sean Cooper, in local team Track Focused’s KTM X-Bow laid down a marker by claiming victory in the Endurance category.

A trio of Sakers dominated the early part of the 30-minute qualifying session, the regular Alan Purbrick/Tony Brise entry joined by marque specialists Paul Rose and Steve Harris on day-trip from the CNC Heads races on the programme undercard. The session was red-flagged 12 minutes in, unlucky Ben Seyfried hitting a "sausage kerb" which saw the EDF Aston Martin airborne and land heavily on the front right corner; no bodywork damage, but underneath just about everything metallic was bent, broken or cracked, meaning their day was over.

The re-start of the now-truncated session saw the regular heavy-hitters make their mark, with Ross Wylie and Adam Wilcox annexing the front row, though Richard Neary took a while, having a time disallowed, and eventually headed the second row, with the Moss/Howard BMW 1M alongside.

Ross Wylie converted the FF Corse Ferrari 458’s pole to the lead at the start of the race, and built a healthy gap on the opening lap, with Micheal Igoe’s Porsche 911 three-seconds behind, and under pressure from Richard Neary’s Mercedes, which seized the place next time round, leaving Igoe to fend off Paul Rose’s Saker.

Early pit-stoppers included Chris Murphy’s Aston Martin and Paul Calladine’s Ginetta G50, both single-drivers getting their mandatory stop out of the way, and sadly, Alyn James, bringing the much-improved Synchro Honda Civic Type R in to retire with a snapped damper, for which a replacement part is long overdue on back-order. The field began to spread-out into individual tussles – Mike McCollum’s KTM chasing Darelle Wilson’s Astra, Mike Moss getting on terms with BTCC refugee Mat Jackson in Stewart Lines’ SEAT Cupra, returnee Christie Doran’s Golf dicing with Rob Baker in the Smart 4/4, some local rivalry between Brad Nevinson’s Cayman and Richard Woods’ Ford Focus, and importantly, Paul Rose, who’s Saker was on the tail of Igoe’s Porsche. There was slight contact as Rose got close at Old Hall, tipping the Porsche out of shape but recovering, while the Saker itself span.

By this point Richard Neary had already pitted the Mercedes, shortly after his 16-year old son Sam, in his first senior race, had pitted HIS Tockwith Ginetta G50. Also making a pit visit, though not planned, as Darelle Wilson, the Astra crawling in with steering damage that would end the car’s race. Most took their stops around the halfway mark, some attracting a stop/go penalty for short-stopping below their mandatory time, Adam Wilcox, Tom Howard and Paul Rose among the miscreants. Wylie was the last to stop, handing the leasing Ferrari over to David Mason, and from here the race took a different complexion. Stewart Lines had inherited the Maximum Motorsport SEAT Cupra from Mat Jackson in a healthy position, but was back in the pits barely a lap after taking over, and broken engine mount having ripped the gearbox out of place – game over after a giant-killing performance from Jackson. This was the start of a spatter of late-race retirements; Tom Howard’s Moss Motorsport BMW 1M with throttle motor issues, Matt Greenwood, in the Tockwith Ginetta G50 started by Sarah Moore, suffering from a dislodged belt from a thrown-up stone, and Christie Doran, who parked the Golf at the end of the start-finish straight with overheating issues, bringing out the yellow flags there for the final few laps of the race.

And so Richard Neary took another Sprint win in the Team Abba Racing Mercedes GT4, keeping a watchful eye on the gap back to Adam Willcox’s Porsche 911, which sealed the Class 2A victory, ahead of Paul Rose, who’s spirited drive in an unfamiliar championship earned him third overall in the Saker, though team-mate Steve Harris, who was equally impressive, squandered a good finish by stopping out on the circuit on the final lap. The points-scoring Saker of Alan Purbrick/David Brise was third in class, fifth overall, a finish reflecting the duo’s performance at last, and they were just behind David Mason’s Ferrari 458, which had dropped down the order towards the end.

The Endurance category runners didn’t feature at the front-end of this race – Class 3 protagonists Mike McCollum/Sean Cooper in the KTM finished 17 seconds ahead of Simon Rudd/Tom Barley in the Team Hard Ginetta G55, with team mates Darron Lewis/Adam Hatfield third, with local specialists Rick and Brad Nevinson’s Porsche Cayman in 18th place overall, though both father and son had been involved in some entertaining on-track battles throughout the race.

Lone runners in the newly-separated Class2B, Marcus Fothergill and Dave Benett, took their Porsche 997 to 11th overall, while lone Class 3 Sprint runner Chris Murphy was down to earth after Le Mans, 13th overall in the Whitebridge Aston Martin Vantage.

Class 4 had the biggest entry, and saw the Ed Moore/Marmaduke Hall teenage combo make the race at last this season, Moore punching well above his weight in the Tockwith Ginetta G50, beating the newer G55 models, though Marma Hall had to resist Simon Rudd’s advances in the closing laps. Jon Watt and Kristian Prosser are proving a handy combination in the heavily-sponsored Moss Motorsport BMW M3, and they were second in class, ahead of father and son duo Rob and Alex Day, in the ex-Rob Austin BTCC Audi A4. Series newcomer Guy Colclough was next up in his SEAT Cupra, followed by Paul Calladine’s Ginetta G50, the impressive Sam Neary, the Chris Bentley/John Clonis SEAT Leon, and an off-form Tim Docker in the class points-leading VW Golf.

It was good to see some Class 5 entries return to the track after an absence, and local heroes Richard Woods and Mark Wakefield bagged the class victory in their Ford Focus, with old hand Rob Baker, with teenager Lucas Nanetti brought the world’s most powerful Smart car home second, with courageous Andy Napier third in his Lotus Elise.

There would be a fair bit of repair work for some team before the second race of the day.