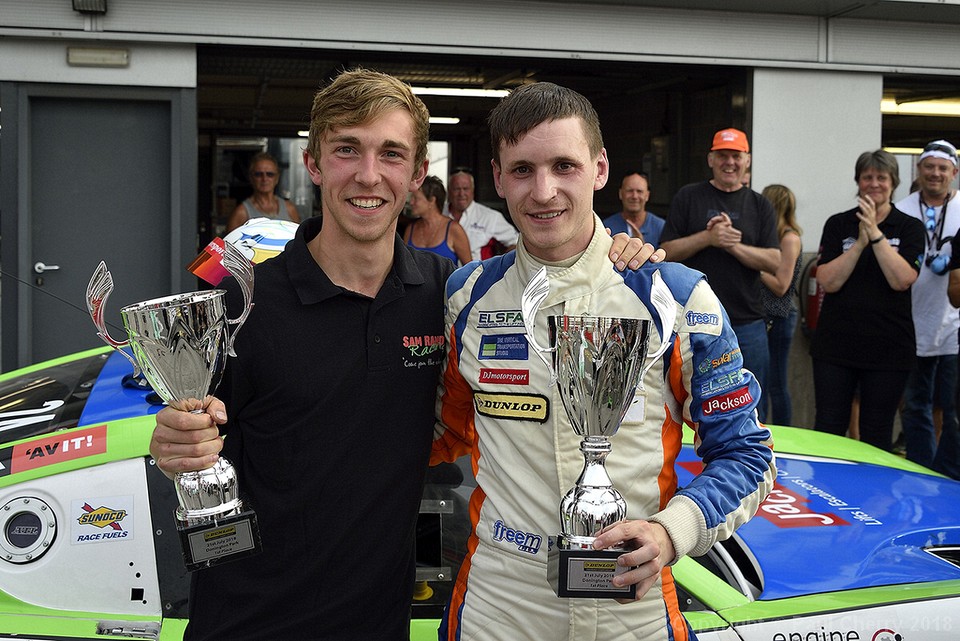 Once again, Jonny MacGregor took the Sprint win in the MacG Racing Taranis, though he had to give best early on to a fired-up Ross Wylie in David Mason’s FF Corse Ferrari 458. In the Endurance category, Team Hard’s Simon Rudd, partnered by Sam Randon in the Ginetta G55, took an emotional overall victory.

This was a race of mixed fortunes, with some potential front-runners left by the wayside, and some stellar recovery drives.

The Butler Motorsport trio were sitting this one out, and sadly Ash Woodman’s SEAT was missing too, a fire extinguisher incident preventing them from taking the start, and it was MacGregor that took the lead from lights-out, with John Seale’s Ferrari and Michael Igoe’s Porsche disputing second place. Starting from the back row, Ross Wylie, and Marcus Fothergill, in a just-in-time repaired Porsche, had some work to do. The preceding Truck Racing sessions had left an oily track, and Seale’s attempt to take Igoe at the chicane may have worked ordinarily, but here he was caught out, and there was contact from which both recovered immediately, though Seale’s Ferrari then went straight on into the Redgate gravel, a holed radiator signifying the end of his race.

The opening laps were frantic and eventful – Marcus Fothergill squandered his fast start from the back of the grid with a spin at the chicane – it was slippery down there – but carried on, while Ross Wylie was carving through the field rapidly. Ed Moore retired the Tockwith Ginetta G50, Kristian Prosser went missing in the Moss Motorsport BMW M3, and wouldn’t re-surface until just before the end of the Sprint part of the race – he had been parked up against the fence on the far side of the infield with total electrical failure, unseen by the circuit CCTV, with no radio, and no marshals post on that side of the track, thus denying another giant-killing performance from himself and Jon Watt. "Should have kept that rabbit’s foot we collected in Race 1" rued team boss Mike Moss.

By lap six, Wylie had the Ferrari on the tail of MacGregor’s Taranis, and by lap 10 he was in the lead, exorcising the demons of the first race. Triathlete Chris Brown had collected a puncture early on in the Jackpot Racing BMW M4, and was crawling round the circuit extremely cautiously – there we several near misses before he finally made the pit lane, having been lapped four times by the leaders. 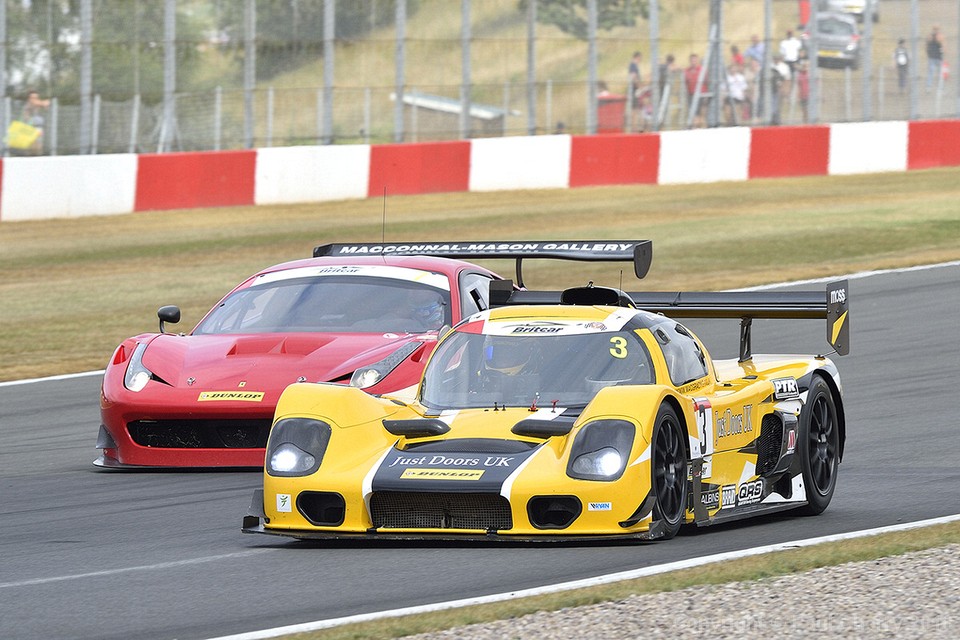 Darren Lewis was leading the Endurance category in the #285 Team Hard Ginetta G55, under pressure from Mike McCollum’s KTM X-Bow, but soon the Ginetta was out of the race with rear end damage. Similarly Paul Calladine’s G50 was on the grass by the chicane and would go no further, with Richard Woods’ Ford Focus also a retirement, ending the HSG Sports team’s run of recent success. McCollum’s KTM had problems too – damaged front suspension, straight into the garage, with the team feverishly searching the parts bins for replacement components.

The Safety Car was deployed to facilitate a clear-up of the stranded cars, sadly just after the majority of the Sprint runners had taken their mandatory stops, with only lone driver MacGregor, now leading, able to take advantage of pitting under the caution.

The caution was lifted with just eight minutes to go in the Sprint race, and Jonny McGregor cruised to the flag in the Taranis, the best part of a lap ahead of Adam Wilcox, who had taken the WPI Porsche over from Michael Igoe for the final stint and had seized second place from David Mason on the penultimate lap. Mason was third in the Ferrari 458 started by Ross Wylie, a reasonable result given their earlier problems, and fourth overall, heading Class 2B, was the star drive of the race – Dave Benett, in the Bespoke Cars Porsche 997, crossed the line just a lap adrift of the leader, capitalising on the earlier stellar performance of Marcus Fothergill, who hauled the car up into contention from stone-last on the grid, a performance which earned him Britcar Driver of the Day, and a testament to his skill and tenacity, and that hard work of the Tockwith team to replace the clutch between the races. 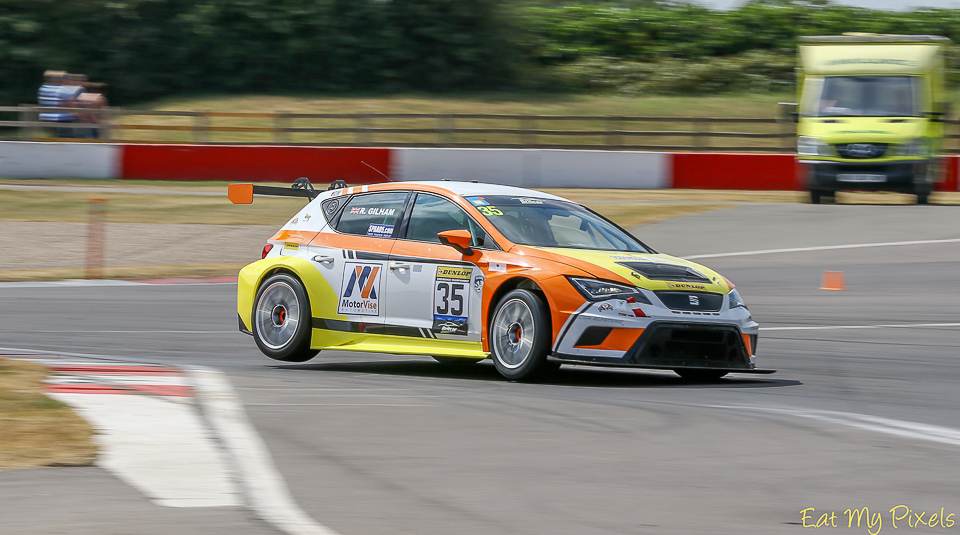 Tim Docker resumed his place at the head of Class 4 in the Maximum Motorsport Golf, five seconds ahead of the SEAT Leon of John Clonis, who had benefitted from first-stinter Rob Gilham’s great drive. Such was Gilham’s performance in the car, he was nominated as Sunoco Driver of the Day. The Audi A4 of Alex Day and Luke Davenport was third in Class 4, with Davenport taking the fastest lap towards the end of his closing stint. In this class packed with variety, Sam Alpass’s BMW M3 and Guy Colclough’s SEAT Leon met the challenges and had solid runs. Sole class runner Chris Murphy (Class 3 Aston Martin) gave his usual reliable performance, and Andy Napier toughed it out to take the Class 5 honours in his Lotus Elise.

The Endurance section of the race was still running, and with just over 40% of that race on the clock, the mandatory pit stops began; Gleb Stepanovs, running second, handed the Newbridge Cayman over to Matt Topham, then Chris Brown, handing the Jackpot Racing BMW M4 to son Mika, and lone driver Alyn James brought the Synchro Motorsport Honda Civic Type R in with a tyreless left rear rim.

Sam Randon pitted the #24 Team Hard Ginetta G55 from the lead, a turnaround in fortune from the earlier race, and Simon Rudd rejoined, maintaining a two-lap advantage. Refuelling issues caused a long pit stop for the Sarah Moore/Matt Greenwood G50, dropping Greenwood behind Sean Cooper, who had taken over the now-repaired #262 KTM for the closing stint. There were track-limit time penalties for Synchro Honda, and the KTM of series debutantes Sandy and Ross McEwen, though that didn’t hinder veteran racer Sandy’s progress to second place as the race drew to a close.

So it ended, a challenging race in uncomfortably hot conditions and a slippery track. Simon Rudd, a season and a half into his Britcar campaign, took an emotional overall win for Team Hard, assisted in no small way by the redemption of Sam Randon’s solid opening stint. The McEwen’s KTM X-Bow was second, a fine endorsement of theirs and the marque’s competitiveness; they had overtaken Matt Topham’s Newbridge Porsche Cayman that was started by ever-improving Latvian Gleb Stepanovs, the pairing taking the Class 4 victory (a great encouragement for Topham, who is embarking on an endurance campaign after several successful seasons in Caterham racing), and despite that earlier puncture for the BMW M4, Chris and Mika Brown took the final podium place in Class 3; these ace triathletes know about endurance – Chris preserved the car well during the puncture incident, and their skills and mindset paid off. Alyn James, lone driver and lone Class 5 runner in the Synchro Civic, nevertheless ran it as always like a competitive race, collecting the class winner’s cup, and 13 laps down after replacing suspension components, Mike McCollum and Sean Cooper were seventh in the KTM, a lap ahead of Sarah Moore and Matt Greenwood, who nursed a troublesome Ginetta G50 to the flag.

There’s a long summer break now before the Championship regroups at Snetterton on September 8th.