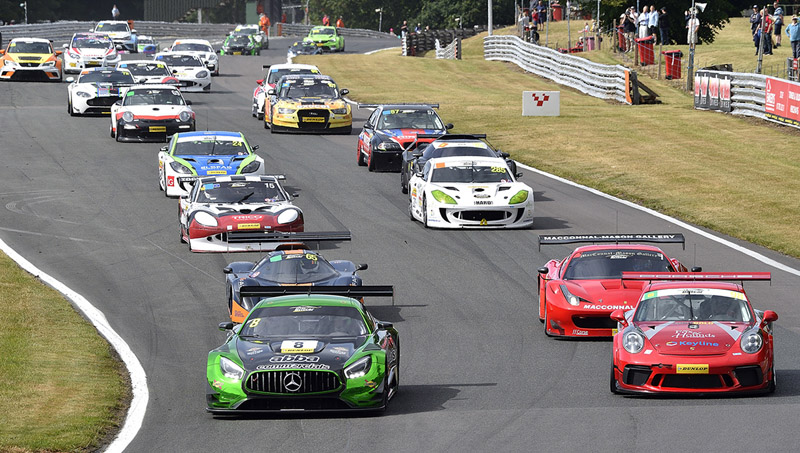 Richard Neary once again clinched victory in the Sprint category, while the locally-based Track Focused squad took an ecstatic win in the two-hour Endurance race.

Some of the teams had worked hard to get the cars ready after issues in Race 1 – major repairs for the Maximum Motorsport SEAT Cupra, work on the Moss Motorsport BMW 1M, and a heroic effort by Nigel Moore and the Tockwith team to get a just-in-time delivery to the assembly area for the Sarah Moore/Matt Greenwood Ginetta G50.

Neary’s Mercedes headed the field into Old Hall at the rolling start, closely followed by Igoe’s Porsche, with Wylie’s Ferrari anxious to get by them both. One lap is all it took to dispose of Igoe, then a further two to take the leading Mercedes unsullied through Old Hall, Neary no doubt informed by history how things were likely to pan out. Behind the top three, David Brise’s Saker was ahead of a racy Endurance trio, Tom Barley getting his Ginetta G55 ahead of Mike McCollum’s KTM, with Darron Lewis completing the train in the second Team Hard Ginetta G55. Mike Moss was an early pit visitor, the diff on the BMW 1M having given up, and then there was a spate of retirements; Tim Docker parked his VW Golf on the grass at the exit to Old Hall, Darron Lewis came to a halt with gearbox failure in the Ginetta, and Alex Day, running an impressive ninth overall in the Class 4 Audi, suffered brake failure and had a lurid trip across the scenery before crawling back to the pits to retire.

The Safety Car was deployed, and this would be a game-changer for the Sprint contingent, for good and for bad. Just seven laps into the race, just a little too early for the two-driver Sprint runners to take their mandatory stop, but fine for the singleton drivers, who took the opportunity. So did Ross Wylie, bringing in the Ferrari for David Mason to take over, knowing that he would have to get back in for a few minutes only before the 50-minute race ended. This was a move that didn’t really pay off. With so many cars pitting, the Safety Car train became uncoupled, with cars rejoining randomly and able to dictate their own pace to catch up. As the five-lap caution progressed, the window opened for the two-driver cars to pit, and depending on where you left, and where you rejoined, there would be winners and losers, particularly as this came at a stage when the Safety Car was doing fairly slow laps, some just sub-four minutes.

For the Endurance runners, this was way out of the pit window, and thus, by dint of not pitting, Mat Jackson now headed the field in the Maximum Motorsport SEAT, having carved his way through the field after a pit-lane start.

Once the caution was lifted, the winners and losers emerged. On the winning side, Marcus Fothergill in the Porsche started by Dave Benett made six places, David Mason’s Ferrari was stuffed mid-pack in 12th place, and Alan Purbrick in the Saker, down to ninth after David Brise had been running fourth in his opening stint. How come – who knows? The vagaries of the Safety Car.

Working his way up though, was Jon Watt in the Moss Motorsport BMW M3. Started by Kristian Prosser, and seemingly unsullied by the Safety Car, Watt was setting the track alight, setting the Class 4 fastest lap as he picked-of the Saker, and causing Fothergill ahead of him to mount a solid response.

Ross Wylie took over Mason’s Ferrari for a final five-minute dash, setting the race’s fastest lap as he reclaimed a few positions, but is was Richard Neary once again who triumphed in the Sprint race, with Adam Wilcox’s Porsche a little closer behind this time, sealing the Class 2 win once again. Two stunning class results were high-up in the overall order – Class 2B going to the stalwart Fothergill/Benett pairing, and Class 4 claimed by Jon Watt/Kristian Prosser, upholding honours for Moss Motorsport, with the Purbrick/Brise combination bagging Class 2A in the Saker, somewhat confused with the Safety Car dilemma.

Wylie’s last-ditch attempt recovered the FF Corse Ferrari to seventh overall, sandwiched between a raft of Class 4 runners; Ed Moore and Marmaduke Hall took the Tockwith G50 to the class runner-up spot, with a back-to-form John Clonis and Chris Bentley claiming the final podium spot in the CTR-Alfatune SEAT. After a cautious start by Oliver Willmott, Darelle Wilson wrang the neck of the Astra, but missed out on the podium, ahead of the Ginetta G50s of Paul Calladine and Sam Neary (another solid job by the teenage novice), and Guy Colclough’s SEAT. Lone Class 3 exponent Chris Murphy brought the Whitebridge Aston Martin home 13th overall, as he did in Race 1, and in Class 5 it was another popular local win for Richard Woods and Mark Wakefield in the HSG Sport Ford Focus, redemption for the trying time they had last year, with Andy Napier’s Lotus Elise second, and the Baker/Nanetti Smart 4/4 third.

But there was still an Endurance race going on; just five cars left after earlier attrition, but the top three of those – Mat Jackson’s SEAT, Tom Barley’s Ginetta G55, and Mike McCollum’s KTM X-Bow, were together on track, separated by just a few seonds, with Sarah Moore’s G50, and the Cayman of Rick Nevinson on the same lap. Mandatory stops were taken, much around the same time, by all except Jackson, who ploughed on in a healthy lead. He ploughed on a bit too far before handing over to Stewart Lines in fact, and with an apparent misunderstanding of the maximum stint regulation, the men in serious blue shirts analysed the data, and disqualified the Maximum Motorsport SEAT, a cruel blow to the efforts of the race engineers who laboured to get the car fixed for the second race.

The remaining quartet carried on, Simon Rudd in the Team Hard G55 keeping Sean Cooper’s KTM honest for a while, and as the race drew to a close, the ecstatic Track Focused team performed some kind of celebratory ritual dance on the pit wall, before Sean Cooper crossed the line in a theatrically-staged finish with the KTM just ahead of and alongside stablemate Brad Nevinson’s Porsche Cayman, which had, as usual, given a stirring performance with some entertaining tussles, and completing the Class 3 podium. This had been a well-deserved win for the local heroes based in Ellesmere Port, their outstanding performances at last rewarded with an outright win.

Thanks to the heroic efforts of Nigel Moore and the Tockwith team, Sarah Moore and Mat Greenwood repaid the compliment with third overall, and the Class 4 win, in the Ginetta G50, and despite expiring on lap five, Darron Lewis and Adam Hatfield were still classified in the Team Hard Ginetta G55.