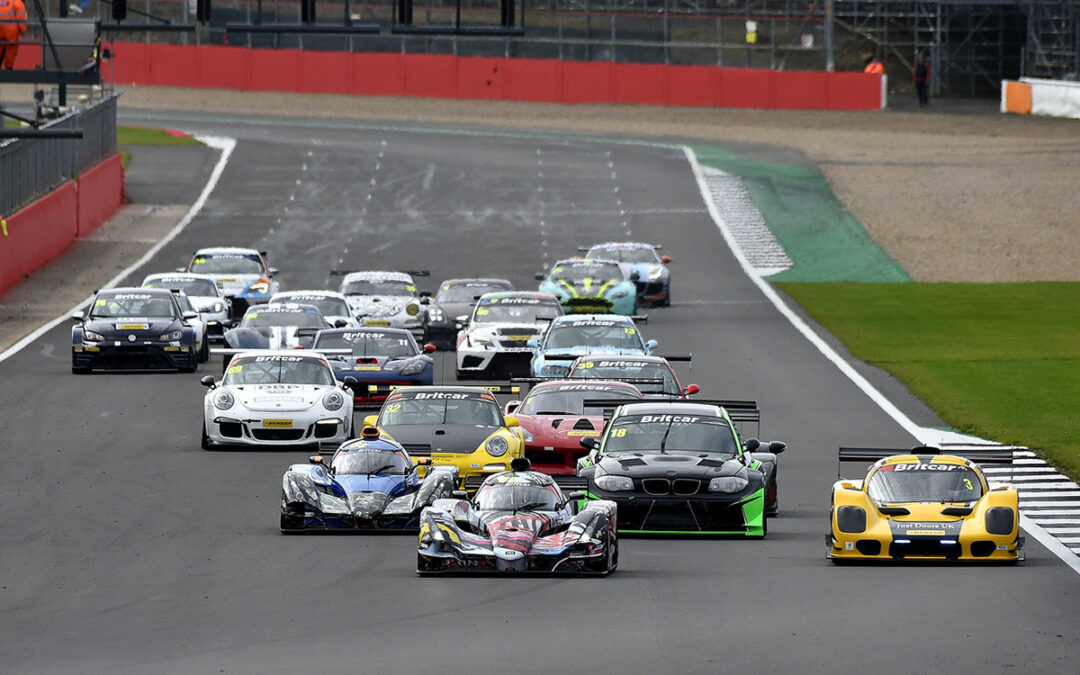 Jem Hepworth and Danny Harrison took the VR Motorsport Praga R1 "art car" to a hard-fought win in Race 1, after a first-corner incident put Jem way down the field.

The #85 Praga had secured pole in the earlier qualifying session held under tricky conditions, which saw Jonny MacGregor, fired-up after putting his Taranis in the gravel in his first do-or-die attempt at pole, join the Praga on the front row of the grid, though still two seconds shy of the pole sitter.

In a fraught start, Jem Hepworth got out of shape in the first corner, causing Ben Sharich, starting in the Taranis, to brake and take avoiding action, while the rest of the field scattered around the issue; "I saw the tail of the Praga go out, then was confronted by a cloud of grey smoke – I braked hard as I didn’t want to hit the Praga, but I saw the Radical go straight through. Perhaps I should have done the same" said Sharich later. There were winners and losers coming out if this melee, chief amongst the winners being Mark Cunningham, always a fast starter anyway, and Mike Moss, the Porsche and the BMW coming round first and second at the end of the opening lap, with the positions reversed next time around. Moss maintained that lead for several laps, before a recovering Jack Fabby in the blue Praga R1T took over the leading position, which he held until pitting on lap 29, by which time he held 55 second lead over Steve Burgess in the Radical Coupe.

There had been action through the field; Mike Moss, in the rejuvenated BMW 1M, was keeping the Radical in sight, while Tom Bradshaw’s BMW M3 and Mark Cunningham’s Porsche were close together, heading classes 4 and 3 respectively. Paul Bailey was holding station in his Ferrari 488, Martin Byford’s SEAT TCR was dicing with the Motus One Ginetta G55 of Will Powell, and Britcar returnee Ed Pead, in the In2Racing Porsche Cayman was contending with the recovering faster cars of Jem Hepworth and Ben Sharich.

Hepworth and Sharich were among the first to take their mandatory stops, along with Bailey and Moss, and once late-stopper Fabby had handed over the blue Praga to Garry Townsend, and the race settled again, we had Danny Harrison’s art car Praga in the lead, having made good use of the "undercut" and got some fast laps in during the pit window. There was no stopping Harrison then; punching in a fastest lap early into his stint, he finished one minute – that’s nearly a lap – ahead of Ben Dimmack, who had relieved Burgess in the Radical (which had worryingly cut out at one point), and Ross Wylie, who had taken over from Paul Bailey in the SB Race Engineering Ferrari 488. Wylie, in fact, only just made that final podium spot, as for much of the second half of the race he had no answer to the Moss BMW 1M, which had been rapid in the hands of Andy Schulz. Despite a stop/go penalty for a pit stop infringement, Schulz maintained a healthy advantage over the car he helped win last year’s title in, the Ferrari only getting past on the final lap, when the BMW slowed, getting very hot, with alarms flashing and a cabin filling with fumes. Garry Townsend couldn’t match Jack Fabby’s earlier pace in the erstwhile leading Praga, and came home fifth, ahead of Jonny MacGregor, who had got the best out of the Taranis after Ben Sharich’s early incident and subsequent claw-back. 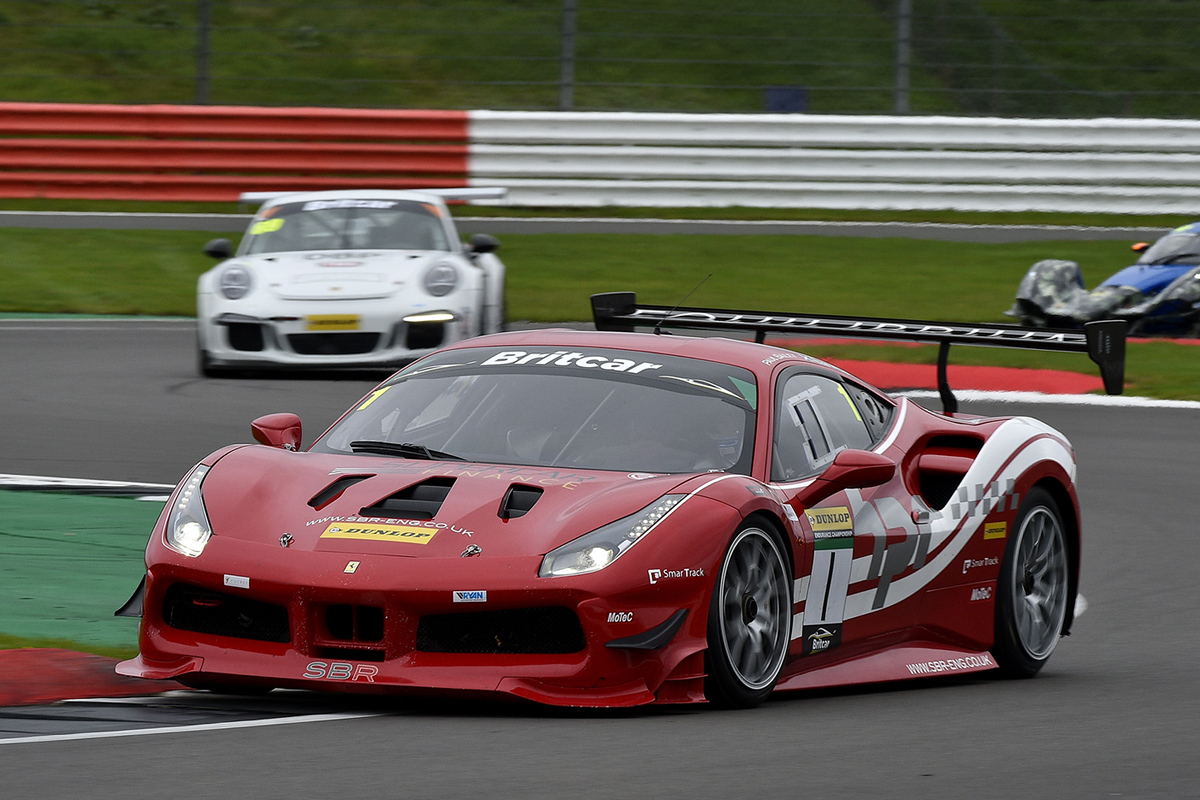 Fuel played a significant role in this race – Class 4 frontrunners Tom Bradshaw and Jonathan Evans in the CRH BMW M3 had been mixing it with the classes above, but a splash and dash seven minutes from the end dropped them to an atypical seventh in class, while the SG Racing Porsche 997 of Mark and Peter Cunningham threw away a definite Class 3 victory after running out of fuel on the last lap. Capitalising on the misfortune in Class 3 were Dave Benett and Marcus Fothergill, enjoying renewed vigour in their Porsche 991 and snatching the class win, while in Class 4, it was a return to normal service for Ash Woodman and Martin Byford in the EDF-run SEAT TCR, in the thick of it and taking the class win ahead
of Will Powell and Dave Scaramanga in the Ginetta G55 of the Silverstone-based Motus One team, with the Reflex Racing Ligier of Marcus Vivian and Luke Davenport taking the final podium spot. The competitive Class 4 also highlighted impressive performances from Aaron Morgan and Bobby Trundley in the Team Brit Aston Martin Vantage, lone driver Peter Erceg’s Porsche Cayman, and Matthew Sanders and Jack Layton in the Amspeed BMW M3, while there was disappointment for Nicole Drought and new driving partner, Carrera Cup exponent Lorcan Hanafin, in the Valluga Cayman, an early clash causing an investigative pit stop which stymied the chances of a good result, the Newbarn Jaguar F Type of Adam and Callum Thompson, which struggled with gearbox issues, and Tim Docker retired the Maximum Motorsport VW Golf a few laps from the flag after a massive spin.

The Invitation entries had some stories too – the Simpson Audi RS3 was the best-placed in Class 4, rallying expert Sacha Kakad leaving the car in a good position for first-timer Hugo Cook (son of former Britcar race winner Peter Cook) to run to 17th place, ahead of the Mark Jones / Robert Taylor SEAT TCR, absolute beginner Andrey Borodyn, who was assisted by the vastly experienced Ed Pead in the In2Racing Cayman, and father and son duo Mark and Dale Albutt’s Aston Martin Vantage, Mark enjoying his second race meeting after a 14-year lay-off. Class 3 invitee Ian Heward nursed an ailing clutch in the Porscheshop Porsche 997 towards the end of the race, after losing an amount of time in the pits to fix some structural issues during Darelle Wilson’s opening stint.